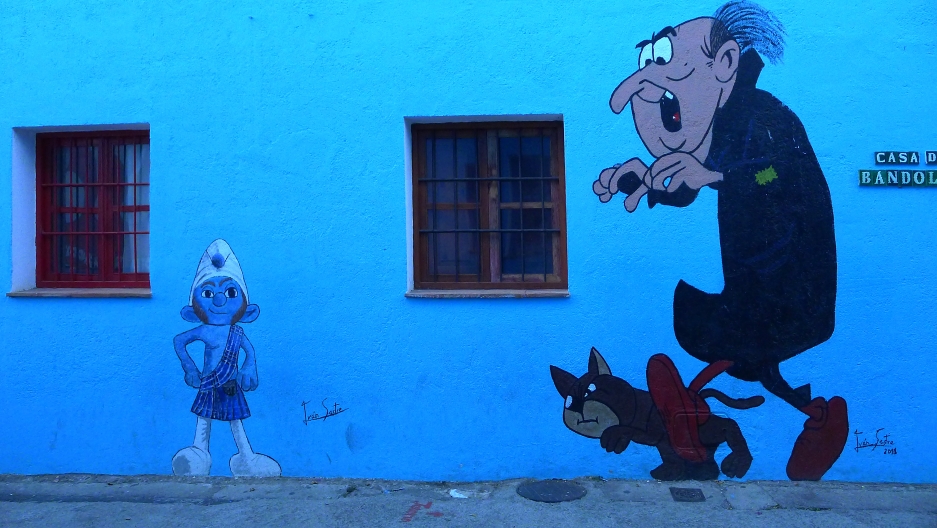 Smurf characters adorn many of the walls in Juzcar. Tourists come from around the world to see the world's first ever "Official Smurf Village."

After six years of crisis in Spain, people are getting creative to make ends meet. So small businesses and small towns — even cities — are breaking new ground. You'll see how in this video from reporter Gerry Hadden (he's the one dressed as a smurf) and Armando Guerra, or read more below.

For most sleepy commuters on Madrid’s metro, the recorded voice announcing the next stops is just more white noise. But as the Number 2 Line approaches the city’s historic center, La Puerta del Sol, you hear something new.

That’s Vodafone, as in the British telecom giant. This summer, the region of Madrid sold the name Puerta del Sol to Vodafone for nearly 2 million dollars.

Many commuters are aghast, but resigned.

One man, Tomas Sobra, said “Vodafeen, Vodafaan, I’m against the idea of selling the name to anyone.”

“I can understand that there might be some sentimentalism around the traditional name,” he said. But he admitted that, from an economics point of view, being able to commercialize these places was very important. “It’s essential to our campaign.”

That campaign seeks to raise between 10 and 15 million dollars a year, to offset the Metro's operating costs. Every little bit helps, Gonzalez said. Madrid is currently Europe’s most indebted city. It owes creditors 10 billion dollars, after years of borrowing for huge construction projects.

Making matters worse, tourism has plummeted 22% this year. And the city just lost its bid to host the 2020 Olympics.

To compensate, the city is selling more than just its names. Formerly-protected historic buildings are on the block, as is artwork. Whatever can go, must go. You might call this the fire-sale approach to solvency.

Some 500 miles away, in a little town called Alhama de Murcia, the Perea family is also selling to survive. Selling food, that is. They have a restaurant. A couple of years ago, it was dying like many eateries in the area. Then owner David Perea had an idea: to make a TV series — about the restaurant itself. The cast: his family, from his kids to his wife to his in-laws. It’s comedy on a shoe-string.

In one recent episode, cousin Manolo goes into a trance after playing video games too long.

“We’ve lost him,” someone says. “And just when the government has cut funding for home healthcare,” says another.

The whole thing is charmingly amateur. Which is what director — and restaurant owner — David Perea said he’s after.

“Viewers might say our technique is terrible,” he said, “but it’s really fresh.”

Perea even ropes me in, having me deliver an off-the-cuff cameo as myself. Sort of.

“Good evening,” I ad-lib, “I’m Gerry Hadden reporting live from the White House, with very important news tonight. A restaurant in Murcia, Spain, is becoming extremely famous for its food, and for the weird people who work there….”

You can see the White House projected behind me on a blue-screen. Perea’s entire family watches on, giggling.

“And the name of the restaurant is — “

The episode ends in failure, as the TV signal gets cut just before I announce the restaurant’s name to the world.

But the Pereas hardly need more publicity. The series is on regional TV every week, beamed into tens of thousands of homes. The dinner lines at the restaurant have grown long.

So that’s how one family’s doing it.

A day’s drive away, in the mountains of southern Andalucia, a whole town has banded together to beat the crisis. Banded together in blue.

Juzcar is the world’s first official Smurf village. Every house, with the exception of one hold-out, has been painted that tell-tale blue. Mayor David Fernandez said he was approached by a publicity group a couple of years back, just as Sony was filming Smurfs 2, the sequel.

“Given our location,” said Fernandez, “the beautiful mountains, the small town atmosphere, and the large quantity of mushrooms that grow around here, this was the perfect place.”

Once the city was painted blue, Juzcar residents really got into it. There are huge statues of Smurfs everywhere. In the main bar, you can order blue spaghetti. On the weekends, there’s an outdoor Smurf market. All of this has put Juzcar on the tourist map.

Mayor Fernandez said that becoming Smurfville marked a real before and after for the village.

“We have eight new businesses catering to tourists,” he said. “There’s joy now, and a sense of hope for the future.”

Which, after six years of declining economic prospects in Spain, is no small thing.