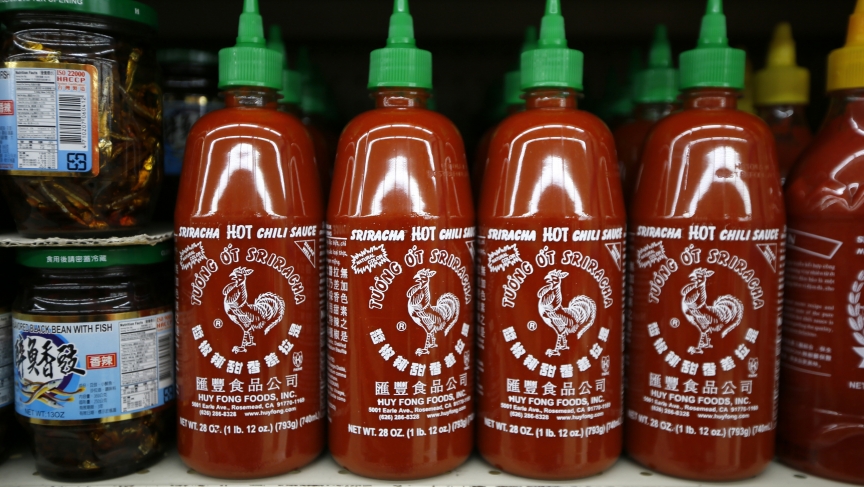 Bottles of Sriracha hot chili sauce, made by Huy Fong Foods, are seen on a supermarket shelf in San Gabriel, California October 30, 2013.

We recently told you about the success of Huy Fong Sriracha hot sauce.

You know, the bottle with the green cap and the rooster on the label.

Well, Sriracha is back in the headlines.

Fumes of the fresh jalapeños processed at the Sriracha factory in Irwindale, California are, apparently, burning the eyes and throats of people living in the area.

So the city asked a judge to stop production at Huy Fong until the issue could be resolved. Buyers feared a spike in price. News just broke that the judge denied the city's request.

Breathe easy. Your pho is safe.

But if you think living next door to a pepper factory is bad, try working in one.

Horticulturist Stephanie Walker used to harvest jalapeños at one of the largest pepper processing plants in North America. Now, she works with the hottest peppers in the world at the Chile Pepper Institute in Las Cruces, New Mexico. She says complaints of burning eyes and throats show a very real risk in dealing with peppers.

"The capsaicin chemicals found in peppers are irritating to the skin," she says.

Thankfully, there's only a week left of chile processing at the plant. The company plans to address the issue before the next harvest.

Until then, don't touch your eyes.

Does your city have a particular factory aroma? Say, chocolate or beer? Let us know in the comments below.