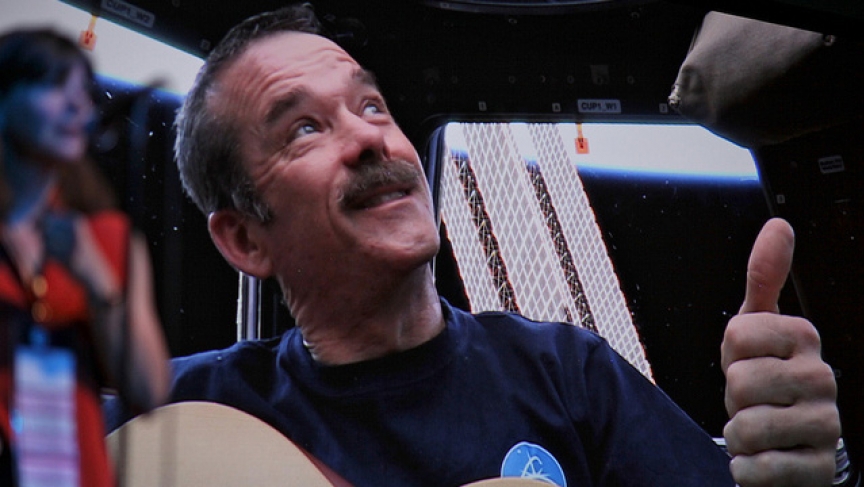 Not even a hundred people have had the opportunity to walk in space. Canadian astronaut Chris Hadfield is one of them.

He's actually walked in what he calls the "bottomless pit of the texture of the universe" twice.

"What really overwhelms everything is, if you just glance up to the right, the whole world is pouring by in this onslaught of visual explosion of beauty. But what's weird about it is its dead silence. It's like standing by a raging fire and it's just silent," said Hadfield.

All of that majesty, and what did Hadfield do while in space? He brought that bottomless pit of texture a bit closer to you and me.

You might recognize Hadfield from the numerous YouTube videos he uploaded on everything from how to brush your teeth in space, to what happens when you get a hand towel really, really wet and you wring it out. He even made a music video of David Bowie's "Space Oddity."

Hadfield decided that he wanted to be an astronaut when he was 9 years old, as he watched the first moon landing.

"I watched Neil and Buzz walk on the surface of the moon and I just thought they were the coolest guys ever."

And being a kid from Canada where, at the time there was no space program, really didn't seem like a huge obstacle to 9-year-old Hadfield.

"I figured it was impossible to walk on the moon this morning, so what the heck I'll give it a try," said Hadfield.

Hadfield chronicles his "try" in his new memoir, "An Astronaut's Guide to Life on Earth." His tale moves from a cottage on Stag Island, Ontario to the Yuri Gagarin Cosmonauts Training Center in Star City, Russia, to walking around the universe and, of course, life back here on earth.