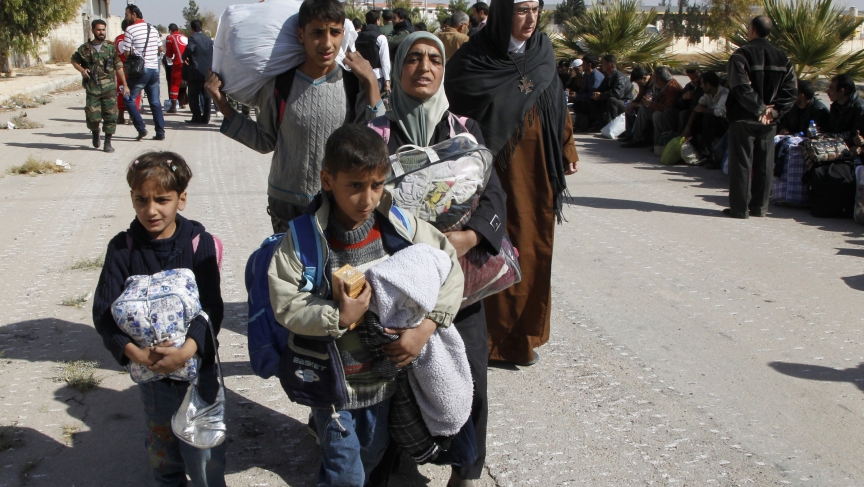 Syrian families were allowed to flee rebel-controlled Moadamiya Tuesday, in a rare instance of coordination between the Syrian government and the opposition.

If you live in one of the rebel-held communities that ring Damascus, you might feel as though a noose has dropped around your neck.

Syria's regime is squeezing many opposition strongholds, making it more difficult for residents to move in and out and get basic supplies, like food and medicine.

Yesterday, the government allowed some 500 women, children and elderly residents to leave Moadhamiya, a rebel-held community southwest of Damascus. According to Wall Street Journal correspondent Sam Dagher in Damascus, that leaves about 8000 rebels and civilians in the enclave, scraping by on dwindling supplies.

"It seems like the government is trying to give these rebels in Moadamiya an ultimatum: 'Do you want to surrender, or do you want us to go in and storm the town and gain control of it that way?'" Dagher says. "I think there are some tense negotiations now."

Dagher says Syria's government has sealed off other contested Damascus neighborhoods, and usually erects one or two checkpoints that residents must pass through in order to enter or exit.

Hezbollah, the Shi'a Islamic militant group that holds significant political power in Lebanon, is working with the Syrian regime to seal off the communities and clear the rebels from their strongholds.

"The government has besieged a lot of these areas and is pounding a lot of these areas with artillery, rockets and dropping bombs by air on almost a daily basis," Dagher explains. "The only way for reporters to get into these rebel-controlled areas is to be smuggled into the neighborhoods."

Dagher says, just a few months ago, rebel sympathizers from elsewhere in town would drive by Moadamiya and toss grocery bags of food out of their car windows for local residents. Even that meager food drop, he says, is now impossible.