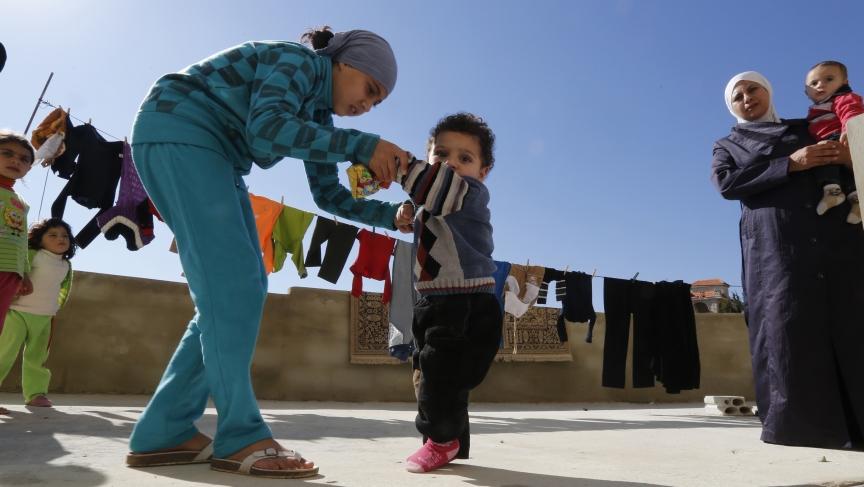 A Syrian refugee girl helps her brother, who the family suspects has polio, to walk as their mother watches in a mosque compound in Shebaa area, southern Lebanon October 28, 2013.

A few weeks ago, UN officials heard about the discovery of a group of paralyzed children in the city of Deir al-Zour in eastern Syria. Lab tests have now confirmed 10 cases of polio.

It's the first confirmed outbreak of polio in Syria in the past 14 years.

"It's certainly very alarming and concerning," says Oliver Rosenbauer, a spokesman for the World Health Organization.

Polio is caused by a virus, and spread through consumption of food or liquid that's been contaminated with feces. It causes paralysis of the arms and legs. The World Health Organization has been trying to eradicate it.

"It's a very devastating and painful disease," Rosenbauer says, adding that children under the age of five are most at risk.

And he notes that it will be hard to fight polio in Syria, with the war raging. Polio is a highly contagious disease and can spread silently for a long time before it's detected.

Add to that the fact that thousands of Syrians have fled their homes to neighboring countries, potentially bringing the virus with them. So Rosenbauer says the World Health Organization plans to not only immunize children in Syria, but also in neighboring Turkey, Iraq, Jordan, and Lebanon.

He says polio can be controlled, and points to the recent outbreak in the horn of Africa, centered around Somalia, where immunization efforts have led to a rapid decline in cases.

Some experts speculate that jihadist fighters might have brought the polio virus into Syria from their home countries.

The UN estimates that up to half a million Syrian children have not been vaccinated against polio due to the war. Before the war, the vaccination rate was at 95%.

The Syrian government is concerned and has begun an immunization campaign, as well. And polio is not the only disease that's causing concern in Syria. The World Health Organization has also reported increases in cases of measles, typhoid, and hepatitis A.