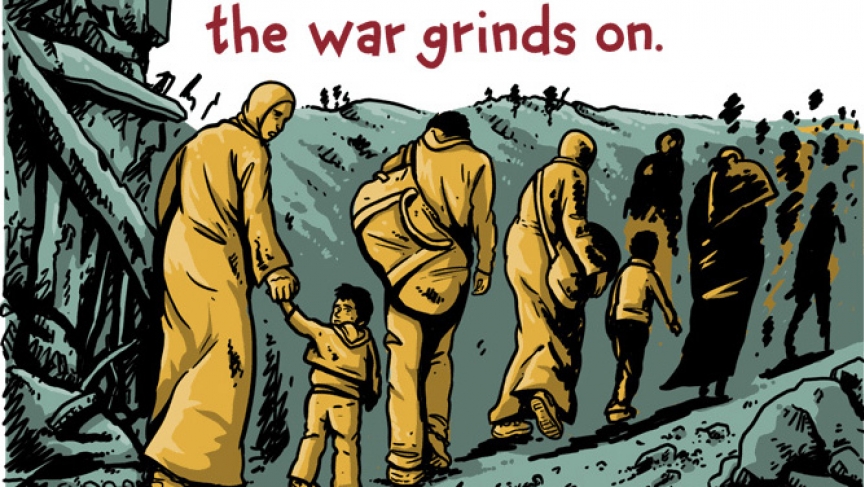 A panel from Andy Warner's "The Displaced."

The United Nations estimates that more than 2 million Syrians have fled their country. That is almost 10 percent of the population. If it keeps up, the UN says, fully half of the entire Syrian population could be displaced, either internally or externally, by the end of next year.

It's a humanitarian disaster, a mass displacement of humanity on a scale unseen since the Rwandan genocide two decades ago. And from his perch in the San Francisco Bay Area, Andy Warner is trying to draw attention to it.

Warner is a cartoonist, a journalist whose medium is pen and ink. And his most recent work for Slate, called "The Displaced,” focuses on the millions of Syrians who have been forced to flee their homes.

“This is one of the most devastating humanitarian crises right now. It's worse than the refugee crisis during the Iraqi civil war.”

Warner says that, in the wake of the recent attention on Syria's chemical weapons, he wants to remind readers that the refugee crisis continues.

“Chemical weapons are an absolutely ‘nightmare’ thing, and a focus on them is justified,” Warner notes. “But to the exclusion of the fact that by the end of next year, the UN estimates that fully half of Syria's population will be either internally or externally displaced, I think is losing the forest for the trees.”

“Solving the diplomatic crisis surrounding the chemical weapons,” he continues, “will not solve the Syrian conflict.”

Warner's interest in using cartoons to tell stories from the region goes back to 2005, when he lived in neighboring Lebanon. And, as he puts it, you can't really learn about Lebanon without learning about Syria.

Warner then returned to Lebanon in 2011, when violence was just beginning to spread throughout Syria, but no one was yet calling it a civil war.

“It just escalated, and escalated and escalated. It seems like a crisis that was slowly just getting worse and worse, and never quite in the news cycle as much as it should be, until this year. This year's changed things, and you can see that in the refugee numbers, actually.”

Warner's latest work focuses on those numbers. More than half a million Syrians are now in Turkey, and another half million in Jordan. More than three quarters of a million, he notes, are in tiny Lebanon.

And while much of the media attention has focused on refugee camps built to help displaced Syrians, Warner says that the vast majority of the refugees are not in camps.

“Individual families are taking people in. Syrians are living throughout the region, and not in these concentrated areas.”

And, as Warner notes in "The Displaced," the UN's humanitarian appeal to the international community to tackle the Syrian refugee crisis has fallen short. The UN asked for more than $5 billion, but has to date received less than half of that.

As for himself, Warner says he's looking for ways, and, above all, the means, to get back to the region.

But for now, he continues to try to help people understand the Syrian conflict from a distance. For story ideas, he says he does tons of research, and talks regularly with his contacts in the region.

He drew a comic recently that delved into the history of the Assad family, and one that looked at the 1949 coup in Syria, in which the CIA may have been involved.

I asked him why tackle stories like this with pen and ink cartoons.

“Because it immediately draws you in,” he told me. “I think that having that engagement with the reader can make it that much more powerful, can make it stick, make people want to share it with other people.”

To put a human face, in other words, on the numbers.

As Warner writes at the end of “The Displaced”: "The Syrian refugees are not just a mass of humanity. These are individual people. They have lost homes, they have lost loved ones. They now live in poverty and danger."

And, Warner emphasizes, "the war grinds on."