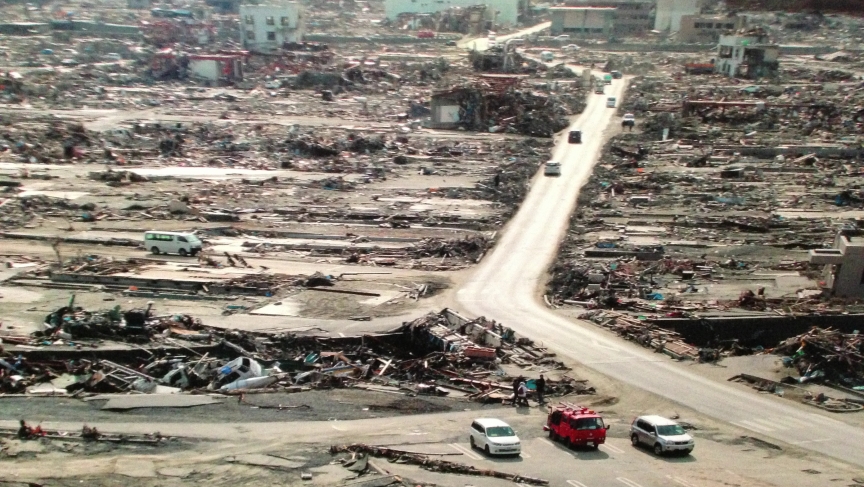 The Japanese town of Minamisanriku in the Miyagi Prefecture was destroyed by the 2011 tsunami.

Hurricane Sandy left the Rockaways neighborhood in Queens devastated. Jen Poyant's home was flooded. And as she and her neighbors lived through the long recovery, Poyant wondered if their experience was similar to those caught in the faraway disasters she had followed.

"It was difficult coming back after the storm," Poyant recalls. "People were walking around for days, just listless, trying to figure out where to begin."

Poyant and her family waited a month and a half before they were able to move back into their home again. Some neighbors lost their homes.

"As a way to process my own experience watching my own community go through this," she says, " I decided to apply for [a] fellowship." Poyant is a producer for PRI's program The Takeaway.

At the East-West Center in Honolulu, she studied how disasters are managed. Then, she went to China and Japan to visit communities that had been devastated by earthquakes.

She was surprised at the different attitudes. "In New York, the expectation is very high. It's 'get me the money now to rebuild my home. I can't believe it's been a year and I can't wade through this bureaucratic process.'"

"In China, you don't really talk about the government and what the expectation is," says Poyant, "you just take what you can get." In Japan, Poyant says, the culture has been to trust the government.

Poyants says it's only been over the past couple of years in Japan when people, 'watching mistake after mistake with the handling of both Fukushima as well as the immediate aftermath of the tsunami, have residents and voters managed to start speaking out about their frustrations and what they need. But there is a measured expression of frustration with the Japanese government, for the first time."

She says that in China, after the devastating earthquake in Sichuan province in 2008, some of the buildings have been left as a remembrance of what happened and of those who died.

In the much more recent earthquake and tsunami in 2011 in Japan, Poyant says, "the debris is gone, but the buildings are gone as well in many cases." The rebuilding continues.