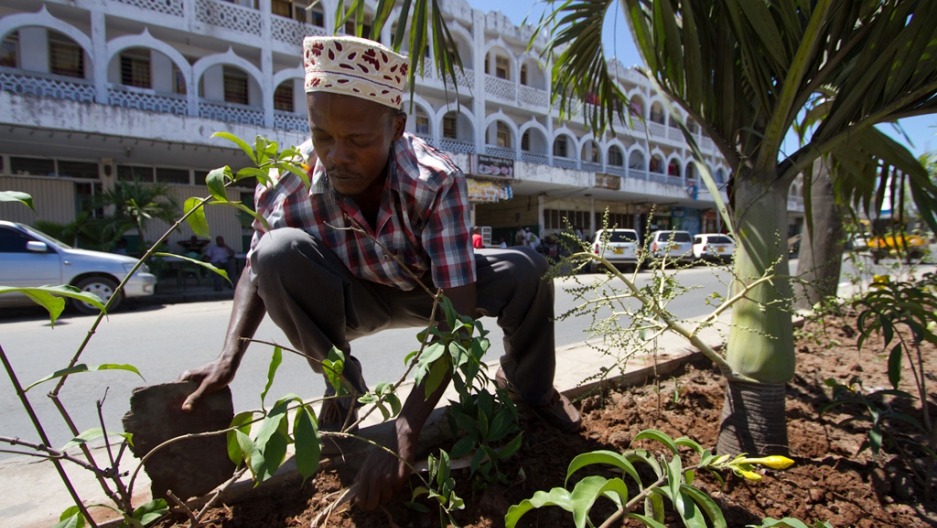 First, piles of trash formed outside restaurants and shops here in Kenya’s island city. Then traffic jams brought downtown Mombasa to a standstill when, after two agonizing months without a paycheck, most of the city’s 2,600 public workers went on strike in protest.

Three years ago, such organized action would have been illegal in Kenya. But a clause in Kenya’s new 2010 constitution explicitly guarantees workers the right to organize, bargain collectively—and to strike.

And so, when Mombasa officials reacted to the strike by going to court to force workers back to their jobs, the judge ruled in favor of the workers. In a matter of days, Mombasa’s city employees were back to work with pay after officials scrambled to fix the glitches in the county’s new payroll system that had caused the problem.

As workers across Kenya look to benefit from their progressive constitution, Mombasa’s public sector may serve as a model for what the new standards can accomplish.

But the new constitution inadvertently created a problem for workers, too: It radically altered Kenya’s system of government by delegating everything from tax collection to oversight of public sector employment to 47 different county governments. It’s this new division of power that caused the payroll problem in Mombasa in the first place, as officials rushed to implement this system for the first time.

Not every county is as fortunate as Mombasa when it comes to labor rights. The new system was designed to encourage political engagement by Kenyans whose elected officials are notorious for living in Nairobi, far from their constituents and widely unaccountable for their inaction.

Well intentioned as it was, now instead of addressing labor grievances in one central Ministry of Labor or through legislation in Kenya’s national Parliament, workers must fight to get small, underfunded and often unsympathetic local bodies to adhere to their new constitutional responsibilities.

“That’s one of the main concerns of unions—are we going to see different standards county to county on enforcement law?” Mohamud said. “You could see one county where labor laws are enforced in full and others where it isn’t at all.”

Mombasa County, home to Kenya’s second largest city by the same name, has a long history of enforcing and advancing workers rights. It was here that organizers persuaded Kenya’s Parliament to adopt the 1984 “Mombasa Shop Hours Act” that established a 49-hour workweek, a maximum 12-hour workday plus time for meals and vacation on public holidays. The law applied only to Mombasa.

For nearly four years now, a union that comprises some 6,000 dock workers at Mombasa’s port has successfully stood down attempts by Kenya’s Ministry of Finance to privatize part of the port—a move union leaders fear would lead to massive layoffs.

Today, some workers in Mombasa say they earn relatively generous salaries. In a country with a minimum wage of just 4,800 shillings (about $60) per month, Abdrahaman Omar says he earns 30,000 shillings ($350 US) per month weeding and maintaining the medians of Mombasa’s boulevards as a city gardener. That is three times the wage he earned 13 years ago, when he was originally hired for the job.

Some of the biggest beneficiaries of Mombasa’s progressive tendencies on labor rights are women, some of whom now hold substantial positions in local government. Patience Mshenga, women’s leader of the Mombasa County workers union, says female public employees earn exactly the same wages as their male counterparts in comparable positions.

But the fact that Mombasa has become a sort of best-case paradigm when it comes to improving workers’ rights may have less to do with Kenya’s progressive new constitution as with the county’s exceptionally productive economy.

“Mombasa is a special case. Because of the port, there’s a lot of employment in the public sector,” said Hanad Mohamud, East Africa director for Solidarity Center, the labor rights non-profit. “It’s not just the port, it’s [also] a major tourist center … that makes Mombasa county better off than other counties would be.”

Mombasa’s workers also owe much to a fortuitous alignment of progressive courts and their recent election of a pro-labor governor.

Although Kenya’s new constitution took effect in 2010, funding to local governments just began this year, making it too early to predict how it will impact workers in the nations’ numerous counties, said Mohamud. But he says precedents set by recent labor violations give cause for concern.

In recent years, “Employers have retaliated against union organizers or simply refused to recognize unions, particularly in export processing zones,” according to a 2012 report by the Washington-based watchdog Freedom House. “It will take considerable effort to harmonize Kenya’s existing labor laws with the new constitution.”