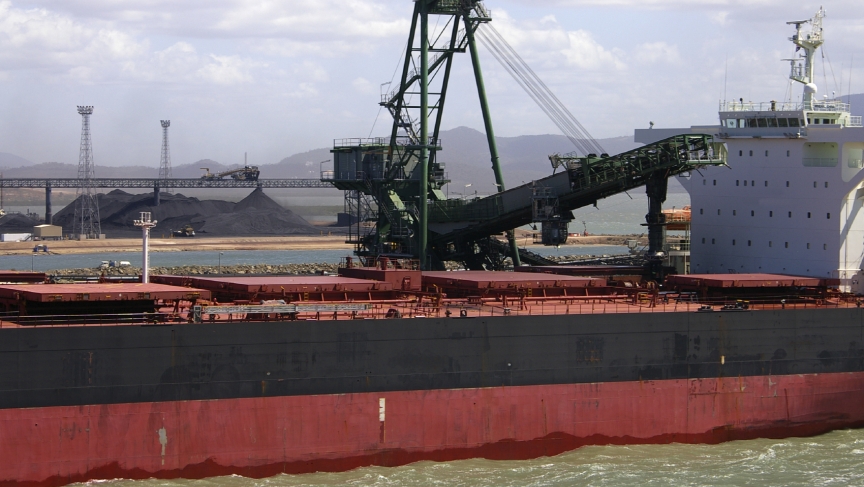 A coal shipping terminal like this one, planned for Cherry Point, in Washington's Whatcom county, north of Seattle, would be the largest coal export facility on the west coast.

Not long ago, the big dramas over fighting climate change played out among political leaders in places like Copenhagen and Washington, DC. Now, they’re playing out in a small neighborhood in Bellingham, Washington, up the coast from Seattle.

And Isabel VanDerSlice is one of the local foot soldiers. She’s canvassing  for an environmental group, and a knock on a door in a well-to-do neighborhood has brought a prized response: a voter who’s still undecided in this year’s hotly contested Whatcom county council race.

On the issue that’s dominating the race, the voter tells VanDerSlice that she’s still “kinda half and half.” But others around here are making their positions clear. Yards are peppered with signs reading “No Coal Trains,” or “Stop the War on Workers.”

The issue behind the signs is a proposed shipping terminal that would send coal from Wyoming and Montana onto ships bound for Asia. It would be the largest coal export facility on the west coast, and a lifeline for a sagging US coal industry. So it’s become a big target for environmentalists. Coal burning is one of the major contributors to climate change.

“There’s a lot of eyes across the country and around the world watching what’s happening this fall in Whatcom County,” says Brendon Cechovic, Executive Director of Washington Conservation Voters.

There’s also a lot of money flowing into the election. In the past, county council candidates spent maybe $20,000 each to get elected. But this year, Washington Conservation Voters has so far spent almost a quarter of a million dollars.

The lion’s share of that money has come from one man, a California billionaire and environmentalist, Tom Steyer. And until recently, Steyer's money had helped coal opponents outspend supporters by more than three to one.

But the environmentalists are losing their lead in the election spending arms race. Pro-coal forces have formed a new PAC called Save Whatcom, and most of its funding is coming from large companies that want to see the terminal built.

But with spending approaching a million dollars, it seems the Whatcom county council election has become a proxy for a national climate policy debate that's largely at a stalemate.

A year ago, super-storm Sandy sounded an alarm bell about the growing threats from climate change. Politicians from New York Mayor Michael Bloomberg to President Obama followed by announcing new steps to address the threat. But national climate policy in the U.S. remains largely caught in Washington gridlock.

So that has pushed some very big issues down to lower levels of government, says Ross MacFarlane, a senior advisor with the environmental nonprofit Climate Solutions.

Voting in the Whatcom county race is already underway by mail and will continue until November 5. Anti-coal activists say they need to pick up two seats to get a majority on the council. But whoever wins, it could be more than two years before the council actually votes on the coal terminal project.