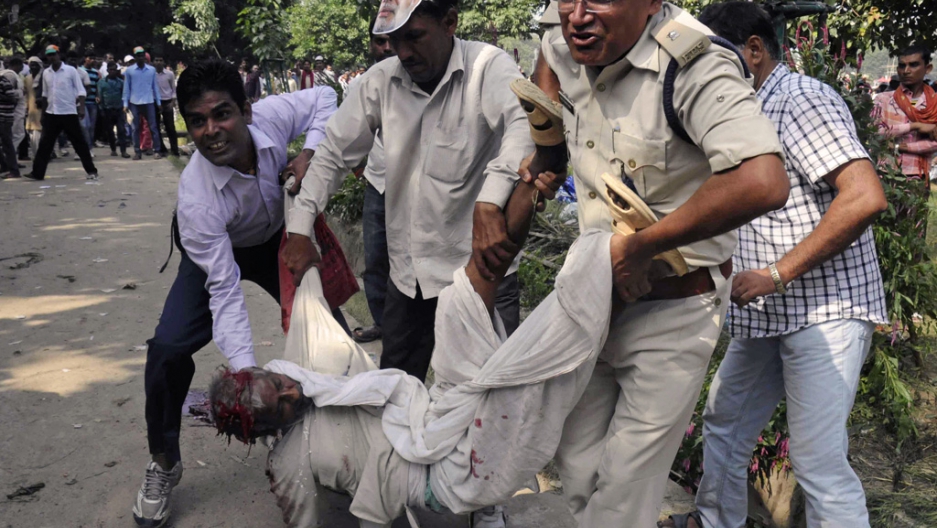 An Indian police deputy superintendent and other bystanders assist an injured man when a series of bombs went off during an opposition Bharatiya Janata Party (BJP) rally in Patna on October 27, 2013.
Credit: STRDEL
Share

PATNA, India — Bihar state in India is a land of faith and murder, belief and bombs. The most recent went off yesterday at a massive rally here for the BJP, the Hindu nationalist party.

Six people were killed and 83 injured.

The first bomb exploded at Patna's railroad station several hours before the rally, and six others detonated at the edges of the crowd. Another went off downtown.

Today police arrested a suspect. One news agency named him as a Muslim who is believed to be part of Indian Mujahideen, a radical terror group. Early reports say he confessed that he had organized a couple of teams to set off a series of small explosions in the hopes of causing a stampede.

On the surface this seems a strong possibility; there is a long history of tension between BJP supporters and India's Muslim community. Yesterday's violence occurred at what was called the "Hunkar" rally in Gandhi Park.

Hunkar means war cry and it is a suitable description of the BJP leader Narendra Modi's speaking style. With his white hair and beard, his face smiling from posters all over India, he looks like a cheerful professor. On stage addressing a mass rally he is something else altogether: an electrifying demagogue.

Modi has contributed to the tension with inflammatory speeches. While he was governor of Gujarat state 1000 Muslims were killed in sectarian riots.

But Modi is a crafty politician. With a good chance of becoming India's next prime minister, he has begun reaching out to India's Muslim community of 176 million.

History suggests that solving this crime will take more investigation. In July, a bomb exploded outside the Mahabodhi Temple in Bodhgaya, 100 kilometers south of Patna. The temple stands where Buddha is said to have found enlightenment and is a major pilgrimage place for Buddhists from all over the world.

Muslim terrorists were suspected of the crime. But I have been in Bodhgaya for the last few days, and the locals I spoke with said they do not believe that the bomb was an act of sectarian violence. This may prove to be true of the Patna bombing as well.

Regardless of who was responsible for the attack, it was the strangest security emergency I've ever witnessed. At Patna airport after the bombs went off, there was no security lockdown. Police and other security officials joked with several dozen well-wishers who waited for Modi at the airport. The atmosphere was relaxed, especially considering bombs were exploding a kilometer away.

What is certain about yesterday is that Modi can draw a crowd.

As dawn broke, the road from Bodhgaya to Patna was jammed. People had woken early to pray at local shrines and then catch busses to the rally.

Bihar's poverty is epic, its corruption legendary. Life there challenges the reports of India as a coming economic superpower. Bihar looks like a war zone, though there has been no war.

Modi's appeal to Bihar's nearly 104 million people is based on his record as chief minister of Gujarat state. There he took a similarly impoverished area and through force of will and a puritan's hatred of corruption cleaned it up and brought economic growth.

In this country, whose economy is slowing down dangerously, Modi's track record in Gujarat has an appeal that might just transcend India's sectarian divides and put him in power, no matter how many bombs go off.