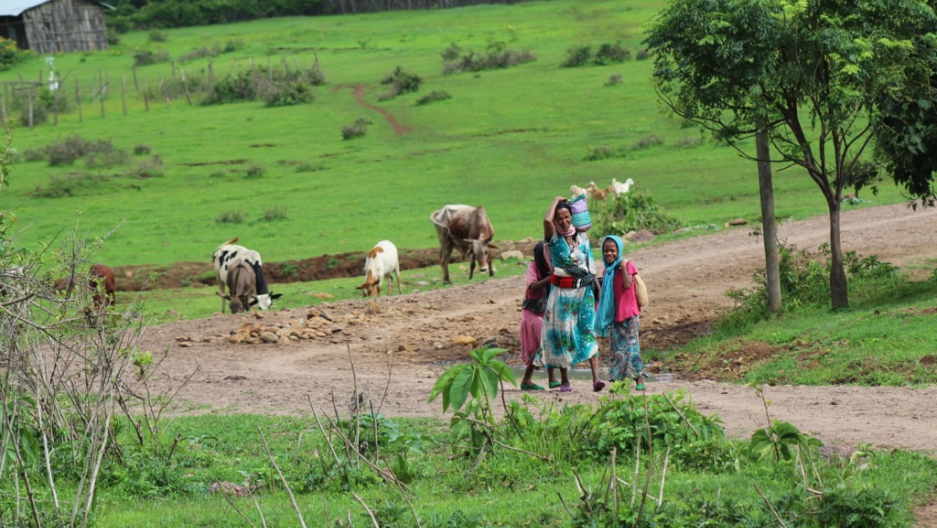 A woman and children return from the fields in Awra Amba.
Credit: Gino Kleisen
Share

AWRA AMBA, Ethiopia — For decades, governments and NGOs have been trying to find ways to break the aid dependence that has dominated much of post-colonial Africa.

So when the small northern Ethiopian village of Awra Amba, population 460, found its own way to reduce poverty and increase development, officials from the national government to the World Bank sat up and paid attention.

Ethiopian Zumra Nuru founded Awra Amba on an alternative cultural model, built on the principles of gender and social equality, the absence of organized religion, and the importance of hard work.

The model has paid off: Some 40 years after its founding in 1972, literacy levels, life expectancy, gender equality and economic growth in the village far exceed Ethiopia’s national averages.

Eager to learn its secrets, consultants from the Ethiopian government, the World Bank, and development organizations like Oxfam International frequently visit the village in a bid to discover what Awra Amba is doing right.

But while rethinking norms has brought the village both accolades and success, it has also attracted a fair share of trouble.

Ethiopia is a highly traditional country, where many communities follow strict religious and cultural mores. Since day one, the Awra Amba project, which lies a nine-hour drive northwest of Addis Ababa, has met with hostility and violent attack from the conservative Christian and Muslim communities that surround it.

Awra Amba’s model is highly egalitarian. Most of the village’s labor force — in the early days, concentrated in agriculture — works communally, so money is plowed back into village projects and the profits split evenly. The village is run through a series of popular committees where majorities agree on all bylaws and village decisions.

Neighbors see their way of life as pagan or heretical, says leader Nuru.

“They threw a grenade right into the center of the village once but luckily no one was hurt,” he says. “They have tried shooting members of our village. They have sabotaged our harvest on occasion.”

But the situation was far worse in decades past. In 1989, Nuru says, neighboring villages denounced the inhabitants of Awra Amba as insurgents to the communist Derg regime then in power, leading to the community’s exile to the south of Ethiopia for four years. In spite of being more ideologically aligned with the regime than the religious communities that reported them, Awra Amba residents were seen as adding to the unrest during a time of internal strife and heightened paranoia. The totalitarian regime, which was clinging to power, cracked down.

The community returned home in 1993 to find most of its land confiscated by its former neighbors. Only 18 hectares remained, a disaster for an agricultural community. The years that followed were the worst in village history, community members say.

They were also the most crucial, forcing the small society to transition away from subsistence living.

Limited land forced the returned people of Awra Amba to diversify the village economy beyond its own small borders. They got into textiles, milling, trade, and tourism. Today in Awra Amba, a clutch of wattle and daub houses sits beside shared buildings such as weaving workshops, a grinding mill, a tourist hostel, and a school. The variety of industries has been key to its development success.

Over the last two decades, the combination of Awra Amba’s progressive values with its new market savvy has made it a model of progress in a nation that is currently ranked at the bottom of the UNDP Human Development Index.

Founder Nuru himself grew up a Muslim in the traditional Amhara region of northern Ethiopia. But the customs never felt right to him: he was sent to work in the fields instead of to school; his mother had to work at home more than his father, yet his father was the boss of the house; and religion came between Christians and Muslims.

By the time he was an adult, he could see that many of these social norms were holding back economic development, too.

“They always work and that helped them a lot to get out of poverty, and now we observe that they are really improving,” said Ashenafi Alemu, a researcher in the sociology department of Ethiopia’s University of Gonder.

Through Awra Amba has many local critics, it’s also attracting a growing number of fans, with more Ethiopians intrigued by the project.  New communities inspired by the Awra Amba model have already sprouted up elsewhere in the country. But their growth is spontaneous and erratic, with no input from Nuru or his community.

It is Nuru’s goal to export his idea beyond the village, but Awra Amba doesn’t have the capacity to manage such a scale-up.

“We need to see these villages,” he says, “but I can’t go check them out because we don’t have a car and it is not feasible to travel there by bus.”

The original Awra Amba, meanwhile, is still struggling for acceptance by the conservative villages that surround it.

The various services it now provides are helping. Awra Amba has several grain mills to which local farmers bring their grain to be ground for a small fee. It has constructed a junior high and high school where children from the wider area are educated together.

On top of that, every month, Gonder University’s School of Sociology, in a project aimed at facilitating the transfer of knowledge from Awra Amba to its hostile neighbors, brings together a growing number of people from the village with members of Christian and Muslim communities surrounding it. Around the same table, they talk out their differences.

“Now there is a sort of understanding and improvement regarding the image of the Awra Amba community,” says Alemu, the researcher.