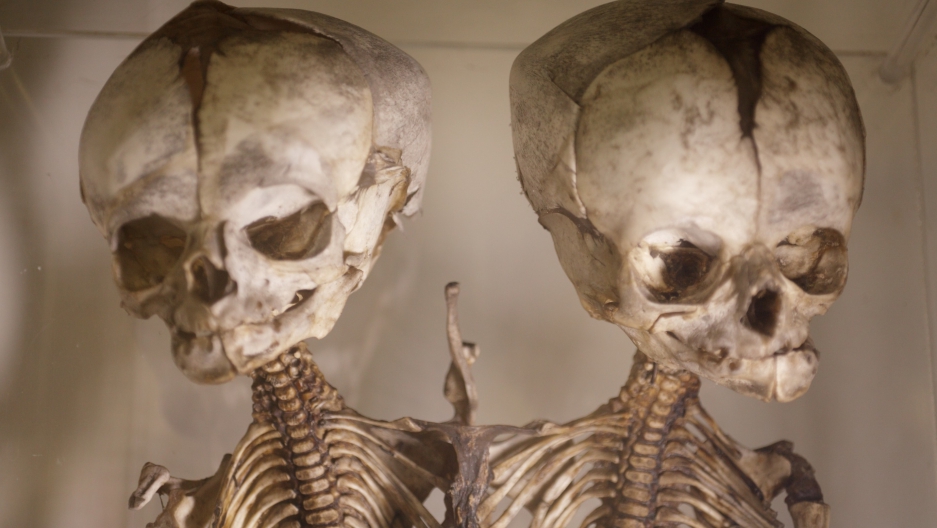 LONDON, UK — Even in death, a body tells the story of its life. Yellow-stained fingers indicate a cigarette habit. Bruises on the lower legs reveal the clumsy stumbling of an alcoholic. Tattoos and teeth can speak volumes about their owners’ fortunes, losses and loves.

As a pathology technician and former mortician, Carla Valentine’s career has been about reconstructing lives and deaths based on such physical evidence left behind.

It was ideal preparation for her current role as assistant technical curator at Barts Pathology Museum in central London.

That’s a benign title for what has to be one of this city’s most unusual jobs: the daily care of 5,000 human organs and tissues housed in glass jars and acrylic cases in an airy Victorian atrium in St. Bartholomew’s Hospital.

The earliest specimens date from the 1750s; the last were accepted in the 1970s. There are gout-afflicted toes, punctured scalps and everything in between.

Since taking over the daily maintenance of the long-neglected collection, Valentine has reorganized its shelves and replaced some of the aging jars, or pots. She’s also made it her mission to reconstruct the stories of the living, breathing humans to whom those organs once belonged.

“It’s not just about the science or the humanities,” says Valentine, a 34-year-old Liverpool native. “It’s about the people behind the pots.”

Some specimens reveal as much about society as pathology. The museum holds the gnarled mass of an 18th-century scrotum afflicted with squamous cell carcinoma, also known as “chimney sweep’s cancer.”

That first recorded industrial-related cancer originated in the scrotum, where carcinogenic soot became trapped in the folds of skin before progressing through the groin and abdomen en route to a painful death.

From a case in the back of the room peers the skull of John Bellingham, whose punishment for assassinating Prime Minister Spencer Perceval in 1812 was to be hanged and dissected for medical purposes.

An opposite shelf holds the jaw of a 14-year-old boy whose head became trapped in a printing press in 1886, a relic of Britain’s dark industrial history.

Some of the specimens provide chilling reminders of modern medicine’s evolution: a brain violated with an ice pick in a frontal lobotomy, a stomach exploded from Victorian-era anesthesia.

Fashion also leaves scars. A tiny mangled foot in a glass jar belonged to a Chinese woman subjected to foot binding. The liver of a 52-year-old woman who died in 1907 bears a prominent dent from a lifetime of tight corsets.

Others simply offer poignant glimpses into lost lives. A pair of hands face outward from a case on the second floor, the wrists delicately encircled with wire. They belonged to a depressed 59-year-old mechanic who took his own life in a bathtub. The fingers still grasp the wire’s end.

Valentine spends most of her days alone with the specimens. She’s grown fond of many of them, particularly those whose story she’s pieced together.

“A lot of them become like people to me,” she says. “It’s much more companionable than being out with live people on the Tube,” she adds of the city’s subway system. Former mortician Carla Valentine was hired to bring the London collection back to life.

People sometimes contact Valentine to confirm their belief that certain specimens belonged to family members. Some ask to visit the organs: an amputated leg, a hand, several different fetuses.

Although she’s tried, she hasn’t yet been able to verify the identities in any such cases.

The only catalogue Valentine found when she arrived was a collection of leather binders dating from the 1970s. They contain little information for each specimen beyond an identification number and sometimes a few dates or notes.

Pathology museums such as the one at St. Barts used to be common features at medical schools. The museum was a busy teaching site for a century, when medical students examined the evidence of disease and procedures gone wrong.

As teaching technologies changed and maintenance funds dried up, the room fell into disrepair.

A 1990s scandal at a hospital where hundreds of organs were removed from dead children without the parents’ consent turned the public against the use of human specimens for teaching. Many British pathology collections were destroyed.

For most of the 2000s, St. Barts’s three-story atrium opened by the future King Edward VII in 1879 remained locked, its specimens “untouched and unloved,” says Paola Domizio, the museum’s curator.

Valentine was hired two years ago in the hope of salvaging the collection and eventually opening it to the public.

She reorganized the neglected and leaking specimens, repotted some herself and peeled away the industrial carpet tiles to reveal a gleaming wooden floor. The museum now occasionally opens for special events, and there’s an ongoing effort to raise funds to open it to the public.

British law governs the public viewing of human remains, and the museum will need a special license to admit visitors to the whole collection. At the moment, all specimens less than 100 years old must be stored on the upper floors, which remain closed to visitors.

Domizio argues that despite its seeming anachronism, the collection remains vitally important to the medical profession.

“Would anyone suggest that a car mechanic qualify without ever seeing or handling an engine part?” she says. Disposing of the collection, as many universities have done, she adds, “would be the ultimate betrayal of the individuals who donated their gifts.”

More from GlobalPost: Tough times for fish and chips

Despite clear signs that the museum isn’t open to the public, people knock constantly asking to visit: former hospital employees who remember the room’s heyday, curious passersby who have read about the collection, Sherlock Holmes fans.

The latter can be particularly aggressive. Author Arthur Conan Doyle set the first meeting between his famous fictional detective and his sidekick Dr. Watson in the laboratory of an unnamed London hospital that many fans believe is based on St. Barts.

Several weeks ago, an American man dressed head-to-toe in a Sherlock Holmes costume barged into Valentine’s office — proof, she says, that dealing with the living can sometimes be odder than handling the dead.

“The dead cause me no problems," she says, "and they never have.”