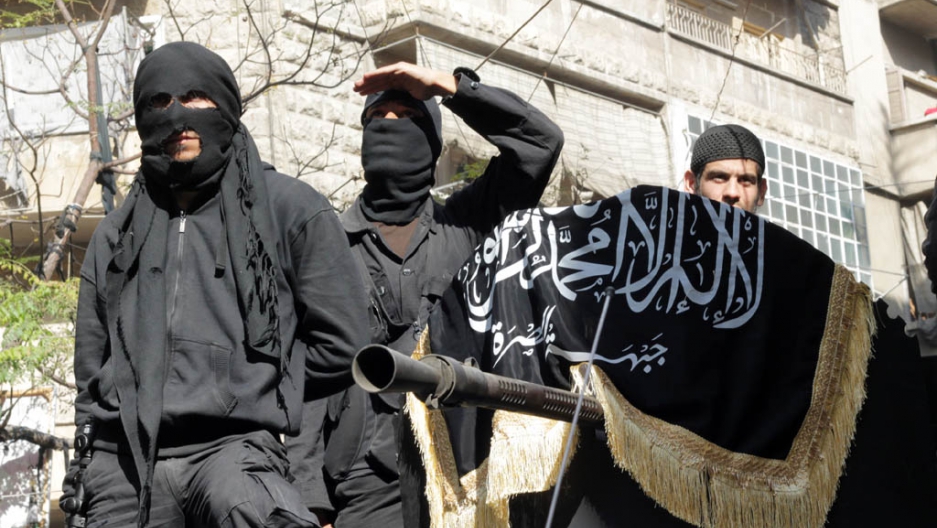 Members of jihadist group Al-Nusra Front take part in a parade calling for the establishment of an Islamic state in Syria, at the Bustan al-Qasr neighbourhood of Aleppo, on October 25, 2013. Syrian state television reported on Oct. 25, 2013 that the Syrian army had killed Nusra's leader, Abu Mohammad al-Golani.
Credit: AFP
Share

The claim could not be independently verified.

Golani is leader of Jabhat al-Nusra, a group branded terrorists by both the United States and Syria’s President Bashar al-Assad.

It has carried out dozens of attacks against government and pro-Assad targets in Syria since the uprising began in 2011.

According to BBC, Golani died in the coastal province of Latakia. Agence France-Presse, however, reported that SANA quickly removed the short alert announcing Golani's death.

If true, Golani's death would have happened at the same time as a Syrian army ambush Friday near Damascus killed between 20 and 40 rebels.

SANA, the government-backed news agency, released grisly photos that purported to show dead "terrorist fighters" strewn along a roadside. It said Nusra members were among the dead.

The Syrian Observatory for Human Rights, a British-based group monitoring the civil war, said it could not confirm SANA's claim. It told the Associated Press that Nusra leaders inside Syria said Golani was alive.

More from GlobalPost: In Syria, this is what terrorism looks like

Jabhat al-Nusra, or The Support Front, is among the most effective forces fighting to unseat Assad from power and losing Golani would be a tremendous victory for Assad forces.

Among its first major victories was a twin car bombing in Aleppo in January 2012. Nusra has since claimed responsibility for 600 attacks.

Al-Amir Gazi al-Haj said his group is effective because it has extremely high standards.

“We only accept the best of the best,” he said from his home in Jabal al-Zawiya, an area in the mountainous north. “We have pure intentions. We fight only for Allah. We do not accept even small deviations [from God’s law], like smoking. We walk a straight line, and you can see the results.”

The Quilliam Foundation, a non-governmental organization that has tracked Jabhat al-Nusra activities, says it could have as many as 7,000 fighters enlisted.

The NGO said Golani is a secretive individual who hides his face whenever in public, including when he meets Nustra colleagues. Quilliam also said twice before Golani has been reported killed twice before: Iraq in 2006 and Syria in 2008.

While American officials accuse Nusra of trying to establish sharia law in Syria on orders from Al Qaeda, al-Haj counters the group is only trying to help "the Syrian people in every way possible."

The way he described his organization, its Robin Hood tactics of distributing fuel, bread and blankets to the needy while controlling food prices to prevent exploitation have won over ailing Syrians.

More from GlobalPost: In Syria, one man's terrorist is another's freedom fighter