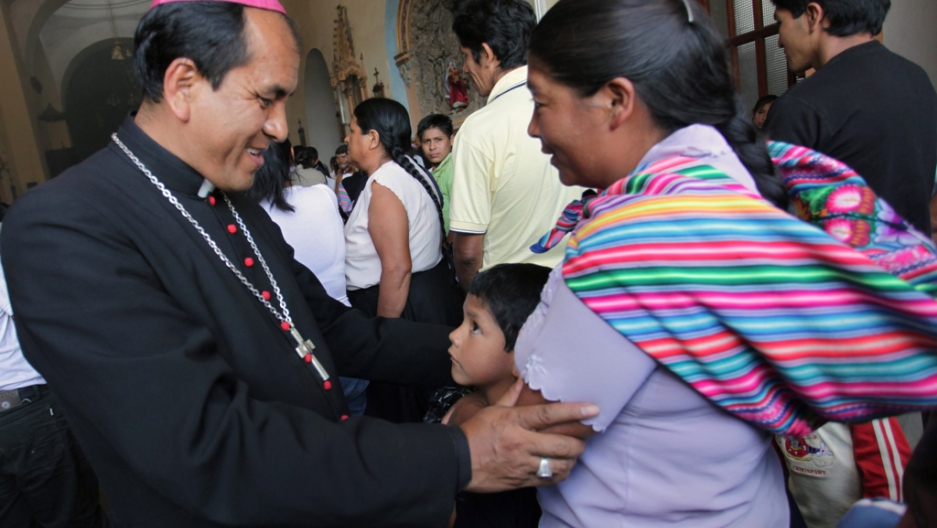 Gabino Miranda, then auxiliary bishop in southeastern Peru. Miranda has been defrocked and on the run after allegations he sexually abused children.
Credit: STR
Share

LIMA, Peru — Pope Francis’ promise of a more humble, tolerant Catholic Church may have earned rave reviews around the world, but in Latin America, a string of child sex scandals has left some wondering what's really changed in the Vatican.

Along with landmark gestures such as dressing simply, publicly kissing followers’ feet and refusing to condemn gays, Francis has also vowed to punish pedophile priests.

Yet seven months into his papacy, the church’s questionable handling of child molestation cases in Argentina, Chile, the Dominican Republic and Peru is calling that commitment into doubt.

Campaigners say it may be no coincidence that the scandals have occurred in Latin America, the world’s most Catholic region, given the influence wielded here by an often conservative clergy.

In the Dominican Republic, the Vatican’s envoy, Josef Wesolowski, was secretly fired in August for allegedly paying underage boys for sex.

In Peru, an auxiliary bishop, Gabino Miranda, has been on the run for more than a month since child sex allegations surfaced. He is alleged to have selected his victims during confession.

He was also secretly sacked by the church. The news only broke by accident, during a media interview with a progressive ex-bishop who mentioned the issue in passing.

In a letter to the Vatican, Miranda denied the allegations but acknowledged being “imprudent.” Lima’s ultraconservative archbishop, Juan Luis Cipriani, even scolded journalists covering the scandal and demanded “mercy” be shown to Miranda.

Meanwhile, in Chile, the archbishop of Santiago, Ricardo Ezzati, this month declined to appear before a congressional committee investigating sexual abuse at Catholic children’s homes, citing the separation of church and state.

That was despite the fact that the homes in question were part-funded by Chile’s government agency for child welfare.

And in Argentina, Father Julio Cesar Grassi is now behind bars after an appeals court in September confirmed his 15-year sentence for sexual assaults on two young boys.

His trial brought a mixed reaction from the Argentine church. One bishop publicly insisted Grassi was innocent. And in response to his conviction, his archdiocese issued a statement highlighting how Grassi had been acquitted on 15 of the 17 charges against him.

For critics, the cases show the church under Francis — who was archbishop of Buenos Aires before becoming Latin America's first pope — still has a long way to go in how it handles pedophile priests.

Jose Andres Murillo, founder of Chilean group Para la Confianza (For Trust), which helps victims, said: “This just demonstrates how there needs to be profound change within the structures of the church.

“It remains full of cardinals and bishops who were named by John Paul II and were sympathetic to his political fight [against communism] but who are pretty reticent when it comes to the rights of children, women or minorities.”

Murillo was also outraged by “scandalous and criminal” moves to declare John Paul II a saint next year, despite the late pope’s 1999 shelving of a child abuse investigation into his friend, the late Mexican priest Marcial Maciel.

Maciel founded the Legionaries of Christ, a powerful worldwide religious order that now admits he carried out widespread child abuse and has expressed its “sorrow and grief” to his victims.

“The problem is global but there are reasons to think it is particularly bad in Latin America,” said Barbara Blaine, of the Chicago-based Survivors Network of those Abused by Priests (SNAP).

“The church plays such an important role in most of Latin America. It can influence people’s lives more than in some other parts of the world.”

Two urgently needed measures, she said, are full church transparency when handling pedophilia cases and for senior clergy found to have covered up child sex abuse to be disciplined.

Yet the church establishment’s response, including since Francis became pontiff, has largely been one of silence.

The Peruvian Episcopal Conference, which gathers together the country’s Catholic bishops, issued a statement offering its “prayers” for Miranda’s victims and stressing the dedication of the Catholic clergy and faithful to the “poorest and most needy.”

But neither the Vatican nor Catholic authorities in Latin America has made any moves to inform the public when a cleric is being investigated.

With 425 million believers, some 39 percent of the global total, Latin America remains easily the world’s most Catholic region, according to the Pew Research Center.

Nevertheless, the church has been hemorrhaging followers here, many to evangelical denominations.

Now just 72 percent of residents in Latin America and the Caribbean describe themselves as Catholic, compared with 90 percent a century ago.

This chart is by Pew's Religion & Public Life Project. Click here for the report.

Francis’ new tone may be an attempt to reverse that trend by making Catholicism more accessible and reaching out to those who felt excluded by its moral admonitions on a range of issues, from reproductive rights to homosexuality.

In a recent interview, he called on Catholics not to be so "obsessed" with imposing doctrines.

Yet the pontiff may be thwarted by resistance from conservative priests.

Although Latin America spawned the “liberation theology” movement of leftist priests who dedicated themselves to helping the poor — and which John Paul II decried as Marxist — it’s also home to some of the most reactionary clergy in the world.

Cipriani, the archbishop of Lima, is the most senior cleric in Opus Dei, the movement that follows a literal — its critics say harsh — interpretation of the Bible.

He is known for his controversial views. He believes Peru’s former dictator Alberto Fujimori, serving a 25-year prison sentence for embezzlement and directing death squads, should be released. And he opposed a pension of less than $100 a month for the penniless elderly.

Jorge Apolaya, a gay activist in Peru, said despite the pope’s recent comments that he could not “judge” homosexuals, there remained great “distrust and suspicion” among the lesbian, gay, bisexual and transgender (LGBT) community.

“You definitely have mixed feelings hearing the pope talk like that,” Apolaya, of the Peruvian LGBT Network, said. “It is a light at the end of the tunnel, but it is still a long way away.”

“The church establishment here in Peru is still very conservative and uses its influence to block LGBT rights and equality. I don’t see gay Catholics returning to the church in significant numbers just yet.”

And unless Francis is able to match words with actions, the same may be true for those who have abandoned the church over its failure to tackle pedophile priests.

GlobalPost Belief: Dressed to excess: the cost of a cardinal's clothes (infographic)