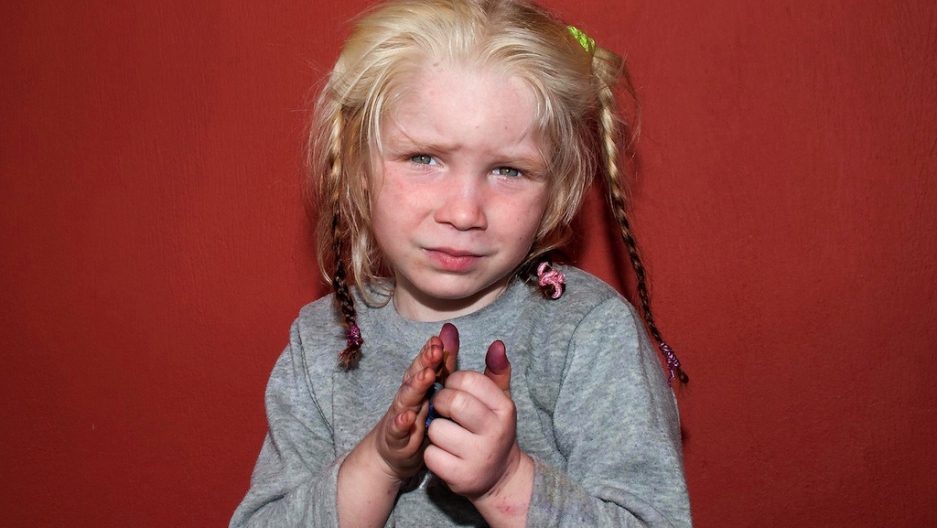 This police handout picture shows the little girl dubbed the 'blonde angel,' who was found living with a Roma couple in central Greece.
Credit: Handout
Share

A Greek court on Monday formally charged a Roma couple with abducting a blonde, pale-skinned girl dubbed the “blonde angel” as police appealed for international help to locate her biological mother.

The girl, known as Maria and believed to be aged about four, was discovered by police during a raid on a Roma camp in the central town of Farsal last Wednesday. DNA tests showed the blonde-haired, green-eyed girl is not related to the couple.

The Roma couple – identified by local media as 40-year-old Eleftheria Dimopoulou and her 39-year-old husband Hristos Salis – appeared in a court in the central city of Larissa on Monday morning.

Two lawyers representing the couple said their clients denied kidnapping the girl. They claimed the biological mother gave the couple the child as a baby in a “not exactly legal” adoption.

"We're talking about a woman who could not raise this child and who gave it to the couple in 2009 through a third party shortly after her birth," Marietta Palavra was quoted by Agence France-Presse as saying.

"There has been no kidnapping, no robbery, no trafficking," added her colleague, Konstantinos Katsavos. "They did not buy the child."

More from GlobalPost: Once again, the Roma have become everyone’s favorite scapegoat

Greece is seeking the assistance of other European countries via Interpol to identify the youngster and locate her biological mother or relatives. Thousands of calls have been made to the charity in Athens caring for the girl since the appeal for assistance went out.

Her discovery has given hope to parents of missing children in Europe.

A spokesman for British couple Kate and Gerry McCann, whose daughter Madeleine was snatched from their holiday apartment in Portugal in 2007, said the “blonde angel” case had given them hope that their little girl would be found alive one day.

For Greek Roma, however, the case spells trouble.

Already viewed as social outcasts, the Roma in Greece fear they will be labeled as child traffickers.

"There is no buying and selling of children here," Christos Lioupis, a man who lives in the Roma community but is not of them, told the Associated Press. "The other Roma are not to blame. These are family people. After this event, the police have been searching everyone. Isn’t this racist?"

As Paul Ames reported from Belgium earlier this year, the Roma have faced hatred, discrimination and eviction from many countries in Europe.