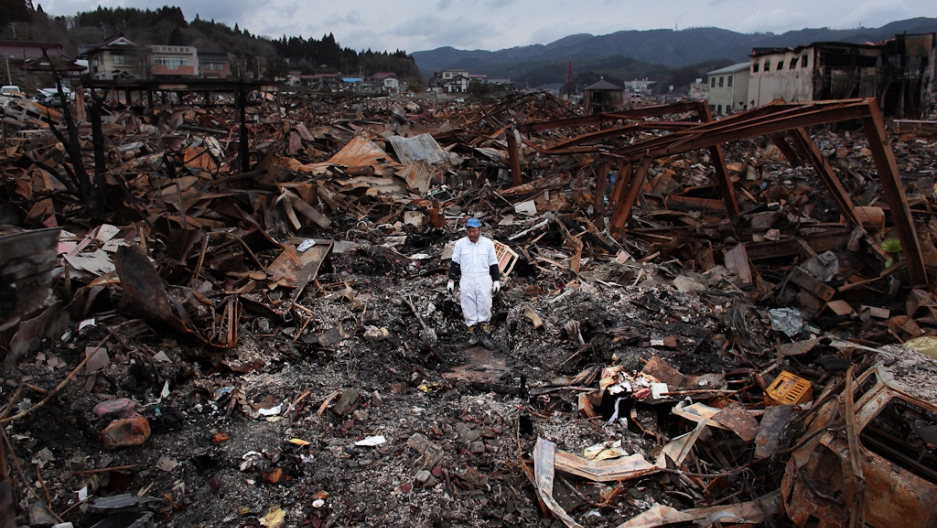 Sigo Hatareyama works to clean out what is left of his house on March 21, 2011 in Kesennuma, Japan. The 9.0 magnitude-strong earthquake struck offshore on March 11 at 2:46 p.m. local time, triggering a tsunami wave of up to ten meters that engulfed large parts of north-eastern Japan, and also damaged the Fukushima nuclear plant, threatening a nuclear catastrophe.
Credit: Chris McGrath
Share

Behind the scenes, Kan now admits that he had been terrified that an unthinkable nuclear catastrophe was unfolding under his command.

In the first five days after the earthquake-tsunami, he says he weighed the possibility of evacuating metropolitan Tokyo — population 50 million — under a plausible worst-case scenario.

Fortunately, that nightmare did not materialize. Yet Kan remains haunted by critical decisions that he made in managing the crisis — miscalculations that endangered citizens and particularly children, he says.

“Looking back,” Kan confesses, “I have some regrets.”

Now a private citizen, he tours the world speaking at events organized by anti-nuclear activists, including one recently held in a dingy basement auditorium in the Massachusetts State House.

Hunched over a podium, wearing a navy blue suit rumpled from travel, Kan — known in Japan for his candidness — describes a torrent of error and poor judgment that for nearly a week threatened to destroy the country.

Kan’s nightmare began at 2:46 p.m. on March 11, 2011, when massive plates 20 miles below the Pacific succumbed to centuries of pent up stress and ground past one another. The force was so immense that it thrust Japan’s main island eastward by eight feet, sank 250 miles of coast by about two feet, and generated a series of tsunami waves as high as ten stories.

For Kan, the quake triggered a tick-tock of nuclear briefings that quickly descended from reassuring to potentially apocalyptic.

“The initial report was that the reactors had safely shutdown,” the former prime minister says.

In an hour, however, he learned that Fukushima Dai-Ichi had lost the electricity needed to control the intense heat in the reactor cores. An hour after that, he was told that some of the reactors had lost cooling capacity — meaning that disaster was all but inevitable.

“I was completely shocked,” says Kan, who immediately grasped the implications, having studied physics at university. “A chill went down my spine.”

As the disaster unfolded, human error and a lack of advance planning, played a key role in worsening it, Kan alleges.

Fukushima Dai-Ichi’s #1 reactor deteriorated first. Although it had a system to cool the core during a power loss, Kan reveals that “for 40 years the plant had not done training on how to use [the system]. The workers started [it], but ended up stopping it,”

The plant manager was unaware of this — until it was too late.

Meanwhile, the government was left with an emergency plan that, at best, could not be implemented.

Because officials had never imagined a disaster of this scale, they had headquartered the response center just three miles from the reactors – too close to the radiation, and in the midst of the disaster zone.

“The offsite center itself had to be evacuated,” Kan says.

And because of damage inflicted by the earthquake and tsunami, key technical personnel were not available to handle the crisis. Officials were further hobbled by local municipalities that had never developed emergency response plans required in Japan.

As a result, officials in Tokyo found themselves improvising.

Bureaucratic chaos complicated matters. Japan had invested in technology to determine which direction a radioactive plume would travel. But Kan confesses, “It wasn’t clear who was in charge of [the system] at the government level, so we ended up not using it. As a result, some people ended up [fleeing] into the direction of the [radiation].”

Because of this shortsightedness, “It was not in our thinking to distribute iodine pills or to tell people, ‘The direction of the plume is in this direction, so avoid that area.’

“The municipalities in the vicinity all had stores of iodine pills,” Kan said. Yet in many places, “iodine pills ended up not being used.” (To prevent thyroid cancer, it is critical for children to take iodine before being exposed to radioactive isotopes.)

In those horrific five days after the quake, as the news from Fukushima kept getting worse, “What went through my mind was, ‘How far is the impact going to go?’” Kan recalls. “I immediately thought about Chernobyl.”

His fear: “We would have a disaster 10 times or even 100 times greater than the Chernobyl. Chernobyl was a severe accident, but it was just one reactor."

“At Fukushima Dai-Ichi” — where the three partial meltdowns occurred — “there were 6 reactors and 7 spent fuel pools.” The latter were filled with radioactive material outside of the containment vessel. One was so badly damaged that it emitted significant quantities of radiation.

While the world watched Fukushima Dai-Ichi, about seven miles away was another nuclear facility, with four reactors and four spent fuel pools. Kan feared that operators could also lose control of these, yet that never occurred.

Still, the scenario worried Kan so much that he quietly ordered experts to study what would happen if the disaster spread. When they delivered the prognosis — evacuation of 250 kilometers (155 miles) around the facilities, including all of greater Tokyo’s 50 million residents, Kan feared for his nation’s future. “Japan would have lost more than a third of its land, and 40 percent of the population would be affected,” he says. Japan “would cease to function as a nation for a long time.”

Before Fukushima, Kan was a proponent of “safe” nuclear power. No more. “Having understood the enormity of the effects,” he says, “I realize that the only way to ensure that an accident like this won’t happen is not to have nuclear power.”