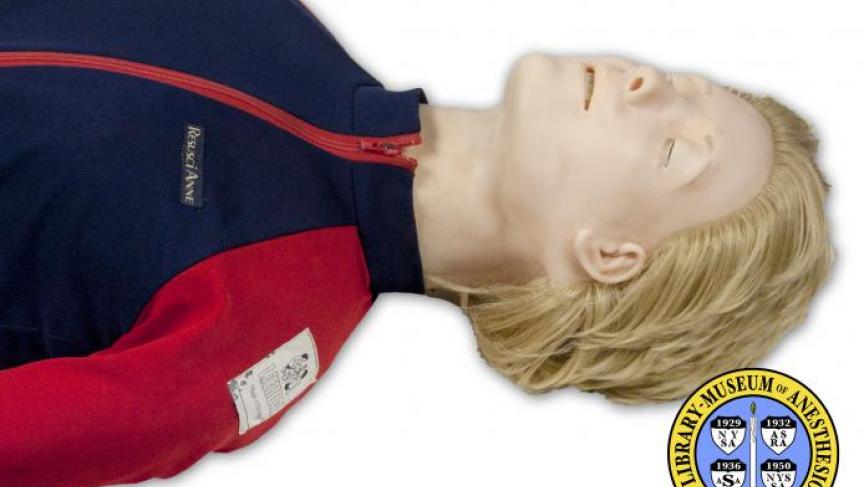 Rescue Annie, also Resusci Anne, is the name given to the CPR training mannequin used to train millions on the life-saving technique.

The story behind the CPR doll Rescue Annie involves a drowned woman, a pathologist and a toy maker.

It's a magical story. It's satisfying.

The BBC's Jeremy Grange tells the full story in a new post for the BBC. The short version goes like this: The body of a drowned woman was pulled from the Seine in Paris in the last 1800s. A pathologist was so smitten with the unknown woman's face that he made a plaster cast of it. That became a death mask that was sold all over the country.

It had Mona Lisa's smile. Poets and writers used the mask as a muse. And year later, a toy maker was asked to create a CPR doll. He needed a face for the body, and he remembered seeing a mask in his grandparents' home. That mask, of course, was the unknown woman of the Seine, or the "Inconnue." The toy maker thought it would be perfect for the CPR doll. And Resusci Anne came into existence.

She's got many names: CPR Annie, Rescue Annie, Resusci Anne. Whatever her name, millions have put their lips on hers.

Grange told the story and thought that was that. But new origin stories keep cropping up about her. Everyone wants to know who she really was and that's causing facts to blend with fictions and fictions being mistaken as fact. Grange ran into one such example near his home in Liverpool, England.

The first came a few weeks after the program was broadcast in 2009. I was visiting Edward Chambre Hardman's photographic studio in Liverpool, the National Trust's perfectly preserved time capsule from the first half of the 20th Century, where anyone who was anyone in Liverpool sat for a portrait with Hardman. Seeing the mask of the Inconnue on the wall of his waiting room, I asked the guide, disingenuously, who the young woman was.

Without hesitating,  she told me the story of two sisters, identical twins, who'd been born in Liverpool more than a century ago. One of them, she said, had embarked on a love affair with a rich suitor and eloped to Paris, never to be seen again. Many years later the other sister had visited Paris on holiday. Walking down a street she was shocked to see the mask of the drowned Inconnue hanging outside the mouleurs' workshops. She had instantly recognized the girl as her long-lost twin, condemned — or blessed — to remain forever young, while her sister grew old.

Grange says that once again, a tapestry of imagination had been woven around the enigma of the Inconnue. And that imagination keeps spreading.

The Oxford-based artist, John Goto, created an entire backstory for the Inconnue years ago. Grange says Goto turned her into a Hungarian actress named Ewa Lazlo, who was murdered by her lover, Louis Argon. The project faded away. Or so they thought.

Just last week, Grange came across a little detail in the London symposium for European Restart a Heart Days. It's a symposium of sorts for CPR:

During the day, a series of speakers share the latest research on improving survival rates after cardiac arrest. But in the evening. entertainment is provided by the ensemble Mulberry Hawk. They're putting on a performance which, according to the blurb, "tells the story of Ewa Lazlo who became the inspiration for the face of Resusci Anne, the first CPR training manikin, and the most kissed girl in the world". So, I thought, Ewa is beginning to take on a life of her own.

Fiction had been treated as fact. Grange says that's OK. He says we'll never know the face behind the Inconnue. But it's better that way.

"It allows our imaginations to run with the idea of the unknown woman of the Seine."