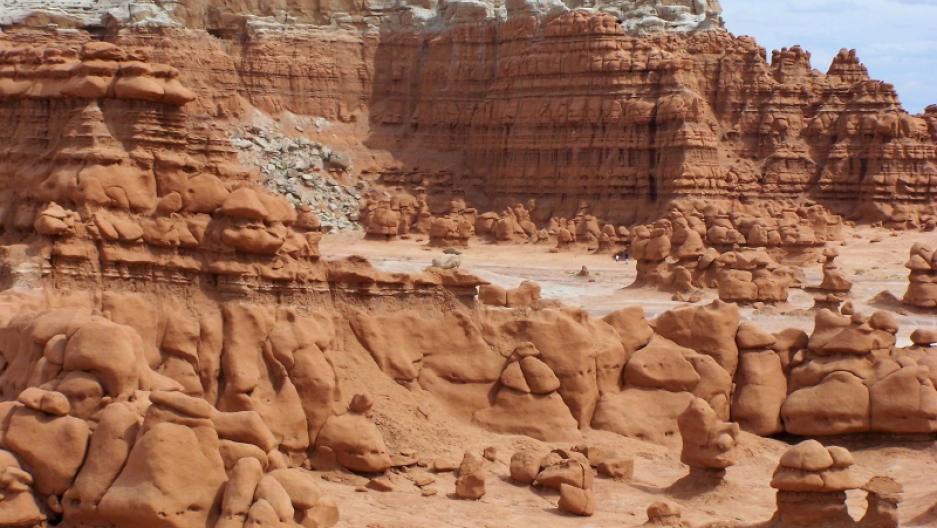 In the video, the men claimed they were destroying the formation so the boulder wouldn't fall on top of a small child, a defense that the state of Utah is unmoved by: the two may face felony charges, according to the Salt Lake Tribune.

"It's all about saving lives here in Goblin Valley," crowed Boy Scout leader Glen Hall in the YouTube video after the boulder was knocked off. And destroying America's natural heritage, apparently.

Perpetrators Glenn Taylor and Hall perhaps could have handled things a little differently, says the Deseret News. "In hindsight, the smart thing for us would have been for us to say, 'Dave, stay here. I'll run and get a ranger,'" Taylor said to the newspaper. "I mean, this rock was sitting in a 3-by-½-inch ledge."

"It is not only wrong, but there will be consequences," said State Parks spokesman Eugene Swalberg to the Salt Lake Tribune. "This is highly, highly inappropriate... This is not what you do at state parks. It’s disturbing and upsetting.

A criminal investigation is underway.

Goblin Valley State Park's unique "hoodoo" rock formations are the result of weathered sandstone that was likely near the shores of an ancient sea.

The surreal landscape the delicately balanced, mushroom-like rocks create is one of the most unique features of Utah's popular desert country — and has a certain pop-culture cachet, as scenes from "GalaxyQuest" were filmed here, representing an alien planet.