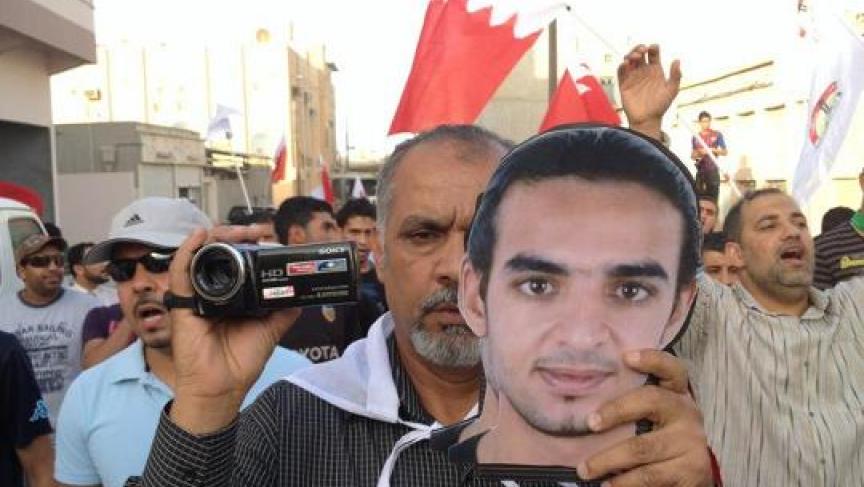 Ahmed's father holds a photo of his son during a protest.

Courtesy of The Development and Aid World News Service (DAWNS)

Ahmed Ismail Hassan al Samadi was 22 years old, living in the small island-nation of Bahrain. His passion for photography and videography drew him to filming the protests that were taking place in Bahrain. They were part of the Arab uprising of 2011.

But Ahmed's passion was also his undoing.

He was gunned down one night, while he was filming a protest that was taking place near his village. He later died of complications from his injury. Journalist Elizabeth Dickinson visited the island on the day Ahmed's funeral was taking place.

"Everyone was talking about Ahmed's death," she recalled.

She says he was on so many tongues, not just because he was the most recent person to die, but because so many could relate to him.

"He was so young, he was so hopeful," she said. "By all accounts he was a quiet, normal boy."

Dickinson met with Ahmed's family and was moved by his story.

"As I was leaving, Ahmed's sister took my hand and she said to me with the voice that I can't forget, 'I want to see you again.' I didn't forget that," said Dickinson.

She decided to go back to Bahrain frequently to follow up with Ahmed's family.

She turned what she witnessed into an e-book: "Who Shot Ahmed: A Mystery Unravels in Bahrain’s Botched Arab Spring."

"Ahmed always knew that his work as a citizen journalist was risky. Bahrain’s security forces have often responded with force to suppress ongoing protests on the islands. Journalists in particular have been targeted, including Ahmed himself, who had also been arrested once in the past and repeatedly threatened by the police. But he was more careful now. He had secured electrical tape around the metal parts of his handheld video camera, so it wouldn’t reflect light and draw any extra attention. He was clandestine even with his family about where he was going and when he would return. No one knew he was gone that night, so they wouldn’t know he was now here, and now the victim rather than the one videotaping the scene. When they reached the graveyard, they set Ahmed’s body down. Still only minutes after he was shot, the green had already disappeared from his stained shorts. The bullets had stopped, so the men weren’t afraid to draw attention to themselves and started to scream for help. They needed to get him inside somewhere. Villagers would be asleep by now. Still, many houses in the neighborhood would have left their doors unlocked, a common practice that began when the protests started. When police streamed into the winding corridors of the old neighborhoods on foot, the demonstrators would flee into the closest houses to take cover from tear gas. But which house Who knew first aid? Who was in charge? No one was in control. No one put pressure on the wound that had now drenched the grey concrete."

As the Bahraini government became more and more concerned about the spreading protests, Dickinson wrote, officials confronted the protesters and tried to stop them — using any possible means.

"As the political crisis has been repainted into a security threat, evidence of the revolution itself has been expunged from Bahrain’s very geography, beginning with the Pearl Roundabout monument. Arguing it evoked bad memories, the government demolished the monument in 2011 and fenced off the area with barbed wire, leaving a vast, awkward gap in the otherwise dense city center. The state discontinued a set of coins that once depicted the monument; they have become a collectors’ item among activists."

Ahmed's family never got an answer about why their son died — but Dickinson says his death actually motivated them to follow in his footsteps.

"In many ways Ahmed was kept alive by members of his family," she said. "His father took up his filming ... some of them are active online, some of them write and do community organizing. Basically they've become stronger members of the opposition because of what happened to their son."