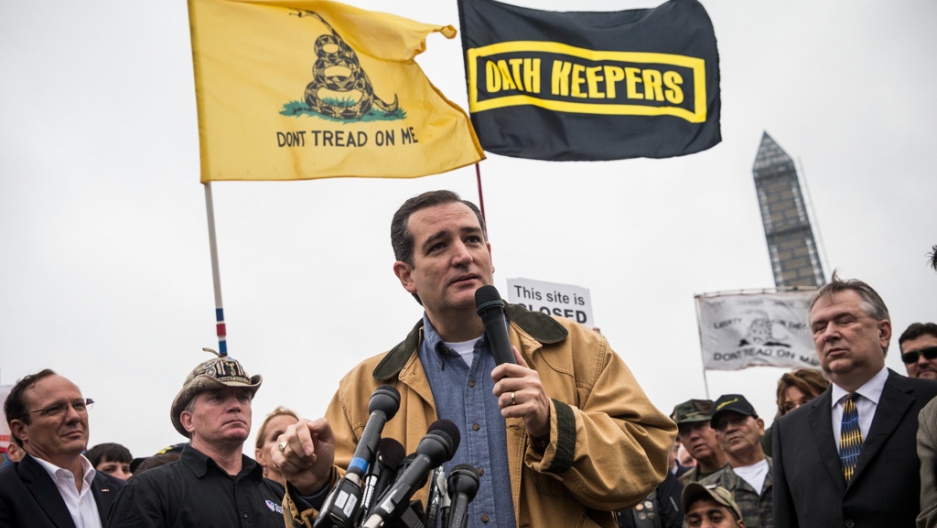 BUZZARDS BAY, Mass. — With default looming and the world watching anxiously, the US Senate has finally come close to a deal to end the government shutdown and raise the debt ceiling, at least temporarily.

No grand bargain, this: As most observers have pointed out, it's merely an exercise in kicking the can down the road, until after the holidays and the all-important Christmas shopping season.

The agreement negotiated by Senate leaders Harry Reid, D-Nev., and Mitch McConnell, R-Ky., would fund the government until Jan. 15 and raise the debt ceiling until Feb. 7. It would make a few token, face-saving adjustments to the Affordable Care Act, and require that Congress conclude budget talks by Dec. 13.

In principle, it could work to avert the economic catastrophe that International Monetary Fund Managing Director Christine Lagarde was so concerned about this weekend, as nearly 300 world economic leaders gathered in Washington for annual meetings of the IMF and the World Bank.

“It’s very, very concerning," Lagarde said on NBC's "Meet the Press" Sunday morning. “The world was doing better. There was recovery in the US, in Europe at last. Japan was turning the corner. The emerging markets were still growing fast and the low-income countries were really showing strong growth.”

But, she added, "If there is that degree of disruption, that lack of certainty, that lack of trust in the US signature, it would mean massive disruption the world over and we would be at risk of tipping yet again into recession."

A deal might also help the Republican Party repair some of the damage to its image sustained during the long and bitter fight over the budget.

According to an ABC News/Washington Post poll released Monday, 74 percent of respondents disapprove of how the Republicans have handled the crisis.

As Sen. John McCain, R-Ariz., put it on CBS’ "Face the Nation" on Sunday, “we’re down to blood relatives and paid staffers.”

Yet as heartening as the seeming detente appears, lawmakers may have turned the corner a bit too late.

Only two days remain before the date on which Treasury Secretary Jack Lew has predicted that the US government will exceed its spending limit.

Passing the deal would be tight under the best of circumstances. Once the Senate OKs the plan, it will have to pass the recalcitrant House, some of whose members have already indicated they will put up a fight.

House leaders worked early Tuesday on a plan that would rival the Senate deal, but by late morning Republican representatives appeared to be backing away from it.

Republican Rep. Tim Huelskamp of Kansas told The New York Times that anyone voting for the Senate deal in the House “would virtually guarantee a primary challenger,” adding that the upper house is now nicknamed “the Senate surrender caucus.”

The Senate is a stately and often unwieldy body, not designed to move quickly. Complicated cloture rules would lock the body into 30 hours of debate following the vote to move the bill. Considering the Senate has not yet introduced the matter, that would make it late Wednesday at the earliest before the deal could be forwarded to the House.

The Senate can vote to do away with the post-cloture debate by unanimous consent — all 100 senators would have to agree.

This would of necessity include Texas Republican Ted Cruz, the maverick first-termer who force-fed his colleagues 21 hours of "Green Eggs and Ham" last month in a doomed bid to block President Barack Obama's signature health care law, known as "Obamacare."

Cruz did accomplish one thing — he became a hero to the Tea Party. He's now the overwhelming favorite of the grassroots conservatives, who awarded him a whopping 42 percent in the Values Voter presidential straw poll last weekend.

This may give Cruz the illusion that he has nothing to lose, and a White House to gain, should he stand firm against the Obama administration and all the predations he insists it is imposing on the American public.

“You look at our Constitution, you look at our Bill of Rights, this is an administration that seems bound and determined to violate every single one of our Bill or Rights,” he told the Values Voter crowd. "I expect them to start quartering soldiers in people’s homes soon,” the Texas Republican said.

On Sunday, Cruz appeared, along with former Alaska Gov. Sarah Palin, at a rally called “the Million Vets March” near the World War II Memorial on Washington, DC's National Mall.

There were significantly fewer than a million ralliers, but what they lacked in numbers they made up for in intensity. A Confederate flag had pride of place, and one speaker, conservative activist Larry Klayman, called on Obama “to put the Quran down, to get up off his knees, and to figuratively come up with his hands out."

Cruz himself is being cagey about his intentions.

“We need to see what the details are,” the Texas senator said when asked whether he would try to delay the deal.

If Cruz or one of his like-minded colleagues does manage to delay an agreement past the default deadline, no one's quite certain what would happen.

A determined contingent of “default deniers” has posited that it might actually be a good thing: Sen. Rand Paul, R-Ky., told CNN that all the doom and gloom talk is just scare tactics.

“Not raising the debt ceiling means you have to balance your budget,” he said. “It doesn't mean you have to default.”

Experts such as Nobel Prize-winning economist Paul Krugman disagree, and have gone hoarse trying to convince the skeptics that a default, even a small and temporary one, would be a serious blow to US credibility.

Treasury’s Lew has also tried to explain that the kind of prioritizing that would allow the US to pay interest first is simply not possible and would cause “chaos.”

The Oct. 17 date is somewhat artificial — the Congressional Budget Office puts the date on which the Treasury exhausts its cash a week to 10 days later.

So default could still be averted, even if Cruz does his worst and the House dithers a bit before Speaker John Boehner, a Republican from Ohio, finally bows to the inevitable and puts the bill to a floor vote.

But the monthlong game of chicken has frayed nerves, exploded tempers and made the United States a bit of a laughingstock in the world.

It has also prompted China to advise the global economy to “de-Americanize.”

If all goes well — a long shot, to be sure — we may be out of the woods for now, at least until early February.

But hold on, Groundhog Day is coming.