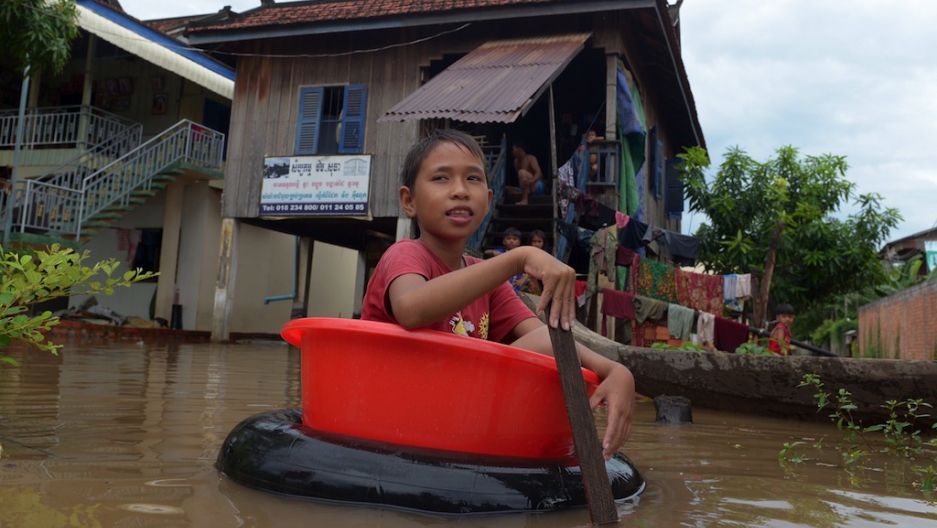 A Cambodian boy rows through flood waters in front of his house on the outskirts of Phnom Penh on September 27, 2013.
Credit: Tang Chhin Sothy
Share

BANGKOK, Thailand — Flooding is a perennial pain in Cambodia, the low-lying, deeply impoverished nation squeezed between Thailand and Vietnam. About this time each year, rivers swell, lakes expand and villages sink beneath soupy brown waters.

But this year’s flooding woes are proving particularly miserable.

More than 100 are dead, roughly 850 square miles flooded and more than 60,000 evacuated from their homes, according to situation reports prepared by United Nations agencies and non-governmental organizations.

To varying degrees, two-thirds of Cambodia’s provinces have been hit by a flooding crisis. Some villages have damaged crops, others are so submerged that boats can skim past their rooftops.

As with every flooding disaster — including an epic 2011 flood crisis considered one of the worst in recent memory — the woes are compounded by poverty in Cambodia, where one-third of the population survives on $1 per day.

Severely flooded zones now appear threatened by a rash of diseases, namely dengue fever (borne by mosquitoes, which lay eggs in fetid water), as well as respiratory illness (such as the flu) and plain-old diarrhea.

Treatable diseases easily beaten back by healthy people are more likely to kill the young, the old and anyone whose body is weakened by a poor diet. According to the UN World Food Program, Cambodia’s malnutrition rate is “stubbornly high” with nearly 40 percent of children underfed. The United Nations news service, IRIN, cites an “increase in reports of respiratory and diarrheal disease” with no hard figures yet available.

In Southeast Asia, flooding crises are hardly unique to Cambodia. Neighboring Thailand too is struggling with a monsoon deluge that has killed dozens. But in modernized Thailand, floods bring out military relief squads and quick-response teams with sandbags by the truckload.

In Cambodia, cursed with a dysfunctional government, villagers rely more heavily on foreign-funded aid workers with the United Nations or religious organizations such as World Vision. One of the largest humanitarian operations, the Cambodian Red Cross, has been criticized for neglecting flood-ravaged areas during a recent October holiday honoring ancestors, according to the Cambodia Daily newspaper.

Floods are inevitable in a country where four out of five working Cambodians rely on natural flood cycles as part of an ecosystem benefiting fields and fisheries, according to a Mekong River Commission report.

But emergencies of this magnitude tend to wreak lasting havoc in the lives of families that survive in the margins. Families already struggling against grinding poverty are ground down even further. Cattle drown, rice fields rot and many make up the financial losses by borrowing from provincial loan sharks.

Worse yet, children can absorb diseases parents can’t afford to treat. And when the waters recede, kids often return to schoolhouses filled with soggy books and damaged by the high waters. According to the latest situation report issued by the government and varied international agencies, 850 schools have been affected since rains starting causing damage in late September.

The outcome: each flood season, families on the brink can be pushed over the edge if the monsoons are particularly heavy. So far, standing waters in the poor nation’s worst-hit provinces have yet to start receding.