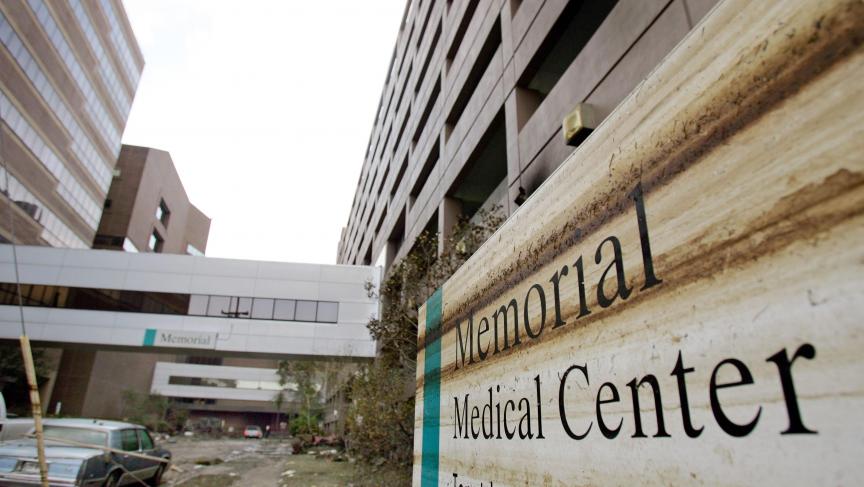 The Memorial Medical Center of New Orleans was badly damaged on Sept. 13, 2005, after Hurricane Katrina tore into the city.

In a natural disaster, little is more important than medical care. But when a massive earthquake or storm injures large numbers of people, health systems are often crippled, too.

Sheri Fink, a doctor and journalist, has a new book out, called, "Five Days at Memorial: Life and Death in a Storm-Ravaged Hospital." It examines the haunting story of doctors at New Orleans' Memorial Medical Center allegedly euthanizing their patients in the aftermath of Hurricane Katrina in 2005.

It's honest. It's raw. It's unbelievable. The hospital was not prepared for such a disaster and forensic consultants later concluded 23 corpses showed elevated levels of morphine and other drugs.

Fink covered the medical challenges in Haiti for The World after the earthquake in 2010 and she sees parallels between the two disasters.

"In Haiti it was that there was so many injured people and there were very few medical facilities that could treat them," she says.

One of her stories from Haiti looked at an American field hospital that was running out of oxygen to treat its patients. A doctor had to decide how the resource should be used. It resulted in at least one tragic decision. A woman required oxygen indefinitely. He decided it couldn't be done. So he took her off oxygen.

"He called it, essentially, a death sentence," Fink says.

Reporting on hospitals reponding to crisis situations, where ethics fall into gray areas, is difficult stuff. Fink says an experience she had in medical school influenced her interest in this area.

In her last year of medical school she traveled to Bosnia for a conference about medicine, war, and peace. She says it amazed her — but not perhaps in the way you might think.

"The things that they were experiencing in a crisis were the kinds of ethical dilemas that we face every day in American medicine," she says. "I feel like situations of disaster or war or conflict — sometimes these emergency situations can crystalize issues, can help us see issues that are really with us all the time."