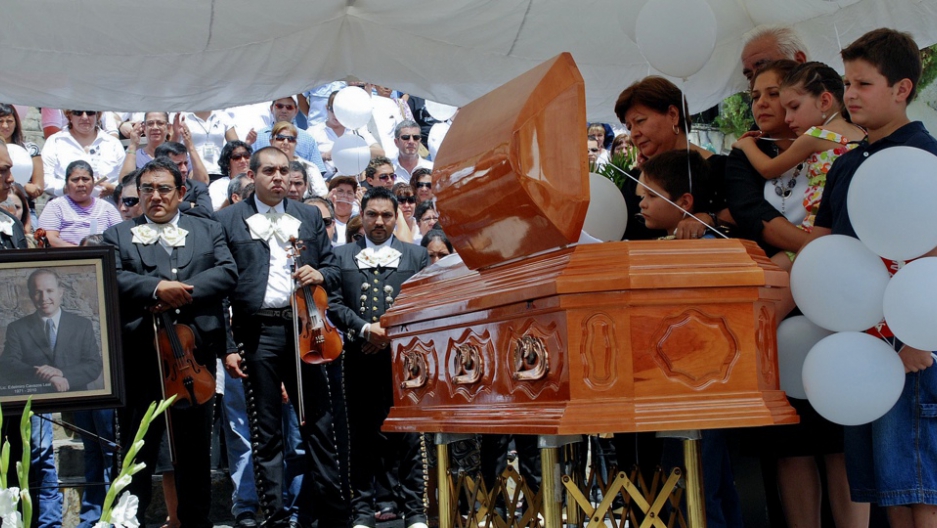 MEXICO CITY, Mexico — Ygnacio Lopez is hunching on a blanketed cot in a tent outside the senate, starving himself on behalf of his country's besieged mayors.

The 61-year-old mayor of a lakeside township in the highlands northwest of Mexico City, Lopez is pressing for more government funds and greater protection from gangland extortion for the nation’s 2,400 mayors.

Mexico, Latin America’s second-largest economy, is one of the region’s stingiest countries when it comes to the share of public revenue that goes to mayors’ coffers.

Now, the shortchanged municipal treasuries are being sucked drier by gangsters’ demands for public works contracts and a cut of everything spent by city halls.

"We have very little money to begin with," Lopez tells GlobalPost, his soft voice barely heard above the traffic snarled in one of the capital's busier downtown intersections. "With this extra charge over us we can't manage our situation."

Poorly paid, armed, trained and vetted, Mexico's local police forces prove easy for the gangs to bend or break. Left to fend for themselves, even honest mayors and city councils are forced to cede contracts to the gangs’ preferred companies. Many pay extortion to the gangsters.

"Forty percent of the country's municipalities are threatened by organized crime," Leticia Quezada, president of the National Confederation of Municipalities, tells the Mexico City newspaper Reforma.

Ignoring the gangs’ demands also often means death. More than 45 mayors have been murdered and 30 have gone missing in the past six years, according to Quezada's confederation, an umbrella group that represents most of the country's local governments.

"We want to have a peaceful town. Everything is in your hands," an off-camera voice tells a visibly frightened Inacio de Jesus Valladares, mayor of the rural Guerrero state town of Teloloapan, in a video posted to YouTube a year ago, presumably by his abductors. "We want you to commit to us."

In the video, Valladares' captors, reportedly members of the vicious La Familia gang, press him to name their pick as his town’s new security chief. Looking like a beaten puppy, the mayor readily agrees, saying he prefers a police force that’s "neutral" in the local underworld rivalries.

Gangsters had killed more than a dozen Teloloapan police officers in the months leading up to Valladares' election in July 2012. Last spring, after security forces slayed a local gang leader, suspected gang members ambushed and killed a handful of state policemen near the town.

Such control of local officials has helped spur a self-defense movement sweeping crime-besieged parts of both Michoacan and Guerrero states this year. Volunteer militias have driven elected mayors out of a handful of Michoacan towns, accusing them of connivance with the gangs. Regular police forces have been replaced by vigilante gunmen, answerable to activist juntas that critics say often respond to other gangland pressures.

The quirky and violent Knights Templar organization tightly controls the swath of Mexico that includes Lopez's town, Santa Ana Maya, on the shore of Lake Cuitzeo. The Templar's hegemony has meant relative peace in the area, since there’s little need to battle rivals there.

Though peaceful, the control leads to widespread, if largely unmentioned, extortion. Anyone out of step with the gunmen faces an uncertain future.

Gunmen on Wednesday killed the police chief of the town of Puruandiro, a few dozen miles from Santa Ana Maya, reportedly pumping 50 bullets into him. Lesson given, lesson learned.

"No one can guarantee their own life. You have to take precautions," Lopez says, shrugging.

"We are on the knife's edge. I can be talking with you here today and in a few weeks you could be reading my death notice."