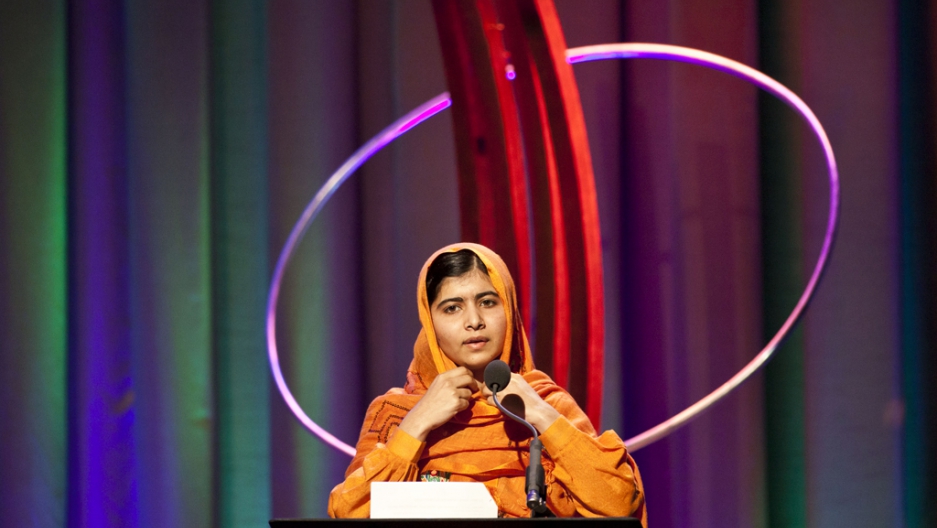 The 16-year-old activist told Stewart that if she were confronted by the militant that shot her in the head a year ago — as much as she would like to strike back — ultimately the best response would be to educate him and his children.

Addressing her attacker, Malala told Stewart, “I would tell him how important education is and that I would even want education for your children as well."

Stewart was momentarily dumbstruck as the audience went wild, and the appearance immediately went viral, reaching 700,000 hits in less than a day, according to The Daily Telegraph.

Malala was shot by a member of Pakistan's Tehreek-e-Taliban as she was campaigning for girls' education. The Pakistani Taliban destroyed hundreds of girls' schools in the Swat Valley (where Malala is from) between 2007 and 2009.

Shahidullah Shahid, a spokesman for the group, told Agence-France Press on Thursday that Malala "has done nothing" to deserve the EU's award and repeated threats against her life.

"The enemies of Islam are awarding her because she has left Islam and has became secular," he said, according to AFP.

In fact, the award was in recognition of Malala's freedom of thought and "her fight to promote education for girls in the face of Taliban violence," according to a Thursday statement from the European Parliament.

Parliament President Martin Schulz hailed Malala as a "brave advocate for education" who "reminds us of our duty toward children and especially girls," said CNN.

"Today, we decided to let the world know that our hope for a better future stands in young people like Malala Yousafzai," said Joseph Daul of the European People's Party.

The $65,000 Sakharov Prize for freedom of speech is an annual award bestowed by the European Parliament in memory of Soviet dissident and physicist Andrei Sakharov.

Watch Malala's appearance on The Daily Show below (and check out her social media following):

[View the story "Twitter turns to Malala Yousafzai" on Storify]