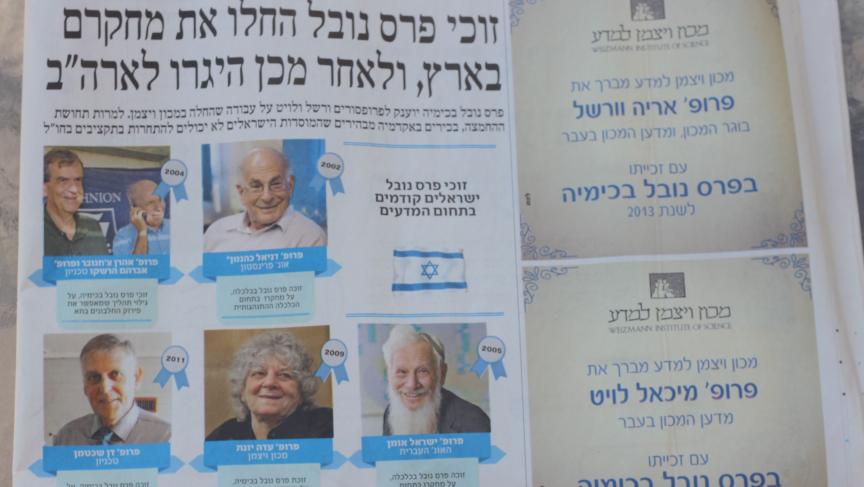 Israeli Prime Minister Benjamin Netanyahu made an awkward telephone call Wednesday to an Israeli-American scientist and co-laureate of this year’s Nobel Prize in Chemistry.

“We see you as one of us,” Netanyahu told professor Arieh Warshel in a videotaped call (in Hebrew) posted to the Prime  Minister’s YouTube channel.

The awkward part: the professor began his Nobel-winning research in his native Israel, but later left for the US because he couldn’t get tenure in Israel, his brother reportedly said.

Warshel is sharing the Nobel with another Israeli citizen, Michael Levitt, who is now at Stanford, and Austrian-born US Jewish chemist Martin Karplus.

Israeli pride? Not this time, said Israeli columnist Or Kashti in the left-leaning Israeli daily Haaretz. He wrote that Netanyahu and Israel’s Minister of Science, who praised the Israeli scientists’ victory  “could be left to wallow in their little puddle of parochial smugness had their words not thrown into stark relief one blatant fact – the deterioration of Israeli academia.”

According to a study released this week by a leading Israeli social policy research center, Israel’s brain drain is the highest in the West. Israeli researchers are leaving Israel predominantly for the US, the study found, as government funding for higher education has dropped and senior faculty members at Israeli universities are becoming sparse.

Their move to the US is completely understandable, a professor at Hebrew University of Jerusalem told Haaretz: there are 12 researchers in Israel who deal in their field, compared to some 500 researchers in the US.

“The United States was able to provide the computational possibilities much more quickly with computers that did not exist elsewhere in the world,” Prof. Amiram Goldblum said.

The country prides itself on its disproportionate amount of Nobel Prize winners compared to its tiny population of nearly 8 million people, not to mention that about 22 percent of Nobel laureates have been Jews.

That’s why it stings many Israelis that these Nobel laureates ditched the Jewish state.

“(Almost) Our Nobel” was the main headline on Monday's Israel Hayom newspaper. The Israeli research institutes where the two Israeli laureates were once affiliated took out only small congratulations ads in Haaretz – buried on page four.