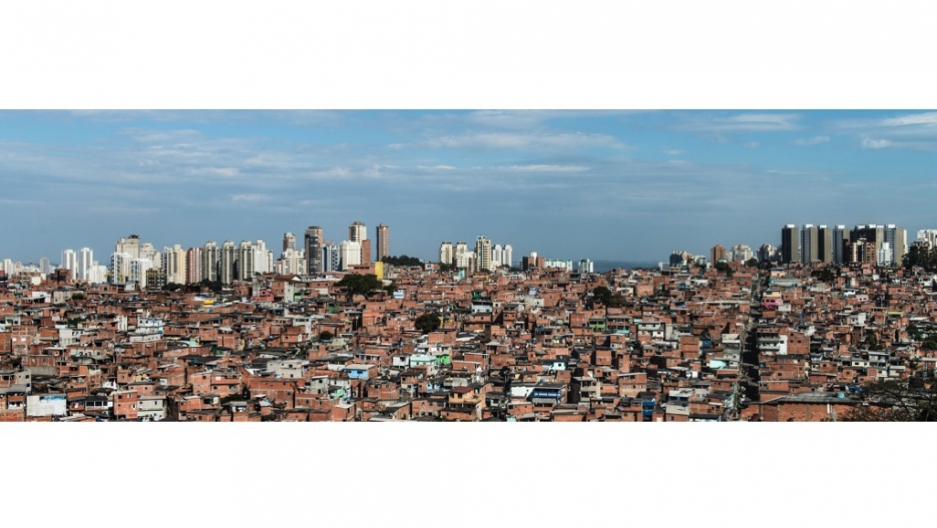 Editor's note: This article is part of an in-depth series on how Brazil's harsh household economics spurred a mass protest movement and still bubble under the surface of Latin America's biggest nation.

SAO PAULO, Brazil — The cows were dying of hunger.

Months of drought in northeastern Brazil left 34-year-old Natanael Melo and his 22-year-old wife, Vaniele Costa, with no option. They had borrowed money to buy food for their small herd, but that cash withered away like the crops.

It was time to leave.

That was six months ago. Today, the young couple’s vista is very different from the brittle cattle country they still consider home. Along with their 5-year-old, Nicolas, they live in a tiny apartment overlooking a trash-strewn alley in a large favela, or slum, in Sao Paulo.

“I just want to go home,” Melo said, his eyes bloodshot from the big-city pollution. “I just want things to be like they used to be.”

Five-year-old Nicolas Melo peers out of the one window of his family’s tiny apartment in the Paraisopolis favela in Sao Paulo. Jaqueline Gomes/GlobalPost

Going home isn’t an option, at least not in the near future.

Drawn by the so-called Brazilian economic miracle of the 2000s, millions of families like this moved to the country's teeming cities, seeking an escape from harsh lives as subsistence farmers.

The booming economy, combined with a panoply of new laws and government programs aimed at boosting the working poor, succeeded in swelling the ranks of Brazil’s vaguely defined “middle class” until it included almost half the population.

But in recent years, the miracle has faded, leaving the lower echelons of that middle class, like Melo and Costa, facing a new form of economic despair often as harsh as the lives they left behind.

More from GlobalPost: The shame of a "dirty name" in credit-crazy Brazil

Urban Brazil has become an extraordinarily expensive place to live. A recent study found Sao Paulo, Brazil’s biggest city and financial hub, to be the most expensive city in the Americas, far outstripping glitzier metropolises like New York and Los Angeles.

Earlier this year, this widespread desperation erupted in massive protests across Brazil. More than a million people spilled out onto the streets in a display of solidarity and political activism virtually unheard of in this country.

The protests were a turning point for President Dilma Rousseff, whose once strong public approval shrank. She placated the crowds with promises of reform and called on local governments to cancel proposed increases in public transportation fees.

But while the protest movement has faded, Melo and Costa, who sat out this June’s protests in their apartment, warned that the problems that sparked the demonstrations remain as significant as ever.

Prices continue to rise for everything from beans to gas stoves, Costa said.

Meanwhile, the lines at the local clinic are just as long, and she dreads the day she has to send Nicolas to the dysfunctional local school.

“It just keeps getting more expensive,” she said. “And we never even wanted to come here.”

While price hikes haven't hit the hyperinflation seen in the 1980s and '90s, the cost of living here continues to march upward. Inflation has hovered around an annual 6 percent for the last five years.

By contrast, inflation in the United States typically stayed below 2 percent over the same period.

This constant uptick in prices is likely to stick around for at least the next two years, predicts Brazil’s Central Bank, whose director recently told Reuters the bank has “a lot of work” left to battle inflation. This week the bank hiked interest rates for the fifth straight time — to 9.5 percent from 9.0 percent — in an effort to cool inflation.

In an interview at their apartment, Melo and Costa opened up about their finances.

For their first six months in the favela, the family’s monthly income was 900 reais — about $405 at the current exchange rate.

Then, in August, Costa got a cleaning job at the famous Morumbi stadium, home to Sao Paulo soccer club.

The gig pays 700 reais a month, about $315, and she gets additional monthly stipends for food and transportation, adding about another $100.

Instead of spending the transport stipend on the bus, she leaves home at 5 a.m. to make a 40-minute walk to work. She’d rather use the money for food.

All told, Costa now brings in about $420 a month extra, bringing the total household income to a little more than $800 a month.

Until she found work, 700 reais of the family’s 900-reais monthly income went straight to the supermarket to pay for rice, beans, cooking oil, some vegetables and meat, Costa said. No frills, just sustenance to keep the family going.

That left about $84 a month for everything else.

Melo and Costa embody the challenges faced by Brazil’s low wages. A recent report by the Organization for Economic Cooperation and Development, or OECD, ranked Brazil 36th out of the 36 countries it studied in terms of income.

The family’s combined salary has just doubled, bringing it closer to Brazil’s average household income, after taxes, of $10,225.

That’s still far below the average family income in the countries the OECD studied, of $23,047 a year.

With the extra money coming in, Costa said she’s feeling something she hasn’t felt in a while: a shred of relief.

But she knows that won’t last long.

She recounted a long list of things she needs to buy once she gets paid: new shoes for Nicolas; basic furniture for the apartment; clothes. Everything that wasn’t purchased over the last six months now has to be caught up.

All the goods Melo and Costa need will likely cost them far more than a New Yorker, an Angelino or a Chicagoan pays for the same items in their local stores.

Thanks to a weakened currency, nagging inflation, high tariffs on imports and layers of local, state and federal taxes, Brazilians typically pay far more for goods like home appliances and clothing than their counterparts in US cities.

An informal poll by GlobalPost found that three items — a large cheese pizza at Pizza Hut, a pair of Levi’s 501 jeans and a 16GB iPhone 5 — were all far more expensive in Sao Paulo than in Boston.

Sao Paulo residents pay about 50 percent more for their Levi’s, more than double for a pizza and more than $400 more for a basic iPhone 5 than consumers in Boston, our poll found.

That price gap cuts nearly across the board, from cars to baby diapers.

The shanties of Paraisopolis are surrounded by the upscale neighborhood of Morumbi.

As the sun begins to set, the towering luxury “condominios” that rim the hillside to the west of the favela begin to glow, sunlight streaming between them to throw gold bars across the slum.

Leaning in the doorway of his apartment, lost in thought, Melo contemplates a question: Does he resent living near such vast wealth, surrounded by malls and restaurants whose fruits he can’t enjoy?

Melo doesn’t want to live in a fancy apartment. He just wants to make enough money to leave Sao Paulo — to set up back at home again.

The main obstacle to meeting this modest goal, he said, is the triple bondage of inflation, taxation and debt.

Until the government does something to ease those burdens, he said, he sees little hope of escaping the favela.