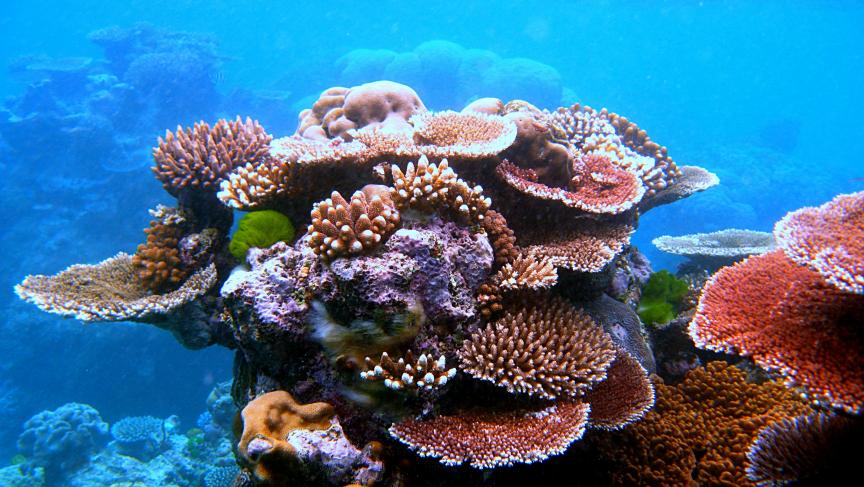 Australia's Great Barrier Reef could be at risk from climate change.

The human impact on the climate is a global problem, yet the global solution will require many local actions.

Consider the Pacific region. China is the largest emitter of carbon dioxide and largest consumer of coal — much of which is shipped in from Australia.

Both countries are grappling with how to deal with those emissions, in spite of, or perhaps because of, their lucrative trading relationship. James West, an Australian producer for Climate Desk, has been conducting an investigation into the future of energy in China.

"We’ve decided to come here and really profile what’s next for this giant country that is so voracious when it comes to energy consumption," West said. "It’s been really eye opening."

So far, he says, the country remains completely addicted to coal. Some 70 percent of the nation's power comes from coal. On a recent trip from Beijing to Xian, West passed through the nation's coal belt. Where one plant stopped, he said, another began.

"I can’t explain to you how intense it was to see such an amazing level of unabated development through this area," he said. "It’s hard to have confidence that the country can actually get off its addiction to coal but certainly we know that it’s trying."

But that coal comes from somewhere. And that somewhere is Australia, in the case of China. All of those coal exports helped fuel the Australian economy even through the global recession.

Australia, however, is also one of the earliest adopters of a carbon tax — a government levy on the production of carbon dioxide emissions. But since it was imposed two years ago, it's faced constant opposition.

There have even been protests across the country, West said.

"It’s become a personality test really between Julia Gillard, a former prime minister of Australia who introduced the tax, and a very strident opposition who used, much like the Republicans do in the United States, climate change as a kind of ideological avatar for all sorts of other things about big government and conservative ideology," he said.

The effectiveness of the carbon tax remains up for debate, and perhaps too soon to say, but West says some preliminary analysis said the carbon tax was trending toward reducing emissions.

But, at the same time, prices of power were going up — something critics, rightly or wrongly, blamed on the carbon tax. Tony Abbott, Australia's new prime minister, vowed to repeal the tax if he was elected. He was.

"He’s now in the process of repealing this carbon tax. But the interesting thing here is, he has the same carbon reduction target as the government, but he’s doing it in a completely different way," West said.

Whether he can do that, though, remains to be seen. West says he's talked to experts who say it'll definitely be a challenge.

Rather than a tax, the government will spend taxpayer money to reduce emissions directly — buying carbon, planting trees or even improving farming.

"If this system reduces carbon, then so be it," West said. "But every model that we’ve looked at doesn’t say that it points in that direction."

The consequences of climate change for Australia are immense. Many of the country's tourist attractions and natural resources, like the Great Barrier Reef, are subject to fluctuations in the climate.

"It’s important to look at Australia as a kind of canary in a coal mine if you will," West said. "Here is a country with a small population that plays politics large on the world stage, and if this happened in Australia, no wonder U.S. politicians are looking and going, 'Oh my God. Is that going to happen to me if I speak up about climate change here?'"