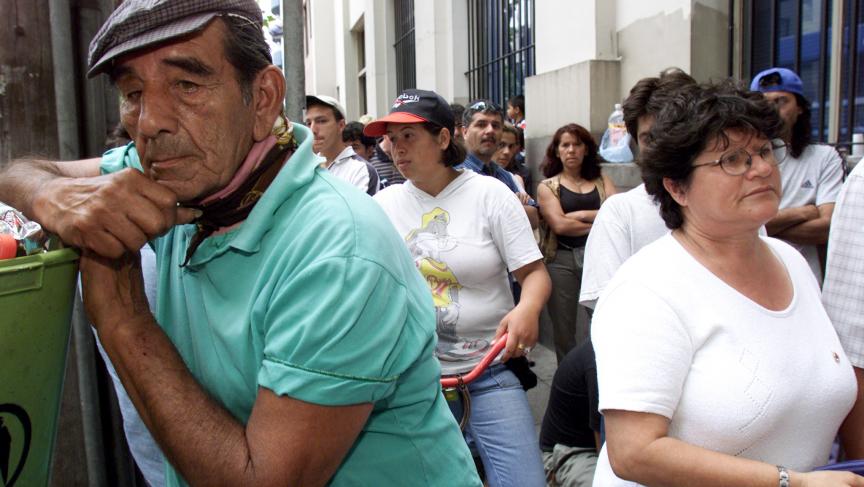 Unemployed Argentines and workers line up outside the Banco de la Nacion in Buenos Aires trying to collect their money, December 21, 2001. Argentina would default on its sovereign debt days later.

Most everybody agrees: The US doesn’t want to end up like Argentina.

In 2001, Argentina went through the biggest sovereign debt default in history, refusing to pay creditors some $100 billion.

Argentina’s default was the final straw of a long economic crisis. The country already had rampant inflation and people were losing faith in the Argentine currency. Then came the default and Argentina’s entire financial system fell apart.

“All the bank accounts were frozen,” said Alberto Ferreres, a surgeon in Buenos Aires, recalling when he tried to pay a modest sum to Purdue University in Indiana to reserve his son’s spot in college. “I was not able, not even to withdraw the money, but to wire transfer the money. So a good friend of mine sent the money to the US in my name on my behalf.”

Eventually Ferreres was able to withdraw his savings, which were in US dollars. He, and other Argentines, were paid back in Argentine pesos that were severely devalued.

That was the pain within Argentina, and the rest of the world soon doled out further punishment.

“Argentina has basically been shut out of international capital markets for the last 11 years,” said economist Desmond Lachman with the American Enterprise Institute in Washington, DC.

In other words, defaulting on your debt is a very bad idea.

Still, Lachman said, while he doesn’t want to minimize the impact of a default here in the US, it wouldn’t be like what happened in Argentina.

A US debt default would be a reputational hit and likely raise the interest rate for borrowing going forward. But people would still loan the US money.

The two cases are also different because when Argentina defaulted, most of the world didn’t really care all that much. Yes, foreign holders of Argentine bonds were angry, and still are today. But the Argentine default didn’t send shockwaves across the globe.

If the US were to default, Lachman said, “we know that this could be hugely disruptive for money markets, for bond markets, for stock markets. This would be a global event.”

There’s one more big difference between the US and Argentina.

“My friends in America say that they are undergoing a crisis; they don’t have the slightest clue of what a crisis is,” Ferreres said.

Ferreres doesn't think that US politicians would actually default on America’s debt.  He said, while referencing corrupt Argentine politicians, “that’s a move for under-developed countries like Argentina.”