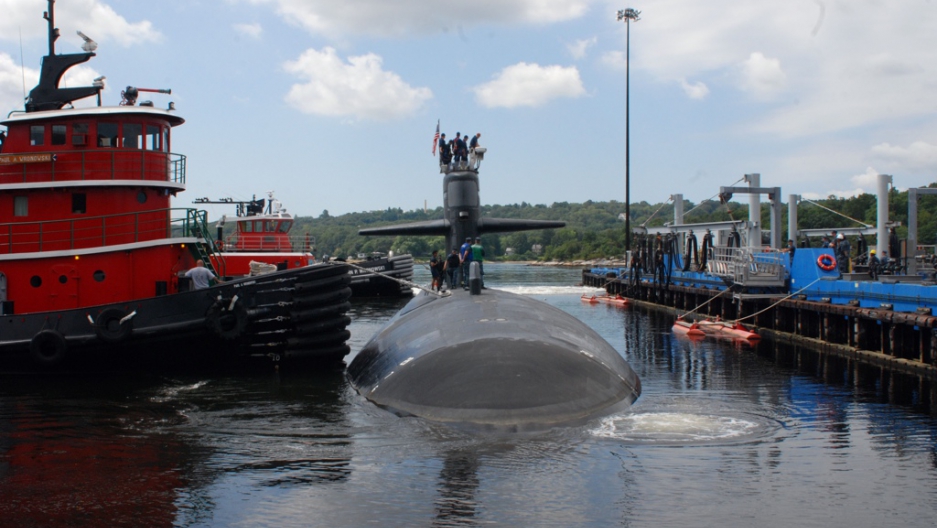 GROTON, Conn. — The US military, true to its nonpartisan ethos, has taken great pains to emphasize that the business of defending America has not shut down as a result of the impasse between the House and Senate.

But that does not mean the armed forces — or the intelligence and border patrol agents with whom they work closely — have been unaffected.

Even as US special forces units conducted multiple raids on suspected Al Qaeda-linked militants in Libya and Somalia over the weekend, US military commanders say the vast majority of their forces' operational pace and day-to-day realities has been radically curtailed by the one-two punch of "sequester" and shutdown.

Defense Secretary Chuck Hagel, surprising some in Washington, announced Sunday he has recalled most of the department’s 350,000 civilian employees furloughed last week (out of a total civilian workforce of 800,000). Hagel cited an interpretation of the Pay Our Military Act approved by Congress and signed by President Barack Obama last week, which forbids furloughs of any Defense Department employee directly supporting troops in the field.

Still, the effects have been widespread.

The website of the big naval base here in southeastern Connecticut, home to Trident nuclear missile submarines and countless attack vessels, shows a notice in an apologetic tone.

“Due to the federal government shutdown, some information on our web site may not be current,” the base commander, Vice Admiral William D. French, wrote, citing the furloughs of the civilian employees who maintain it. “I regret that we are forced to take these actions and I hope to have you all back at work as soon as possible.”

No, Jack Nicholson’s Col. Jessep and his Marines have not been furloughed from their perch on the “walls guarded by men,” as he famously barked in “A Few Good Men” back in the 1990s. But the shutdown is not the shrug its protagonists would suggest.

As millions of American TV viewers learned Sunday, broadcasts of NFL football games to US troops serving abroad by the Armed Forces Network (AFN) were among the shutdown’s victims.

Thankfully, after Fox Sports commentator Howie Long mentioned the AFN broadcast ban in a pregame show Sunday, an uproar online and by phone apparently led the Pentagon to relent. Troops abroad missed the 1 p.m. ET New York Giants-Philadelphia Eagles game (a blessing in disguise to fans of the 0-5 Giants among them). AFN did air the two late games Sunday.

But the shutdown, on the heels of the "sequestration" (federal spending cuts begun in March) of more than $500 million spread out over a decade and budget paring related to the end of the Iraq and Afghan wars, is taking a real toll.

Already forced to cancel training, maintenance, joint exercises and selected weapons purchases, the Army and Air Force “stood down” other forces after the shutdown in an attempt to save money and wear and tear on equipment they have no prospect of repairing.

Army aviation units — mostly helicopters and ground attack aircraft flown by Army pilots — were grounded last week around the world except those serving inside Afghanistan.

The Air Force, which already has virtually grounded 33 squadrons due to sequester cuts, further curtailed operations in noncombat areas since Oct. 1.

Pilots who don’t fly often are more prone to crash — or miss their targets. It’s as simple as that.

Closer to home, the Army Corps of Engineers, the nation’s primary port and waterway design and reconstruction resource, has shut down facilities and projects across the country — from locks and dams in West Virginia to campgrounds in Alabama, Iowa and Washington state. The corps also considered slowing reconstruction work in New Jersey, battered just under a year ago by Tropical Storm Sandy.

To a military family that already suffered through the indignity of multiple deployments to war zones as the very logic and viability of those wars collapsed beneath them, the shutdown is a bit like rubbing salt into a wound.

Already cuts previously planned as the Iraq and Afghan wars wound down — plus the sequester — had led to the cancellation of a Seawolf attack submarine order, trims in Air Force F-35 fighter procurements, delays in many other weapons purchases and deferral of maintenance and refurbishment of many of the military’s most complex weapons systems, from tanks to missile batteries to aircraft carriers.

More practically, it means a shortened life span for much of this equipment.

Tanks and other vehicles run hard in the deserts of Iraq and Afghanistan over the past 10 years must be rebuilt or scrapped; ships left in salt water without overhaul, naval engineers agree, lose about three years of effective lifespan for every year maintenance is deferred.

“This means fewer Coast Guard vessels in the fleet in future years — and we’re already stretched,” a senior Coast Guard commander told an off-the-record briefing at the Council on Foreign Relations in New York last week. “Salt water is an unforgiving environment.”

Earlier this year, Adm. Mark Ferguson, the Navy’s second-ranking officer, said two-thirds of the fleet has lost full combat readiness as result of canceled exercises, lost training and ships that stayed in port rather than putting to sea.

The Pentagon’s myriad programs were the beneficiaries of a “have your cake and eat it too” environment after 9/11. The military’s civilian commanders largely avoided difficult decisions on how to structure the armed forces for the post-Iraq, post-Afghanistan world.

In part, this reflects the “long war” strategy in place during the tenure of former Defense Secretary Donald Rumsfeld, but also the natural reluctance of the three services — the Army, Navy and Air Force — to sacrifice their own priorities for those of rival branches.

Most agree that the large, labor-intensive land wars in Iraq and Afghanistan represent an anomaly and that future US operations will rely more on power projection by the US Navy, Air Force and occasionally the Marines, which are part of the Navy.

“Look, we understood the budget for FY14 and beyond would be cut as we moved out of Iraq and Afghanistan,” a senior Air Force office said. The officer, like others, spoke on condition of anonymity since the Pentagon has issued specific instructions that officers not speak publicly about the political impasse in Washington. “But this is like unplugging life support. We can’t plan for complex operations, or even routine things like training and maintenance, under these conditions. And there appears to be no attempt to match capabilities to national strategy.”

The US Merchant Marine Academy — also known as Kings Point, located on Long Island, NY — suspended all classes for the future captains and crewmen who will serve on US transport and cargo vessels.

Unlike West Point, Annapolis and the Air Force Academy, Kings Point is funded by the Transportation Department and did not fall under the “essential military” exception that saved classes elsewhere.

Not to mention football games: Army, Navy and Air Force all managed to send Division I football programs into combat this weekend. All but Navy lost.

Some things, it seems, really are sacred.