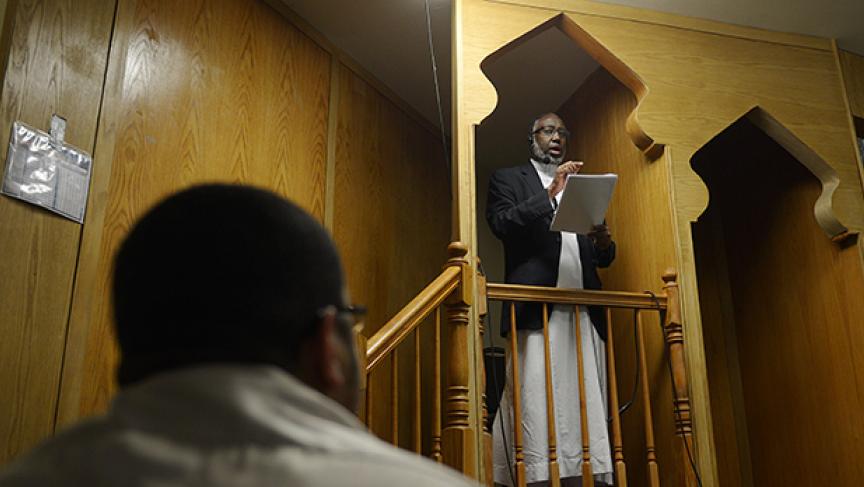 Imam Hassan Mohamud, from Somalia, speaks about the recent Nairobi terrorist attacks during an English-language service in late September at the Minnesota Da'Wah Institute.

Last month, when news broke about the deadly attack on a Kenya mall by Somalia’s al-Shabab group, one place in the United States braced itself for media attention: Minnesota. That’s because the state houses America’s largest Somali community and, in recent years, al-Shabab has recruited small groups of young Somali men from Minnesota.

Many Somalis reject the terrorist group, including one Somali-American imam determined to counter any hint of extremist talk.

Meet Hassan Ali Mohamud. He is an imam, and it’s just one of many roles he's taken up since moving to the United States. He is also a law professor, a soccer player, the father of seven, and a leader within Minnesota’s large Somali community.

His Somali nickname means "The Educated." And for good reason.

"I have three law degrees, so that’s what made me unique,” Mohamud says with a laugh.

Mohamud is 51, has a trimmed white beard and wears glasses. And he has never been shy to offer his opinions. But it is only recently that he has gone on a full verbal assault against al-Shabab, the terrorist group from Somalia.

When I first met Mohamud, years ago at his storefront mosque in St. Paul, he was skeptical of reports that young men from Minnesota were returning to Somalia to fight alongside the extremists. Back in 2008, he said, "If there is any son that was sent to violence, we need to see the proof."

Mohamud wasn’t condemning al-Shabab back then. He was staunchly opposing the Ethiopian military troops who had invaded Somalia in 2006 to prop up the country’s weak government.

At the time, many Somalis saw al-Shabab as freedom fighters, defending their land. But as the group continued its extreme violence and aligned with al-Qaeda, Mohamud says it was soon clear what al-Shabab was.

"This group is dangerous to Islam itself, and to us, as a people of Somalia, and then to the world.”

Last month, Mohamud traveled to his homeland's capital, Mogadishu, for a conference tackling extremist ideology. The Somali government invited 160 imams worldwide to strongly state that al-Shabab has no place in Islam. During the conference, two explosions hit a Mogadishu restaurant killing 20. Al-Shabab claimed responsibility and, while it is not certain whether the religious conference triggered the attack, it is clear that going to Somalia for the sole purpose of denouncing al-Shabab is a risky move these days.

“I told my family, my colleagues, the mosque, my friends to forgive me because there's the possibility that I won't come back,” he said.

And, recently, from his mosque in St. Paul, Mohamud addressed his flock with a firsthand message from Somalia. "Today what we see, my dear brothers and sisters — from some groups who claim they are Muslims — we see their behaviors are the opposite of Islam. And al-Shabab is one of them," he said.

Mohamud also read a fatwa issued at the Mogadishu conference against al-Shabab and told his worshippers that it is their duty to see that Somali-American youth understand that Islam is a peaceful religion.

Mohamud moved to the US in 1996, five years after Somalia’s civil war broke out. He said his faith teaches him to protect his American neighbors, even with the risks of denouncing al-Shabab in Mogadishu.

At the same time, as al-Shabab’s terrorism intensifies, so does scrutiny of Somalis in the US. Mohamud feels this himself. Coming back from Mogadishu, he said US customs officials detained him at the airport for extra screening.

Mohamud worries about a tighter crackdown if any Somalis who once lived in the US are linked to the shopping mall attack in Nairobi.

He said that, just after that attack, someone asked him whether he thought anyone from the Somali immigrant community in the US could commit a terrorist act in Minneapolis.

The question perplexed Mohamud and he answered, “Nothing is impossible today.”

Mohamud said that is why he preaches to his neighbors, his community, that the vast majority of Somalis here detest violence. But for a holy man whose only arsenal is his words, he says he's just getting started with al-Shabab. "This," he told me, "is war."