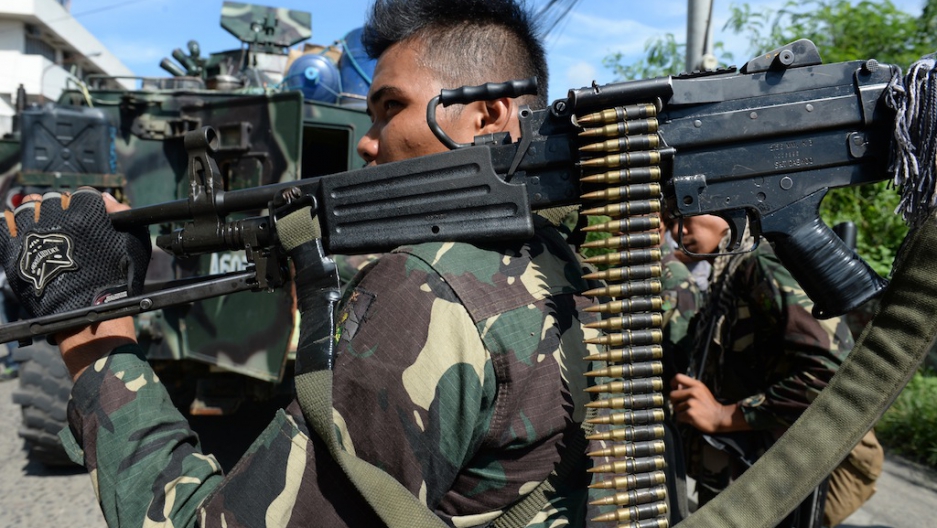 A soldier prepares to board an armored personnel carrier headed for the outskirts of Zamboanga city in Mindanao, Philippines, in pursuit of Muslim rebels, on September 17, 2013.
Credit: Ted Aljibe
Share

Authorities in the southern Philippines have ordered the arrest of four people who they say are the leaders of the Moro National Liberation Front faction responsible for a deadly attack on Zamboanga city last month.

They have been charged with rebellion and human rights violations.

Misuari, who is the founder of the MNLF, has been accused of ordering the attacks.

"I'm convinced that we have sufficient and strong evidence this time around to prosecute successfully Nur Misuari," de Lima told reporters.

Hundreds of MNLF fighters stormed into the port city of nearly one million people on Sept. 9 and seized more than 100 residents in an apparent attempt to derail government peace talks with a rival Muslim group.

More than 200 people were killed, tens of thousands forced to flee their homes and thousands of homes burned to the ground in the ensuing three weeks of fighting between the rebels and government forces.

The rebels were eventually forced out of the city and their hostages freed.

Misuari and his men are still at large.

Muslim rebels have been waging an armed campaign against the government since the 1970s. They want an autonomous region for minority Muslims in the predominantly Catholic country.

Misuari signed a peace accord with Manila in 1996, but the MNLF rebels kept their weapons and have since accused the government of violating parts of the agreement. One of the claims is the government hasn't developed the poor Mindano region.

The group has also reportedly felt excluded from negotiations between the government and a larger rival faction, the Moro Islamic Liberation Front, which split from the MNLF in 1978.