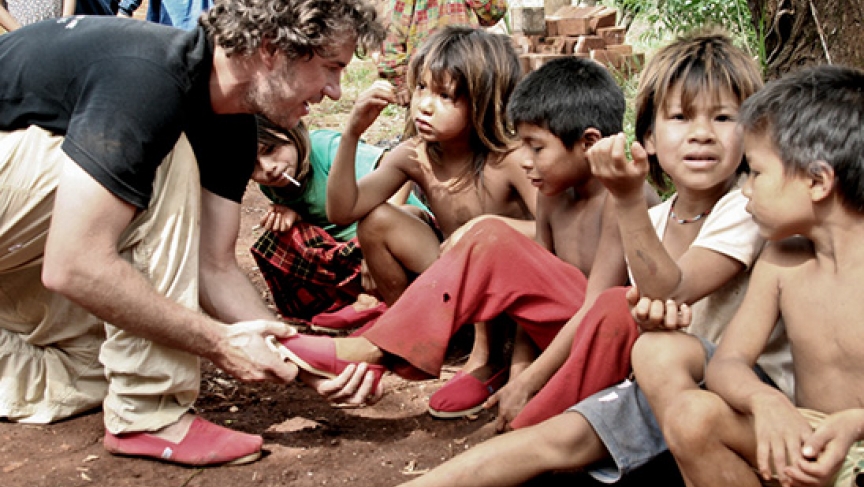 The "buy one, give one" business model of TOMS Shoes - buy a pair and the California-based company will give a pair to a child in need - has spawned many copy-cats.

These days, you can buy an array of products - from solar panels, to baby goods, to soccer balls - and the manufacturer will give a similar product to a needy person, often someone in the developing world.

But many consumers have been asking: Does the "buy one, give one" model actually fight poverty?

The founders at TOMS Shoes have been asking themselves that question, too.

Their do-good model has been the subject of criticism. Among other things, critics wonder if TOMS is displacing local shoe producers, by bringing in their shoes from elsewhere.

Amy Costello, a journalist and host of the Tiny Spark podcast, has been a critic of the TOMS model. Now, she says the firm is starting to listen to its critics.

She points to a recent decision by TOMS to manufacture some of its shoes in Haiti beginning in January, 2014. TOMS plans to employ 100 Haitians and build a "responsible, sustainable" shoe industry in Haiti. TOMS founder Blake Mycoskie pledged that, by the end of 2015, TOMS would produce a minimum of one-third of all its giving shoes in places where the shoes are distributed to needy individuals.

"I give [TOMS] credit. I think it's a wonderful development," Costello says. "But I would say that the company still has lots more work to do in this space, to have the impact that it can have."

Costello argues that giving consumer items to the impoverished is not the solution to poverty.

"We think that by simply giving people things that we enjoy - like soccer balls or shoes - that we are somehow doing good," Costello notes.  "And I think that we really need to start questioning that a lot more, and figuring out is there something we can do that is a lot more effective?  [Are] consumer products what a impoverished community needs?"

Instead, Costello prefers that companies ask what a community needs, and listen to people's requests.  Partnership, she says, and giving communities access to markets, will do much more to lift individuals out of poverty and help them improve their own lives.

Amy Costello is a former Africa correspondent for PRI's The World. She now hosts Tiny Spark, a podcast that investigates the business of doing good. Costello's Tracking Charity series for The World follows up on celebrated aid projects, public health initiatives, and charities.