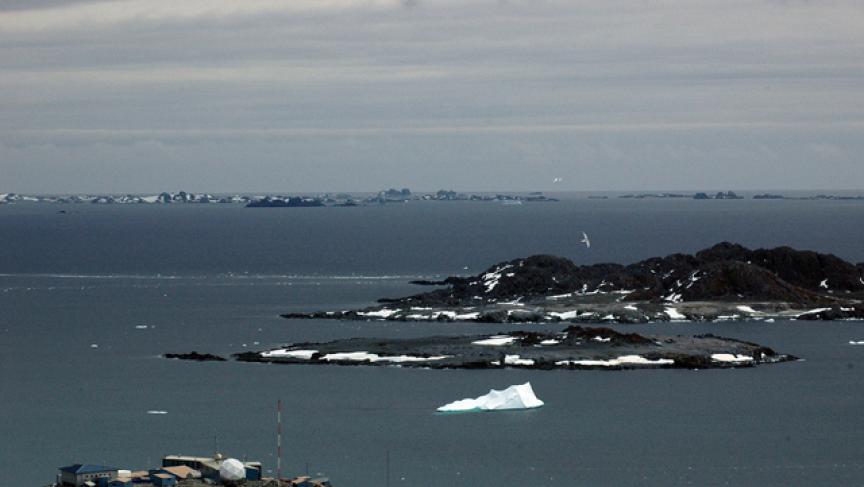 Looking out from Palmer Station, Antarctica

October marks spring in Antarctica, and the start of a new field research season. Scientists will be heading to McMurdo, Amundsen–Scott and Palmer research stations to study glaciers, ecology and climate. Or will they?

The headlines of the magazine Scientific American say it all:  "U.S. Antarctic Research Season Is in Jeopardy" and "Shutdown may force evacuation of U.S. research stations."

Hugh Ducklow directs long-term ecological research at Palmer Station. He says uncertainty over how long the government shutdown will continue has scientists anxious about their research.

"As of midnight, Sept. 30, 2013, several U.S. government operations have entered a period of shutdown due to lack of funding. Although the National Science Foundation (NSF) will be closed for routine operations until further notice, we remain committed to protecting the safety and health of our deployed personnel in Antarctica and the Arctic. NSF has a small number of 'excepted' employees who will remain on the job expressly to ensure the safety of personnel and property in the Polar Regions."

"Activities will be continued this week to resume flight operations to McMurdo Station, Antarctica, and at no time will we compromise our ability to access our personnel for safety and continue operations as appropriate. We will continue to house, feed, and provide care for our personnel currently in Antarctica without exception."

"We are hopeful that this situation is resolved with limited disruption to the critical research our nation is performing in the Antarctic and to our cooperative commitments to the international community of Antarctic programs, upon which the Antarctic Treaty was founded."

But it has been reported that Lockheed Martin, the US contractor that actually runs the NSF’s Antarctic operations, "has told researchers that it will run out of money by mid-October." So what does that mean for researchers who left last week from Punta Arenas, Chile on a ship headed for Palmer Station?

Ducklow isn't sure, but he says some Antarctic research projects have been going on for 20 years, so any interruption of the ongoing data collection could undermine the scientific validity of the research itself.

He says researchers are closely monitoring the ecology of the Antarctic Peninsula because it is one of the most rapidly changing ecosystems on Earth. Climate change, he says, is affecting the entire ecosystem, from plants low on the food chain on up to Adelie penguins and whale populations. "We're really at the point with some of these penguin populations where they could flicker out of existence at any time and so we just can't afford to miss anything."

And Ducklow says US scientists work within international collaborations: "For every day this goes on or the US research work is postponed or discontinued, its just takes away from US credibility on the continent."