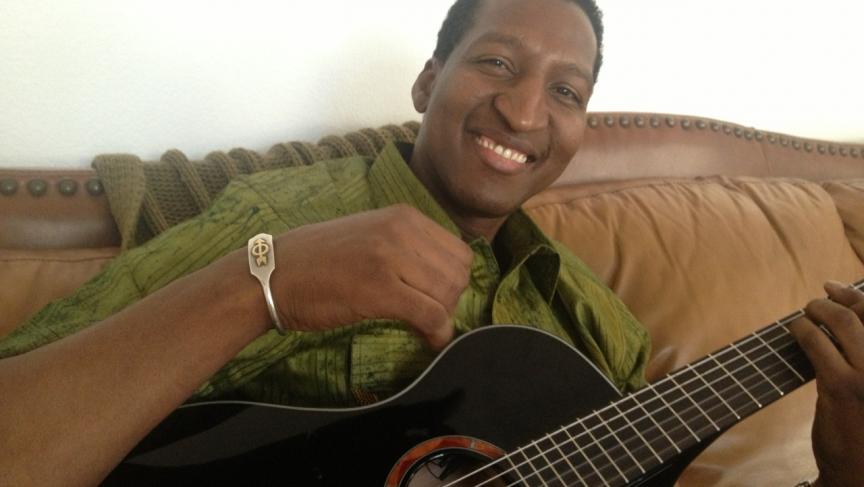 When you think of a Las Vegas lounge singer, you might imagine an aging star bathed in neon, hoping his hairpiece stays in place.

Las Vegas musician King Ibu is anything but that image.

Tall, dark and handsome, this soulful singer has a smile a mile wide, and a voice that's taken him around the world from his native Senegal.

"I've played with Poncho Sanchez, a Cuban percussionist.  I've played with legends like Carlos Santana.  You know, that's not just given to any kid from my hometown to play with such a name."

Ibu moved to Las Vegas a decade ago to play in a casino cover band, a gig he thought would allow him to bring his music to American listeners. But these days, he manages a retail store to pay the bills. As it turns out, selling African music in Sin City is just as hard as it sounds.

“It was the toughest thing to do because I couldn't find anybody else from Africa here, or anybody who had a decent understanding of the concept — the rhythms, and so on.  And that's when, really, I hit a wall," he said.

Eventually, Ibu found ways to collaborate, connecting with friends back in Africa on Skype, and doing live shows when he could.

But Las Vegas isn't the first place Ibu struggled to be part of a music scene. It was in his hometown, a village called Podor, on the border of Senegal and Mauritania.

“I come from a family where you're not supposed to play music, because of the caste system," he said. "So if you come from a noble family, you don't touch instruments.  You have what they call your 'griots' playing music for you. And every afternoon when they would come to the house playing, I wanted to be sitting amongst them, rather than sitting on the other side listening to them, and that has marked me.  I watched them and learned from them."

In Las Vegas, a world away from his childhood home, Ibu recently found a collaborator: A musician named Peter Fand who moved to Las Vegas to play for Cirque du Soleil but had lived and worked in Africa for many years.

"Although there is not a lot of people here playing this form, the people that I've found have been par excellence.  And that's kind of exciting because even if it’s not a big scene, I have a feeling we could make a very rich scene here,” Fand said.

A rich, and somewhat political, scene. Ibu has written a song for children who were orphaned during Rwanda's genocide in the mid 1990s. Both men appreciate the need for raising Americans' consciousness about events back in Africa.

"I realized after studying, going to university and learning about what's going on,” Ibu said, “that I wanted to be a voice for the third world, for Africa. Africa is not only disease.  Africa is not only war, it’s not only poverty.  We have beautiful things, too. As long as I have this opportunity, it’s not just about the show and the music, that message about Africa, that people need to look at it differently."

It's a message, coming from an African singer in the American desert, he hopes to take around the world.