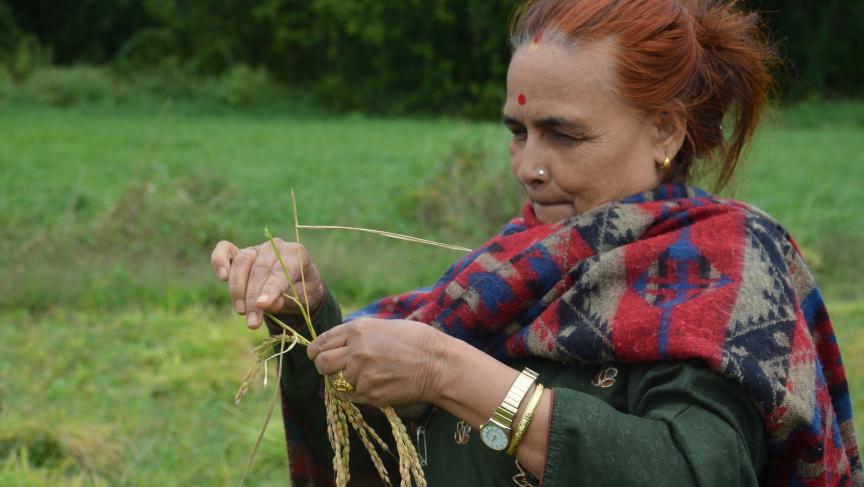 A Bhutanese woman harvesting rice in a Vermont paddy.

Rita Neopaney would have preferred better weather for today's rice harvest; it’s chilly and overcast. But she's philosophical about it.

“Today, the climate doesn't favor us. No sun. So what to do? Vermont,” she says.

There are many places in the world known for producing rice - China, India and Japan, to name a few. Vermont is not one of them. But a community of refugees from the Himalayan kingdom of Bhutan is beginning to experiment with the grain in this New England state.

Neopaney and dozens of other Bhutanese refugees have come out to the Ethan Allen Homestead to pick rice in the traditional way -- with their hands. No machinery.

Some people cut the rice from the quarter acre paddy, while others bunch the stalks and tie the bundles with twine. Still others beat the bundles against logs to dislodge the rice grains.

“They cannot wait and watch. If somebody cut that, my job is to tie,” says Neopaney. “And my job is to beat."

The Bhutanese rice paddy is a project of the Association of Africans Living in Vermont, though these are refugees from Asia. The group runs a program called New Farms for New Americans, which provides refugees with land so they can grow foods from home. Last year, Bhutanese elders here suggested they might like to farm rice.

“Rice is one of the most culturally significant foods for this community,” says Alisha Laramee, who oversees the rice paddy project.

“It's eaten twice a day in all the homes. Right now in this area, there are over 1,500 Bhutanese, so this is something that's in high demand in people's homes.”

It might seem odd to farm rice in such a cold climate. But the Bhutanese found a Japanese cold weather rice variety and planted it last year as a test. It was so successful, they expanded the paddy this year. Rice needs lots of water to grow, but thanks to the nearby Winooski River the paddy had plenty of it.

If all goes well, next year's paddy will grow to five acres.

“It's an experiment in the making, but it's proved to be really successful for the community,” says Laramee. “I think there's a lot of memory associated with this project in particular.”

The refugees here in Vermont are Bhutanese by nationality, but they're ethnically Nepali. In the 1980s, the government of Bhutan began expelling ethnic Nepalis, who spent decades in refugee camps in Nepal.

Back in Bhutan, everyone knew how to farm rice, says Ashok Dahal, who’s harvesting today.

“It didn't matter how good you were with other jobs or how much you study. You had to know how to plant the rice,” he says.

Most of the people harvesting the rice on this day are elders like Dahal. But the younger Bhutanese were raised in refugee camps, and there were no rice paddies in the camps.

“That younger generation, they don't remember this,” says Laramee. “I do wonder, because this is associated with an older generation, will this be lost for the younger folks.”

After the Bhutanese have made their way through much of the paddy, cutting clumps of rice with hand sickles, Neopaney invites onlookers to help out.

“Excuse me, please. If you want to help us you can come over.”

So I get a sickle and wait for some instruction. Rita Neopaney shows me how to grab the rice stalks and cut them.

I whack the stalks with the sickle. A grass-green bunch with golden pods full of rice falls into my hand.

Then, as if the universe wanted to prove to me how hard this work is, I slice my finger open with the sickle. A gasp goes up from the women working in the field.

It's true. Skills are critical for harvesting rice, and the Bhutanese have them. Their haul is much bigger than they expected - about 1,100 pounds.

They won't eat this rice. Instead, they'll dry it and save it to plant next year. If all goes well, a year from now the Bhutanese in Vermont will be making daals and curries with the rice they grew. And that will bring them just a little bit closer to the life they left so many years ago.