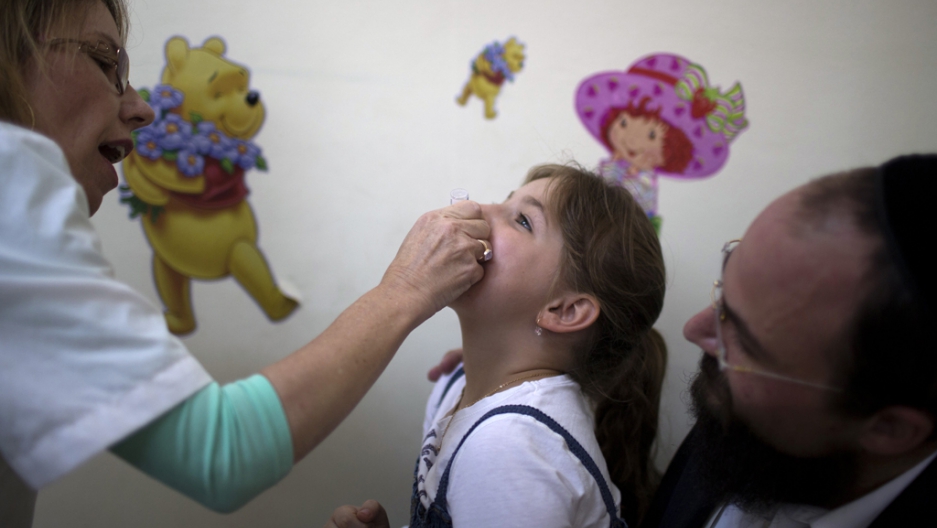 An Israeli child receives a vaccination against Polio at a clinic in Jerusalem on August 18, 2013. Israel took its polio vaccination campaign nationwide.
Credit: Menahem Kahana
Share

Over the last several months, wild poliovirus has been discovered circulating in Israel for the first time in 25 years. Although no paralytic polio cases have been reported, the presence of the virus – and the possibility of further spread within or beyond Israel – threatens the immense progress we’ve made toward global eradication.

Since the Global Polio Eradication Initiative (GPEI) first began its work, cases have dropped more than 99 percent to a record low of 223 in 2012. Down from 125 endemic countries in 1988, only three countries — Afghanistan, Nigeria and Pakistan — have never eliminated wild polioviruses, remaining capable of re-infecting other countries.

However, these countries have been stepping up efforts against the disease, resulting in 40 percent fewer cases as of September 11 of this year, compared to the same time last year.

The world’s progress toward eradicating polio is cause for celebration, but not complacency.

Israel is the only country outside of the three remaining endemic countries, and some countries in the Horn of Africa, where the virus has been found. This reminds us that so long as the virus exists, the disease could make a resurgence anywhere, even in countries that have been free from polio for decades.

We simply can’t rest until the virus has been eradicated.

The lack of even a single case of paralytic polio in Israel can largely be credited to the country’s high immunization rates, a sophisticated surveillance system, and the launch of a rapid emergency vaccination response. These three elements are core pillars of the GPEI’s Polio Eradication and Endgame Strategic Plan, launched in May, which will work to achieve a lasting polio-free world by 2018.

Examining how these interventions are protecting the Israeli population demonstrates that their replication in other countries is essential to eradication efforts.

First, we’re seeing the protective power of high immunity levels. Israel has one of the highest immunization rates in the world, which explains why the circulating virus has not resulted in a single case of paralytic polio. If immunity were low, we’d be seeing an outbreak, as we are in Somalia and as was the case in Tajikistan, which reported more than 450 cases of polio in 2010, eight years after the country had been declared polio-free.

Because high immunity levels are contingent on a system that can effectively deliver vaccines, a key objective of the strategic plan is strengthening immunization systems worldwide. In fact, the plan commits at least 50 percent of GPEI field personnel’s time to bolstering routine immunization in endemic and high-risk countries. This work is critical to prevent new outbreaks, and its benefits extend far beyond polio.

Second, Israel reminds us that strong surveillance systems are key to rapidly detecting and responding to polio threats. A first-class environmental surveillance system – which involves testing sewage or other environmental samples for the presence of poliovirus – allowed Israel to launch its response before the onset of any cases. Similar rapid mobilization took place in Egypt earlier this year, when polio was found in two sewage samples.

The strategic plan calls for an expansion in surveillance capacity globally, including the scaling up of environmental surveillance, to help us find and contain viruses before they have a chance to spread widely.

This investment will help combat other health and humanitarian threats as well. In fact, the polio program’s surveillance infrastructure already assists in the detection of and response to other diseases, including measles, yellow fever and neonatal tetanus.

Third, the situation illustrates the critical role the two different polio vaccines play in rooting out the disease. Most countries at risk for polio use the oral polio vaccine (OPV), which is cheap, effective and easy to administer. OPV creates intestinal immunity that helps stop person-to-person transmission of the virus. The drawback, however, is that OPV uses a weakened but live virus and, on very rare occasions, that virus can mutate and cause paralysis.

For this reason, wealthier countries that had already eliminated polio, including Israel, tend to use the inactivated polio vaccine (IPV), which has no risk of inducing paralysis.

In vaccinated individuals, IPV induces a high level of protection from paralysis, but may be less effective than OPV at stopping person-to-person spread of the virus. Particularly in areas where sanitation and hygiene is poor, the virus can still be passed on to others, enabling it to travel through populations and pose a serious threat to any unimmunized people it comes across.

That’s why it is critical for countries that only use IPV to have intense poliovirus surveillance and, when transmission is detected, to intervene with immunization campaigns using OPV. This is precisely what happened in Israel, which has used IPV since 2005. In August, the government launched a nationwide campaign to vaccinate all children under nine years of age with OPV. Unabated, the virus has been traveling across the country and was recently detected in the West Bank and Gaza, threatening neighboring countries. The vaccination campaign, which has already reached 50 percent of its target population, is critical to preventing further spread.

The strategic plan leverages the strengths of both vaccines and lays out a six-year strategy that integrates both. It relies on OPV as the main vaccine to interrupt transmission and calls for the global introduction of IPV. It ultimately envisions withdrawing all OPV once no wild poliovirus remains, to forever eliminate the risk of vaccine-derived polio. Importantly, it includes the maintenance of stockpiles of OPV to be used for outbreak control, if needed, as IPV is scaled up.

Israel’s experience shows that polio is a global threat, requiring global commitment and vigilance. But it also shows the strategic plan’s strategies effectively at play: high routine immunization has been protecting the population, strong surveillance allowed the country to detect the virus in the first place, and now OPV campaigns will interrupt transmission.
The plan’s strategies are working in Israel, and they will work elsewhere.

Now, the world must rally behind this plan and capitalize on the current opportunity to rid the world of polio for generations to come.

Dr. Walter Orenstein is a professor and Associate Director of the Emory Vaccine Center at Emory University. He previously served as director of the US Centers for Disease Control and Prevention’s National Immunization Program and consulted on polio eradication programs for the World Health Organization and the Pan American Health Organization. He was part of the team that investigated Israel’s 1988 polio outbreak.