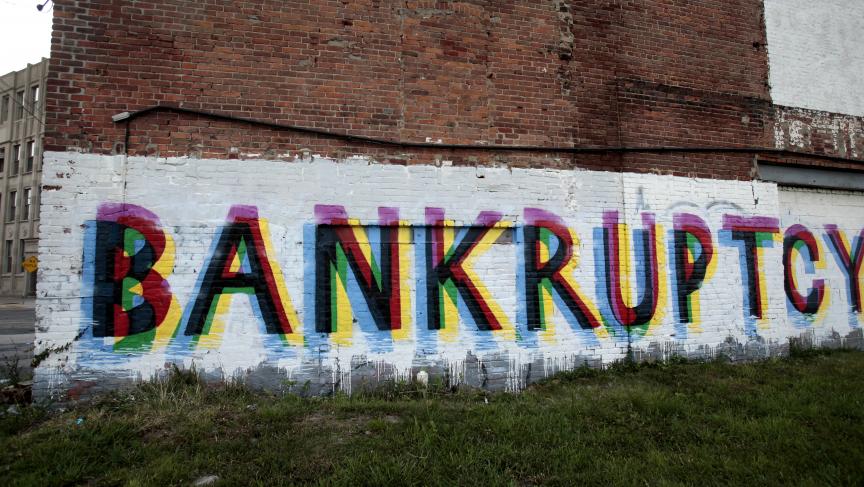 The word 'Bankruptcy' is seen painted on the side of a vacant building on Grand River Avenue in Detroit. Street artists painted the words as a statement on the financial affairs of the city.

When the city of Detroit filed for bankruptcy this summer, a lot of people lost a LOT of money including a group of banks in Europe.

"Before the financial crisis, when European banks were buying all sorts of crazy things in the US like mortgage debt, they also bought a bunch of bonds from Detroit and lent them a ton of money — about $1 billion," Fernholz explained.

And Fernholz said when Detroit went under, Dexia, Commerzbank and Depfa — based in Belgium, Germany and Ireland — dug in their heels, arguing for a larger piece of the leftover bankruptcy pie. The trio was already hemorraghing from losses caused by  the European financial crisis — so this bad debt would have put their finances in a perilous position.

"They found themselves dealing with big losses that they really couldn't afford, especially because a bunch of these banks are owned by national governments, which is to say they're owned by European taxpayers who don't want to take losses thanks to something happening in a city across the Atlantic," Fernholz said.

It remains to be seen what impact these European banks will ultimately have on Detroit's bankruptcy. Detroit's emergency manager, Kevyn Orr has said he wants to resolve the situation by the end of his term. Orr is expected to remain in charge for 18 months from when he started, in March.