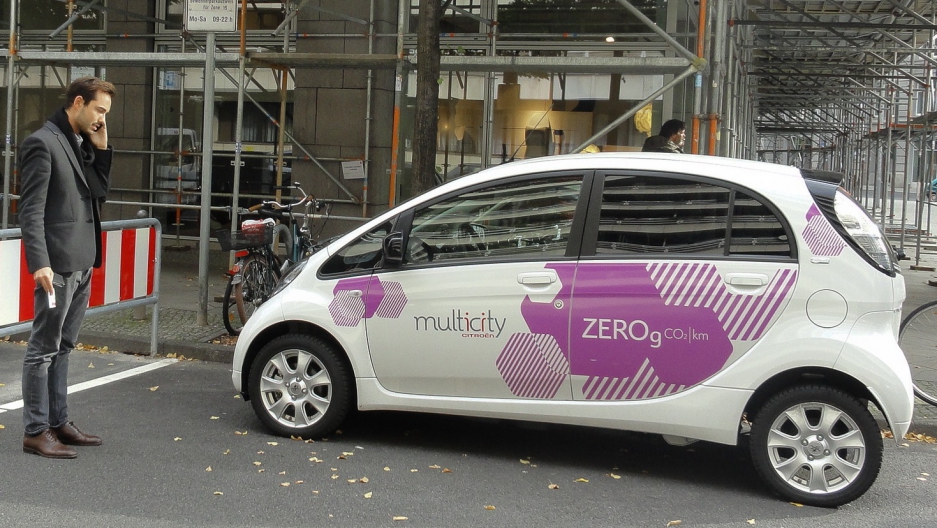 Mauricio Sabater with his ride for the day.
Credit: Pedro Oliveira Jr.
Share

BERLIN, Germany — Mauricio Sabater steps outside his downtown office on a cold early fall afternoon, wraps tight his pea coat and pulls out his iPhone.

The 27-year-old project manager at a branding agency wants to find the quickest way to a business meeting in former East Berlin, where he’s set to tour a dilapidated railroad warehouse that his client wants to rebuild into an art complex.

Instead of calling a taxi, he navigates through an app. Within seconds, he finds a compact hatchback parked two blocks away. It’s one of 350 Citroën C-Zero electric cars provided by Multicity, a car-sharing company owned by the French automaker.

Sabater is part of a new trend in Germany: Some 460,000 Germans have shifted to car-sharing, up from a shy 20,000 customers back in 1997, according to industry association Bundesverband CarSharing. And it’s forcing the world’s largest automobile exporting industry to adapt.

“I have hundreds of cars at my disposal everyday,” says Sabater, a Barcelona native, as he zips toward the Friedrichshein neighborhood, passing at least another half-dozen car-sharing vehicles.

Sabater, who subscribes to every major short-term rental service in Berlin, says owning a vehicle is “completely out.”

“I don’t need one,” he says. “It doesn’t make any sense nowadays, especially in big cities where you have a host of services at your disposal that are much cheaper than owning your own car.”

It helps that insurance and maintenance are included in the price of 28 cents per minute to rent a C-Zero.

“Before, you could buy a car and park anywhere and insurance wasn’t that expensive,” Sabater says. “Now, everything is triple. Given the situation right now, if you have so many mobility alternatives, why would you own a car?”

BMW and Mercedes-Benz have already jumped into the market: Both auto giants own car-sharing companies. Mercedes-Benz offers Smarts in Berlin, Cologne, Hamburg and Munich through car2go.

BMW has stepped up the game with convertibles from its luxurious 1 Series and X1s alongside Minis through DriveNow, which has some 157,000 members.

Even the railway company Deutsche Bahn is in the game, supplying Fiat 500s and Volkswagen Golfs through Flinkster.

Other companies are taking part in different ways. The airline Lufthansa gives employees car-sharing subsidies to save on the cost of providing parking infrastructure.

Although Citroën’s Multicity is a newcomer to Berlin, membership numbers have jumped fourfold to 4,467 since January.

“Automakers finally realized that with the increase of consumers’ sustainability sense, they find it more and more difficult to buy their own cars,” says Multicity spokeswoman Jessie Warmal in a telephone interview from Cologne.

The average car-sharing customer is between 25 and 40. Most are environmentally aware men with above-average education who turn to car sharing for short trips, usually less than 24 hours and between 12 to 62 miles.

“If I want to go to a restaurant and drink something, I can leave the car there,” Sabater says.

In a city where biking is second nature for many residents, it seems logical Berliners would embrace the zero-emission electrics.

There are about 8,000 electric vehicles in Germany. The government wants to increase the number to 1 million by 2020.

Around 30 percent of new customers sell their own cars soon after joining a short-term rental service. Those who keep their vehicles reduce their private car mileage by some 58 percent per year on average, from 4,375 to 2,530 miles.

The dramatic shift in car use here is far greater than in North America, with its car culture and spread-out cities.

But it’s caught on elsewhere across Europe. In Amsterdam, Smarts from Mercedes-Benz’s car2go weave through traffic along with the thousands of colorful bikes. Other companies have set up, too.

The Netherlands, Austria, Germany and Switzerland have the greatest concentration of car-sharing vehicles in Europe.

Michael Kuhndt, who heads the Collaborating Center on Sustainable Consumption and Production in Wuppertal, says the trend isn’t likely to slow down.

“Mobility in the future will be a combination of bikes for short distances, car sharing and public transport,” he says. “It will be using all these different transport modes, from car and bicycle to whatever you can imagine, for the best way to go from A to B.”

For now, he adds, automakers have little to fear. “We will probably see an increase in car sharing but maybe not necessarily a drop in car ownership,” says the researcher, who still owns a car because of his family, although he regrets the “impact it generates.”

Kuhndt believes it will take 50 years for car ownership to drop. “In the end, we need all those companies finding smart ways,” he says. “Car-sharing is just an interim step for even smarter technology.”