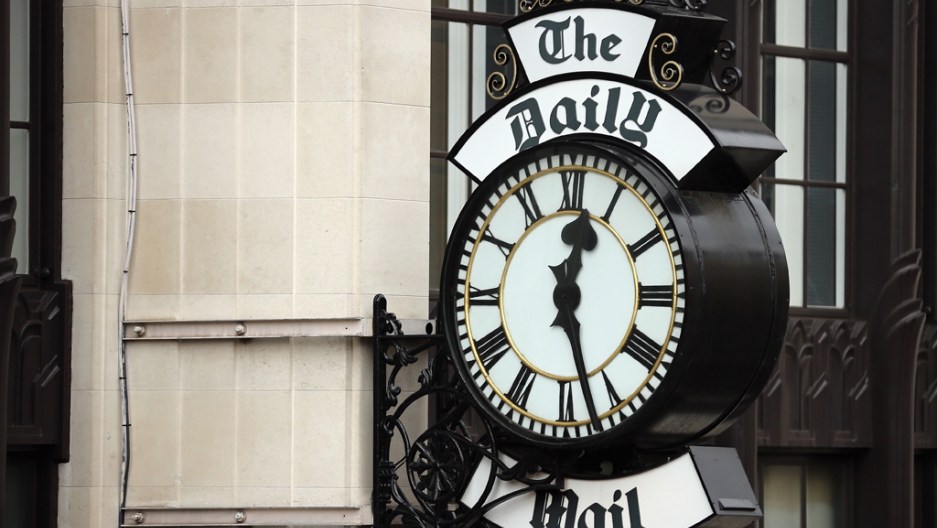 A general view of a clock on the side of Northcliffe House, where the offices of British newspapers the Daily Mail and Mail On Sunday are located, on October 4, 2013 in London, England.
Credit: Dan Kitwood
Share

LONDON — The British public is used to shock, horror and hyperbole in their tabloid newspapers, but even by British standards the headline that appeared in last Saturday's Daily Mail was outrageous: "The man who hated Britain".

The man in question was the late Ralph Miliband, Marxist scholar and the father of opposition Labour Party leader Ed Miliband.

The headline went on to say that ‘Red Ed’ was honoring his father's memory by bringing back socialism.

Actually, this is not true. In fact, Miliband senior, who was a star professor at the London School of Economics, argued constantly with his son about the Labour Party's turn away from socialism.

But to the tabloid, that detail was not important. What was paramount was to score points for the party on the right. The Mail is the most right-wing newspaper in a country full of them.

The Labour Party had just held its annual party conference and Miliband gave a very successful speech. The Conservatives were about to hold their conference and clearly the Mail wanted to take Miliband down a peg or two. They thought they had found a weak point.

But here the response of the Labour leader's conservative opponents has been very different. There has been general condemnation of the Mail article by Prime Minister David Cameron and former Tory Deputy Prime Minister Michael Heseltine.

John Moore, now Lord Moore, a member of Margaret Thatcher's cabinet, was also a pupil of Miliband's at LSE. He was incensed by the article and issued a statement saying,

"I saw him week after week and it beggars belief that the Daily Mail can accuse him of lacking patriotism. I never heard him ever say one word which was negative about Britain – our country."

But this is a story that runs deeper than just taking a cheap shot at a politician by maligning his dead father.

As the Daily Mail article notes in the third paragraph, the Miliband family is Jewish, with origins in Poland. Ralph Miliband was born in Belgium. As the Nazis marched in, then 16-year old Ralph walked with his father more than 100 kilometers to the port of Ostend. The pair managed to get on the last boat for Britain.

Back in Poland, many Miliband family members died in the Holocaust.

It's a dramatic story and one Ed Miliband has told often to show how much he loves Britain, the country that took his father in.

The Daily Mail's proof for its allegation that Miliband hated Britain — and by inference his "socialist" son must hate Britain, too — is a diary entry written by Ralph Miliband shortly after he arrived.

"The Englishman is a rabid nationalist. They are perhaps the most nationalist people in the world . . . you sometimes want them almost to lose (the war) to show them how things are."

Taken out of context the words seem harsh — but the author was 17, and seems to be mimicking George Orwell as much as anything.

And Miliband's actions spoke much louder than his words. He joined the Royal Navy and saw action on a destroyer during the D-Day landings.

The Daily Mail has its own bad history in that moment - and particularly in relationship to Jews.

The paper's owner in the 1930s, Viscount Rothermere, embraced the concept of appeasement up to the last minute. His own writings make it clear he was enamored of Hitler and the Nazi party. He was also an anti-Semite.

In an article written in 1933, six months after the Nazis seized power in a constitutional coup, Rothermore wrote, "I write from a new country on the map of Europe. Its name is Naziland."

He went on to praise Hitler for invigorating Germany's politics, inspiring its youth and insulting the Jews.

"The German nation, moreover, was rapidly falling under the control of its alien elements. In the last days of the pre-Hitler regime there were 20 times as many Jewish Government officials in Germany as had existed before the war (WWI). Israelites of international attachments were insinuating themselves into key position in the German administrative machine … It is from such abuses that Hitler has freed Germany."

This is all history the Mail's current publisher, Rothermere's grandson, would like to forget.

But the article has revived its memory in the British public. A popular mash-up photo, making the rounds on social media, asks What Did You Do to fight the Nazis?" The photo shows Rothermere meeting Hitler and ships guarding a D-Day beach.

The article has also revived this memory in the Jewish community. The Jewish Chronicle labeled the article anti-Semitic.

It also ran a column by novelist Linda Grant saying, "The Mail’s attack on Ed Miliband through his father was, of course, an assault on the other strand of Jewishness, the dangerous intellectual class … "

Grant also pointed out that there is another strand in the Jewish community that is far from left-wing and intellectual.

This is the conservative group, who supported Margaret Thatcher and adored her for appointing many Jews to her cabinet and her staunch support of Israel. This constituency also reads the Daily Mail and will note that the original article was written by a Jew.

This saga is far from finished. In pursuit of more details, the Mail on Sunday sent two reporters to intrude on a private memorial service for Miliband's uncle, a prominent physician.

In response, Miliband contacted Rothermere directly. He wrote, "The reaction of many people to the Daily Mail's attacks on my father this week demonstrates that the way your newspapers have behaved does not reflect the real character of our country."

Rothermere has promised to respond.

Meanwhile, the Daily Mail's hope of diminishing Miliband's political standing by attacking his father has backfired. The latest Yougov opinion poll in the Daily Telegraph says if the election happened today, the Labour Party would win an 80-seat majority.