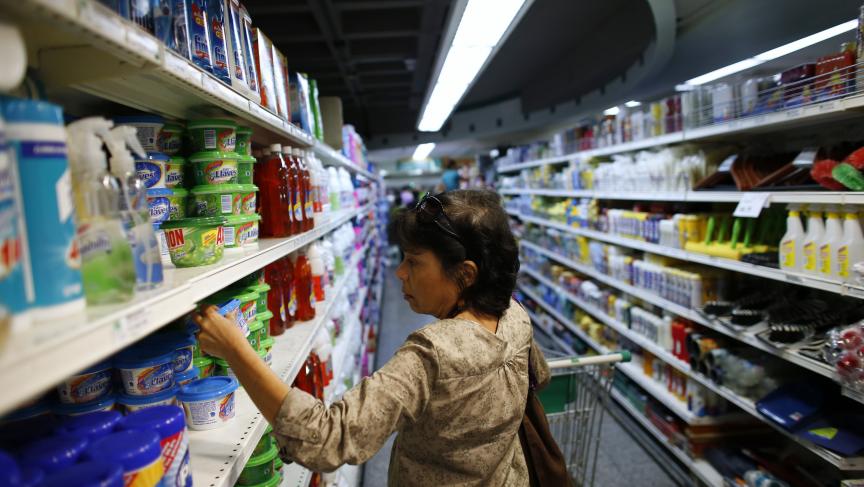 Supplies of food and other basic products have been patchy in recent months in Caracas, Venezuela. The situation has spawned jokes among Venezuelans, particularly over the lack of toilet paper.

“It always happens. It’s the only country that you can buy something, and you can use it, and the next day it costs more.”

Rafael isn't exaggerating, at least not about the prices. In August, Venezuela’s yearly inflation hit more than 45 percent. Its scarcity index jumped to 20 percent, which means that one in five products has disappeared from store shelves.

‘La Crisis,’ as it’s being called, has been brought on by a myriad of factors. Its consequences are apparent at El Rincón de Isabel, a family-owned restaurant in the regional capital of Mérida.

“A year ago, just imagine, a pound of beef cost $3 or $4; now it costs $9," said Señora Torres, the family matriarch.  "A year ago, you were able to find ingredients at the supermarket, at any supermarket.  Now we need to go from store to store looking for ingredients,” she said.

Here’s the problem: Venezuela imports 70 percent of the food it consumes. With its currency, the Bolivar, all but worthless internationally, importing food and other goods requires US dollars. The exchange rate is strictly controlled by the Venezuelan government, which also limits the amount of US dollars that people can buy.

This dearth of dollars has led to a thriving black market, good news for underground money changer Rafael Trujillo.

“This has been going on for 10 years now here in Venezuela,” Trujillo said. “Getting dollars legally through the government is very difficult for business owners, so they get them on the black market.”

The official exchange rate remains at 6.3 Bolivares to the dollar. The black market value is about 40. It’s expected to hit 50 or 60 by December.

With faith in the Bolivar dropping and speculation on the US dollar rising, importers are required to spend more to bring products into the country. Those higher costs trickle down - to restaurant owners, to shop keepers, and to average Venezuelans.

Carlos Lopez, a young professional in Caracas, says his monthly grocery bill nearly quadrupled in the past eight months alone. And he’s had to find a second job just to break even.

“The truth is, I’m not very hopeful,” he said. “I don’t have many plans for the future, because the inflation does not allow for such plans. Sometimes it feels like Venezuela doesn’t have much to offer me.”

This sense of disenchantment and hopelessness is spreading fast. Just over six months after the death of Hugo Chavez, Venezuela’s socialist dream seems to be in jeopardy. If the government doesn’t get some grease on the tracks quickly, the Chavista revolution may just come to a sudden and screeching halt.