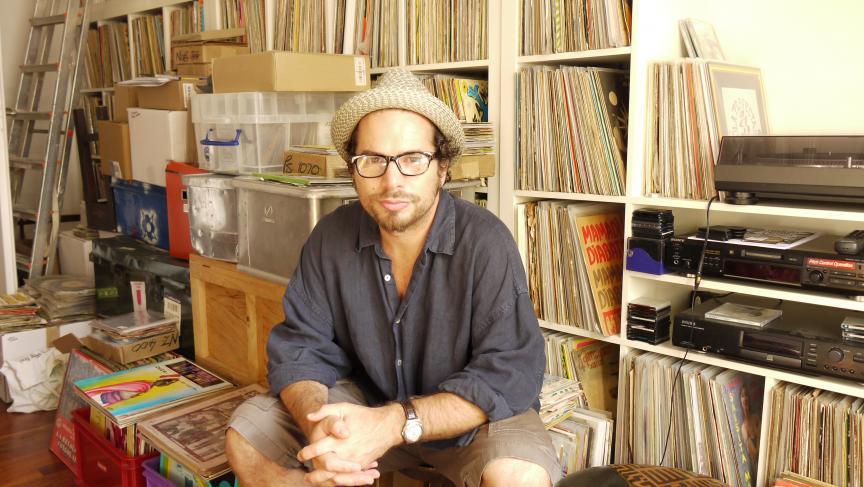 Samy Ben Redjeb grew up in Tunisia. He moved to Senegal to deejay and teach diving. And he spent his free time hunting for rare records all over Africa.

“After doing that for five, six years, I started feeling a kind of a pressure because I was spending all my money on traveling and I remember a friend of mine came to see me and he said, 'You know what Samy? I just found a job with Lufthansa and if you don't know what to do this is probably now the right time because they really need personnel.' So I thought oh that might be a good idea,” Ben Redjeb says.

He applied, got hired as a flight attendant with Lufthansa in Germany and chose a route that took him back to Africa. It was the perfect job for him. He flew to Lagos, Nigeria, Addis Ababa, Ethiopia, and Accra, Ghana, on a monthly basis.

“I started having connections who were looking for records for me and then every time I was going, they had already prepared stuff that I just listened through and then selected what I wanted and then flew back with that,” he says.

Ben Redjeb made about a thousand trips to Africa while working for Lufthansa and brought back countless pieces of music.

“That's basically how I really managed to get all (this) record collection which is now the base for my label,” he says.

Ben Redjeb runs his label, Analog Africa, out of a packed apartment in Frankfurt. He selects tracks from his many rare records to create new compilations.

The most recent release, "Afrobeat Airways 2," focuses mainly on Ghanaian music from the '70s. One of the tracks from the band, Complex Sounds, showcases some of the horn-heavy 'highlife' style that was so huge in Ghana. Ben Redjeb got turned on to this music scene on one of his visits to Accra.

“While I was there, I was looking for records and talking to musicians and to collectors and they were telling me about how vibrating the music scene was there," Ben Redjeb says. "It was difficult for me to picture really what was going on but, then, I found the stamps of a photo studio in Accra.”

Accra's Modern Photo Company was located next to one of Accra's hottest clubs in the 1970s, the Tip Toe.  So, Ben Redjeb went to the photo studio to see if he could track down one of the old photographers. He wanted photos of the Ghanaian musicians to accompany his music compilation.

“And believe it or not, the guy was there, the photographer, and, he said, 'How can I help?'” he recalls.

Ben Redjeb asked to see some photos of the bands who used to play in Accra and was led to the back of the studio, where dozens of boxes lined the shelves.

“I stayed in that room for about three, four hours. And all the pictures were in small boxes, yellow Kodak boxes, and were all marked with a marker. ... I could see K. Frimpong and the Cubana Fiestas, African Brothers at Accra airport, Uhuru Dance Band traveling to England," Ben Redjeb says. "So it was really like a goldmine in a way.”

Back in the 70s, Ghana was a musical petri dish. Soul, afrobeat and jazz mixed with funk and highlife. Bands from around Africa and abroad came to Ghana to perform, like the Cote d'Ivoire group Pierre Antoine & Vis-a-Vis.

But then it came to an end. Toward the end of the 1970s, political instability and curfews closed down the clubs.

“If you have curfews and the musicians cannot play the whole scene went dead," Ben Redjeb says. "And this for basically political reasons that did not bring the country any way further, you know? So it's a very sad story. And we are left with all of these pictures to actually remind you — and all of this music to remind you — of what was going on."

Ben Redjeb sought out the musicians featured on the compilation to ask permission to use their songs. He also included interviews with them in the colorful, 44-page CD booklet.

Some musicians were surprised to see the songs resurrected, he says. Others expected it, saying if you do something good, it should be remembered forever.