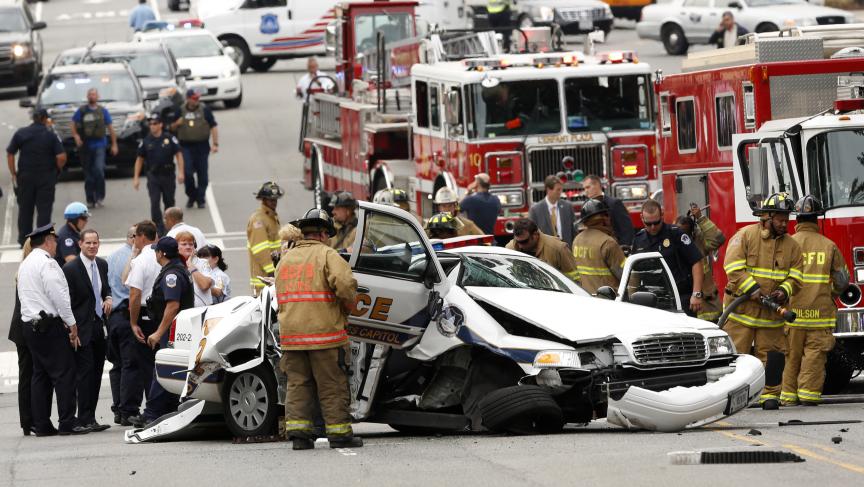 Rescue personnel stand around a smashed U.S. Capitol Police car following a shooting near the U.S. Capitol in Washington, Oct. 3, 2013. The Capitol was briefly locked down on Thursday after gunshots were fired outside the building.

A woman is dead after attempting to enter the White House grounds Thursday afternoon and then leading police on a chase through the streets of Washington, DC to the Capitol.

In the course of pursuing the woman, two different federal law enforcement agents, a Secret Service officer and a Capitol Police officer, were struck by the woman's vehicle and injured.

Video taken of the chase shows the vehicle surrounded by officers, with guns drawn, trying to get the woman to leave it. A short time later, the woman backed into a police cruiser and toward police officers before taking off at a high speed. Washington Metropolitan Police Chief Cathy Lanier said officers fired at the fleeing car.

The chase ended near the Hart Senate Office building, Lanier said — the second place where officers shot at the vehicle.

Lanier praised Secret Service and Capitol Police, and said the defensive barriers in place had worked well. She also revealed that a 1-year-old child had been rescued from the vehicle after it was stopped — prompting reporters to ask if this incident might have been an accident.

"This does not appear to be, in any way, an accident. This was a lengthy pursuit," she said.

The child is receiving medical treatment at a Washington-area hospital, as are the two injured officers. None have been injured seriously.

"All of the security around the Capitol worked extremely well," he said.

The Capitol was locked down briefly while the chase came to a head, but business resumed quickly.