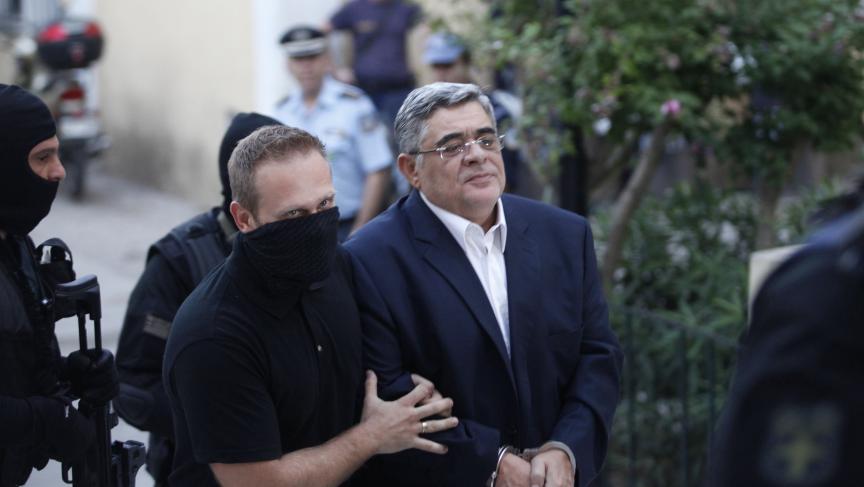 Far-right Golden Dawn party leader Nikos Mihaloliakos (R) is escorted by anti-terrorism police officers as he arrives at a courthouse in Athens September 28, 2013. Greek police arrested Mihaloliakos and more than a dozen senior members and lawmakers from the far-right Golden Dawn party on Saturday after the killing of an anti-fascist rapper by a party supporter triggered outrage and protests across the country.

Being called any combination of "extreme," "far-right," and "anti-immigrant" has never been a problem for Golden Dawn. But in the past, if you dared to call them Nazis or fascists, they'd be sure to take exception. This despite the fact that a Golden Dawn anthem includes lines such as: "We want a new Greece that will cover all the earth."

But now, in the wake of the arrest of a number of the party's high-ranking members, the media seem comfortable calling Golden Dawn what it really is: a neo-Nazi party.

Golden Dawn, or Chryssi Avgi as it's known in Greek, has been around since the early 80s. But for years, it stayed firmly on the fringes of Greek society. But an influx of immigrants - many of them illegal - from Africa, Asia and the Middle East into Greece changed the equation.

Then, a few years ago, Golden Dawn decided to stop fighting Greek leftists and anarchists.

"They established themselves in poor neighborhoods with high numbers of undocumented immigrants," says Giannis Papadopolous, a reporter who has reported extensively on Golden Dawn for Greece's Ta Nea newspaper. "And in many neighborhoods, we had racist attacks. People with darker skin couldn't walk through main squares. Sadly, some people felt this was for their own good."

And Golden Dawn's promise of protection against immigrants gradually extended to other areas, says Brady Kiesling, a former US diplomat turned author living in Athens.

"For example, let's say you rented your apartment to an immigrant, and then suddenly discovered that there were 15 immigrants living in the apartment, and no one was paying the rent. And then you went to court, and the court told you the trial would start in a year and half and charged you more than $200."

"You'd get annoyed," Kiesling says, "and then go the local Chryssi Avgi office. Chryssi Avegi would send 15 thugs, and your apartment would be empty."

Golden Dawn's xenophobic attacks -- both physical and verbal -- struck an even bigger chord when the austerity measures mandated by the European Union began to hammer the country.

When I was there for elections last May, young voters in particular turned out to support Golden Dawn. "I voted for Chryssi Avgi, Golden Dawn," one young man told me, "because immigrants have ruined the center of Athens."

"Last year's election showed a massive political vacuum," Kiesling says. "Any kind of political creature that could walk on two legs could profit from that, which is what Golden Dawn did."

Suddenly, what was once a fringe group was a political party with a significant presence in Parliament. And as the economy continued to worsen, Kiesling says, Golden Dawn became all the more attractive.

"There's a huge number of unemployed people in Greece, and the ones with Golden Dawn were given a social role to play, which for many was the first vaguely social role they ever had."

Passing out food and clothes to the poor, for example. But not before checking identification to make sure the people getting help from Golden Dawn were "true Greeks."

Kostis Papaioannou, who helps run the Athens-based Racist Attack Recording Network, says Golden Dawn gangs have been acting like vigilantes. "When they find immigrants," he says, "they go and ask them where they are from, and before or after getting an answer, they violently attack using knives, and broken bottles and chains."

But the authorities couldn't seem to pin anything on Golden Dawn, which might be due to the alleged criminal ties between Golden Dawn and the police.

"They run rackets together, they compete in other rackets," says Brady Kiesling. "The Greek police have been feeling unloved for many years, and Golden Dawn said, 'You're our guys. We're the party of pimps and protection rackets. But we're also the party of the police.'"

And then, two weeks ago, 34-year-old anti-fascist rapper Pavlos Fyssas was stabbed to death by a Golden Dawn member.

That led to a sudden crackdown on Golden Dawn's leadership.

"The main factor was that it was a Greek man. Society cared more. It was one of them. One of us," says Ta Nea's Giannis Papadopolous, who then describes what police found when they raided the house of the Golden Dawn's leader Nikos Mihaloliakos.

"First of all, Mihaloliakos calls himself  - and Golden Dawn members call him - 'the Fuehrer,'" he says. "He is a truly and clearly a neo-Nazi. Police found in his house following his arrest a big portrait of Hitler in his room, and they also confiscated two handguns and one pistol for which he did not have a license."

Papadopolous says the recent crackdown hardly spells the end of Golden Dawn. But maybe, he says, it's the beginning of the end.

For their part, Golden Dawn's members are still defiant. On leaving the courthouse yesterday, two of them shouted at reporters: "Golden Dawn forever. Get that into your heads!"

Former American diplomat Brady Kiesling says that it may indeed feel like forever. The Greek justice system, he notes, moves at an agonizingly slow pace, and has a terrible track record when it comes to "building airtight cases against complex organizations."

And what of Golden Dawn's political future?

Kiesling says the Greeks who turned to Golden Dawn out of frustration in the last election may change their minds again.

"Greeks are keenly aware the world is watching them," he says. "Suddenly they see the government is taking action against Golden Dawn, and they figure they'd better pull back a bit, and go back to being ordinary, mainstream, center-right, and slightly bigoted."