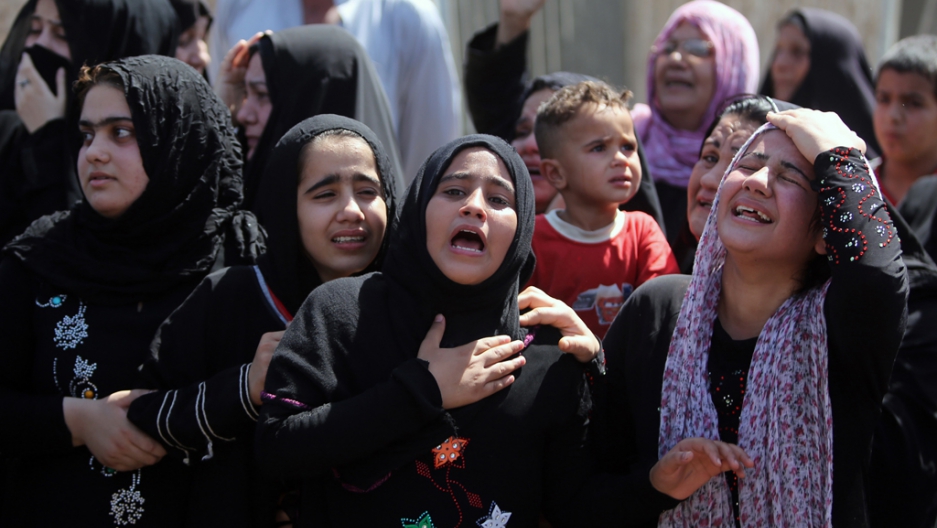 Iraqi girls mourn the death of a relative who was one of the victims of the attack on a Shiite mosque in Baghdad's northern neighborhood of Kasra on September 11, 2013. Another suicide bombing on September 14, 2013 killed at least 21 people.
Credit: AHMAD AL-RUBAYE
Share

There was more grim news out of Iraq Tuesday — nearly 1,000 people were killed in the country in September, according to a report from the United Nations' mission there.

The surge in violence threatens to destabilize Iraq's fragile statehood.

Forty-six people were killed in the latest bombing that targeted a funeral in the nation's south, as violence has become a near-daily part of Iraqi life in recent months.

A total of 979 people died in Iraq last month, according to the report, 92 of them from Iraq's security forces.

The number is just shy of July's five-year high of 1,057, the Associated Press noted.

The bloodshed was particularly high in Baghdad province, where 418 people were reportedly killed.

Nickolay Mladenov, special representative for the United Nations Secretary-General for Iraq, called upon Iraqi authorities Tuesday to redouble their efforts to end the violence.

"As terrorists continue to target Iraqis indiscriminately, I call upon all political leaders to strengthen their efforts to promote national dialogue and reconciliation," he said.

"Political, religious and civil leaders as well as the security services must work together to end the bloodshed and ensure that all Iraqi citizens feel equally protected," he added.

More from GlobalPost: Q&A: What's behind the spike of violence in Iraq?