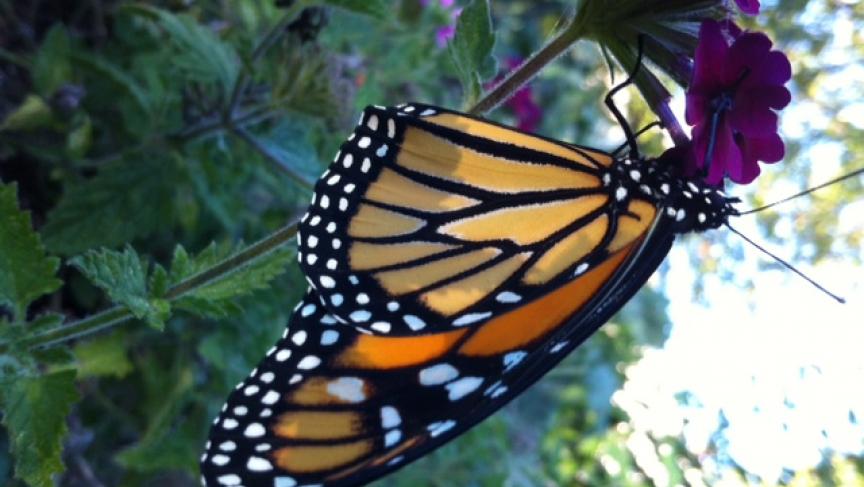 Swan Island, in Maine's Kennebec River, is the perfect summer home for the monarch butterfly.

Bob Gobeil, a volunteer for the Maine Butterfly Survey, and his wife Rose Marie traipse through fields of yellow and purple wildflowers past an old clapboard farmhouse. Bald eagles soar overhead.

"These fields should be full of flying monarchs because of the amount of milkweed, literally acres, it's almost perfect for butterflies,” Gobeil said. “If you're looking for monarchs, milkweed is the key."

With its white sap, cottony seeds and big green leaves, it's the one plant that one of the continent's most familiar butterflies can't live without. But this year, even in this forest of milkweed, no monarchs. Monarch butterflies have nearly disappeared from much of their range this year.

"The monarch is so bright," Rose Marie said. “It's large, and it's usually in abundance. So people just see it. But to have that absence is really strange”.

The reports are the same all across the country — few or no monarchs in places where they should be common.

A couple of hundred miles south, school kids use magic markers to color paper monarchs at the Boston Nature Center, an oasis of meadows and forest in the heart of the city.

Here, too, the real thing is missing. Karen First is a member of the Monarch Teacher Network, a group that uses butterflies to teach kids about nature.

"It's been very, very quiet in the butterfly garden at the Boston Nature Center this summer. In years past, it's been teeming with butterflies," she said. "And it's that silence that really began to alarm me."

It's an alarm that's been ringing all across the monarch's range.

"It’s a migration phenomenon, says Omar Vidal, the director of the World Wildlife Fund in Mexico.

"So, if there is mortality or low numbers in the US, then we have small numbers in Mexico," Vidal said.

Mexico is the first leg of an epic migration that takes most of North America's monarchs from remote mountain tops south of the border all the way across the US to Canada — and back.

Think of it like a relay race. The first generation begins its journey in Mexico every spring, and over the next year, three generations or more head north, reproducing, dying, and passing the baton to the next, ultimately ending up in places like Boston and Maine — and points farther north.

Then that final generation flies all the way south back to their ancestral forests, sometimes to the very trees where their great-grandparents had spent the winter the year before.

For years, it was that key part of the monarchs' habitat that was under attack, from illegal logging.

"We received a lot of criticism from the US in particular that Mexico was not doing enough. They were right," Vidal said.  “Mexico has begun to take steps to protect its remaining monarch habitat. But now there are new threats to the north.”

Chip Taylor is an insect ecologist at the University of Kansas and founder of the group Monarch Watch.

“All in all, the last two breeding seasons have been just a disaster for monarchs and this is going to be the lowest overwintering population ever," he said.

Even as conditions have improved in Mexico, extreme weather in the US and Canada over the past two years has ravaged monarch populations, says Taylor. Last year, fewer monarchs returned to Mexico than ever before, part of a steady downward trend over two decades.

“In the past, a bout of bad weather wasn't enough to send populations spiraling, but that combines with a decline in the habitat that supports monarch butterflies,” he said.

And that brings us back to milkweed.

Not long ago, Taylor says, the vast corn and soybean fields of the US midwest supported enough milkweed to ensure plenty of monarch habitat. The turning point, he says, was the year 2000, when farmers began using genetically-modified crops that are designed for the use of the herbicide glyphosate, or Roundup. And of course the use of more herbicide-resistant seeds meant the use of more of the herbicide.

"After 2000, when we saw the adoption of Roundup-ready corn and soybeans began to skyrocket, then we began to see the monarchs decline and they declined with the disappearance of milkweed," Taylor said.

To be clear, the problem isn't the GMO crops themselves. Taylor says it's the herbicide that goes with them, which is only doing what it was designed to do — kill weeds, like milkweed.

Some scientists have criticized the research linking Roundup to a decline in monarchs. Monsanto, the company that makes the herbicide, hasn't said much at all. But Taylor and others say the result of the huge increase in Roundup has been devastating for monarchs. The bad weather of the last two years seemed to have been the last straw for many more.

Taylor says monarchs are a very resilient species and aren't likely to disappear altogether. But he worries that if their habitat continues to dwindle,  their grand, continental migration could go with it.

Which raises a basic question for him.

"Does the average person miss a monarch if it's not there? Probably not," he said. "That's really bothersome because I don't see that we connect very well with nature anymore."

Back in Boston, teacher Karen First releases a tagged monarch before an excited crowd of 4- and 5-year-olds, many of whom have never seen one. She's doing her best to make sure these kids know about monarchs, even if no wild ones actually show up.

"I'm more worried that the story is going to disappear," she said. “They just have this amazing story. It is the perfect way to get kids to care, and I really believe that as kids grow up, they're going to work to save the things they care about."