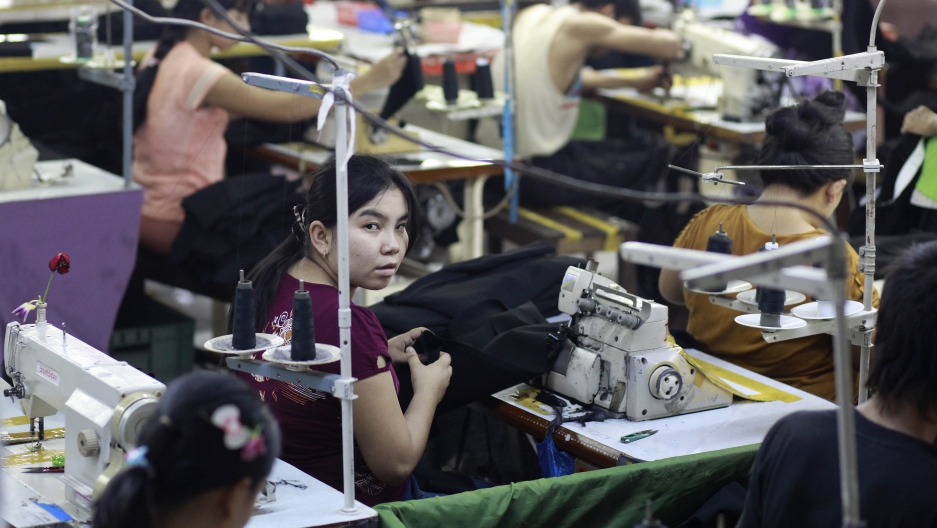 As sanctions against Myanmar are lifted, she may soon stitch your clothes. Good news?
Credit: Ye Aung Thu
Share

YANGON, Myanmar — On the roads leading into one of Myanmar’s largest industrial zones, South Dagon, the potholes are big enough to bathe in.

Inside factories, hives of workers toil for 12-hour stretches in cavernous cement rooms where the power shorts out frequently and the air is stale and humid.

America’s closets are filled with blouses and jeans stitched by poor women hunched over sewing machines in tropical countries. And soon, as American and European sanctions melt away, Myanmar will join the list.

This nation of 60 million is impoverished, plagued with joblessness and corrupt to the roots; in other words, it is an ideal playing field for global garment exporting conglomerates.

Within the international clothing trade, there is little doubt that Myanmar’s garment export industry is set to boom. It has the demographics: 75 percent of the population is aged 15 to 64, the range considered “working age” in the developing world. It has the desire: many of them are eager to get out of the sun-baked fields and under a factory roof. And it has the location: wedged between Asian powerhouses India and China.

Myanmar intends to industrialize at breakneck speed and — like Cambodia, Bangladesh and Vietnam before it — the nation hopes to stitch its way out of bleak poverty. Economists call the garment industry a “first rung” on the development ladder. The trade requires tons of labor and, with a little training, can quickly turn an illiterate rice farmer into a sewing machine operator.

“I don’t even care if they’re disabled,” said M.M. Fahim, a factory operator in South Dagon who supervises 3,000 workers. His plant, which ships primarily to Europe, makes the type of sportswear uncommon in sweltering Myanmar.

“My workers just need eyes and hands that work,” he said. “That’s all.”

More than 15 years of Western sanctions — intended as punishment for totalitarian military rule — have left Myanmar’s economy cloistered and stunted. Only two years have passed since a junta handed power to a quasi-democratic parliament and Myanmar entered a new era of reform. But its leadership is already eager to see exports explode.

The president, an ex-general named Thein Sein, has vowed to triple the national economy in just three years.

All of the dysfunction that scares other industries away from Myanmar — power shortages, bureaucrats on the take — are standard fare in the garment exporting industry, according to David Birnbaum, an American international garment industry consultant and five-decade veteran of the trade.

“This industry works in corrupt countries. You’ve got corruption, people with guns, but it’s not a major problem for us,” Birnbaum told GlobalPost. “No electricity? We can live without electricity. China, for 20 years, barely had electricity.”

The larger question hanging over Myanmar’s industrial future is this: can factories steer away from the horrific conditions in Bangladesh, now notorious for a fiery April factory collapse blamed on shoddy conditions that left more than 1,100 dead?

“There’s not a single factory I saw ... that would pass compliance,” he said. “The place has been asleep for 10 years. They have no idea what the global industry looks like.”

And yet he is hopeful. Spurred on in part by the public relations nightmares coming out of Bangladesh — the world’s second-largest source of exported clothing and a major supplier to the US — major players in the industry is more eager than ever, he said, to improve factory standards.

“The professionals in the industry don’t want that image,” Birnbaum said. “They know it’s going to come back and kick them in the ass.”

Myanmar has only recently started to shed a reputation for abuse acquired under the now-defunct junta, a kleptocracy that suppressed all dissidence and cowed citizens inside a police state. Harsh sanctions levied by the George W. Bush administration in 2003 laid waste to a garment industry that once relied heavily on American shoppers.

Before the sanctions, which effectively banned all exports out of Myanmar, clothing accounted for roughly 80 percent of the nation’s exports to the US, according to Toshiro Kudo, a researcher with the Japanese External Trade Organization. The sanctions’ effect was devastating: more than 100 factories closed and as many as 80,000 workers lost jobs. Shame campaigns out of America and Europe had already compelled heavyweights such as Levi Strauss and Sara Lee to pull out of the country.

Ten years on, Myanmar is still filled with factory-ready seamstresses. Khine Khine Nwe, secretary of the Myanmar Garment Manufacturers Association, recently released a figure to local media that defies belief: 90 percent of all employed women in Myanmar work within the garment industry, she said.

As Western nations continue to clear away a thick web of sanctions against Myanmar, it is assumed that garment exporters will come flooding back. The Myanmar-focused Bagan Capital investment firm told trade media outlet Just Style that, once all sanctions are cleared, annual garment exports could increase by up to 200 percent.

Garment industry leaders assume that their return to Myanmar will require pay-offs to bureaucrats, Birnbaum said. But they will seek what he calls “efficient corruption”: bribes that actually work.

“You want to charge $200 per container? Fine ... but you’ve got to clear it. Corruption is not only about power. It’s a business. So it has to be run that way.”

With such little regard for Myanmar’s government both within and outside the country, he said, decent factory conditions will rely on goodwill among the local operators and the global conglomerates. He is confident that corporations he considers the “real professionals” — Levi Strauss, America’s behemoth clothier VF Corporation, UK’s Marks & Spencer — would provide assistance if Myanmar garment magnates simply declared that “we don’t want to be Bangladesh.”

And yet Fahim, the Sri Lankan-born factory boss in South Dagon, speaks of Bangladesh’s rock bottom stitcher salaries with a tinge of envy. He pays roughly $110 per month for a stitcher; Bangladesh, though soon to raise its minimum wage for garment workers, pays roughly $40. Fahim also spends tens of thousands per year bussing in villagers to a government-designated industrial zone — a move that, he said, is cheaper than building on site dorms and dealing with the inherent tumult in running a small commune at the factory site.

“Ten workers, to me, that’s 10 headaches,” he said. “But I can’t just move this entire building over to Bangladesh.”