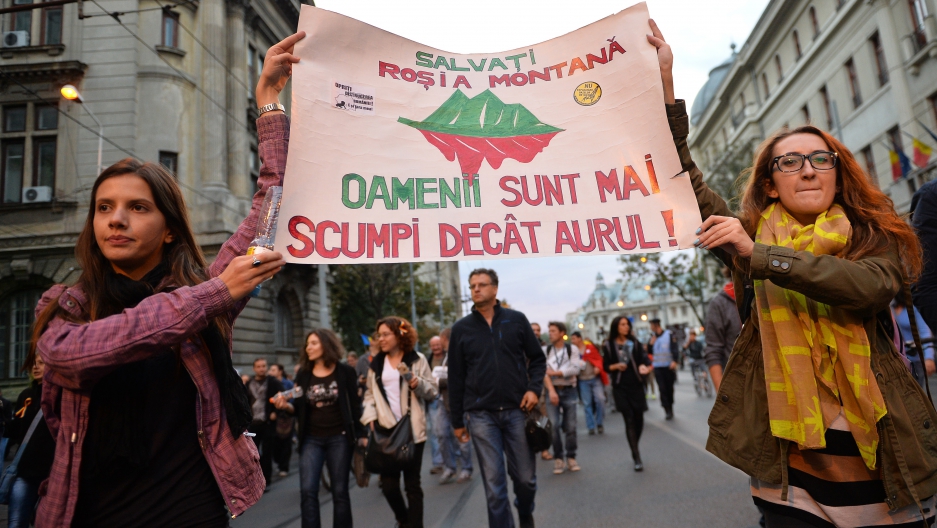 BUCHAREST, Romania — What started earlier this month as a protest against plans to create Europe’s largest gold mine here is ballooning into a growing movement against government inefficiency.

Such is the public anger that when a police negotiator approached a group of protesters making a banner ahead of a demonstration in the city center last week, it was to express solidarity.

“I may even join you in my free time,” he said.

The banner depicted a green mountain intersected by a red, polluted lake — for use at one of many protests against plans for Romania’s Rosia Montana, or Red Mountain, a bucolic area in the region of Transylvania.

Gold mining there dates back to the late Stone Age. But environmental concerns are now prompting many Romanians to want to break with history.

Thousands of people have been regularly gathering for anti-mining marches in Bucharest — up to 20,000 last week, twice the number of protesters than two weeks earlier and four times more than the first demonstrations in early September.

Romanians have been shutting down major streets in the capital and other major cities chanting, "United we save Rosia Montana!"

"Our conscience is at stake,” says protest organizer Mihail Bumbes.

The protests’ main target is the Canadian company Gabriel Resources, which, together with the Romanian state-owned company Minvest SA Deva, plans to extract almost 250 tons of gold. The $2 billion project is at the center of a government investment program unveiled in July.

Although the companies won a license with no bidding as early as 2000, obtaining the necessary permits has taken 14 years.

The project promises to generate more than 2,000 jobs at a time the country is struggling to rebuild its economy since it was granted an international bailout during the 2009 recession.

Romania has a dark history with cyanide: 13 years ago, a leak of the highly poisonous chemical in the northern industrial city of Baia Mare tainted the Danube and four other rivers flowing through three countries. Fears of similar disasters are a main motivate for the protests.

"I came here so you could see that we're still alive," Rosia Montana resident Eugen David said at a rally earlier this month.

However, analysts say the protests have grown from an environmental movement into a venue for Romanians to vent their frustrations with the government’s overall poor performance.

"Rosia Montana’s story brings together the entire pathological corruption and incompetence in Romanian politics, and the illegitimate practices of some companies," says Claudiu Craciun, lecturer at the National School of Political Sciences and Public Administration in Bucharest.

Prime Minister Victor Ponta’s government approved a draft law that would enable the project to go ahead last month.

Since then, however, anger over what appears to be an inordinately sweet deal for a foreign company has helped fuel the unrest.

Even President Traian Basescu, the project’s former champion, now believes the law would unfairly benefit the Canadian-Romanian consortium. "You can’t create a law addressing a company,” he told reporters. “It will be rejected by the Constitutional Court."

"I don’t trust our politicians, regardless of the party they represent,” he says. "They all seem partisans of an aggressive capitalism. It’s not the first time politicians have tried to take over the voice of the street and manipulate it in their own interest.”

Last week, Rosia Montana Gold Corporation rejected assertions that it benefited from favoritism in a statement.

"According to RMGC policies and practices to prevent corruption (a document signed by all directors, employees, consultants and business partners), contributions to the political parties or political candidates are prohibited," the statement said.

Shares of Gabriel Resources listed on the Toronto Stock Exchange have plunged since the protests began.

Romania is only one of the company's problems. Earlier this month, the Swiss authorities raided the Geneva house of the company’s main shareholder, Israeli diamond billionaire Beny Steinmetz, during a probe into bribery and iron mining in Guinea.

Back in Romania, counter protests have added to the sense of chaos.

But anti-mining protesters aren’t letting the issue go. A recent survey found that 32 percent of Romanians oppose the project.

That proportion corresponds with the growth of a class of educated, skilled younger families who are becoming fed up with the government’s failure to grow jobs and improve public services.

Their participation in the anti-mining movement has helped galvanize a wave of popular sentiment that’s been rarely seen since the collapse of communism in the late 1980s, says Cristian Ghinea, director of the Romanian Centre for European Policies.

"We have a growing middle class keen not only in consumption, but also interested in seeing something new in politics,” he says. “It's similar to what happened in the West, in the '60s and the '70s.”

Basescu isn’t the only politician to have adjusted his stance on the projects since the protests heated up.

Ponta has become a target of satire after he announced he would vote against the company’s plan even though it was proposed by his own government.

The prime minister has also admitted that Gabriel Resources could sue the country if the parliament rejects the plan.

As the protests continue, the project’s fate remains uncertain. Parliament has set up a special committee to investigate the draft law and “facilitate a decision” by lawmakers.

The words of Senate President Crin Antonescu, co-leader of the governmental coalition, don’t bode well. "The project is producing a significant split in Romanian society.”

He also believes the draft law should be rejected.