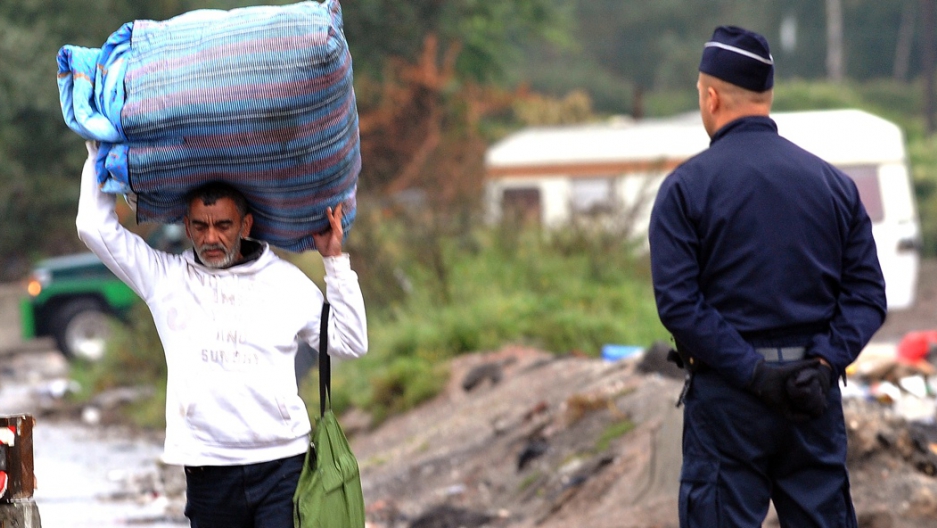 Police evacuate Roma from an encampment near the French city of Lille this month.
Credit: Denia Charlet
Share

BRUSSELS, Belgium — Wherever one looked in Europe this summer, there was bad news for the Roma people — the gypsies — and it's prompting concern that hardening attitudes are making life more difficult for some of the continent’s most disadvantaged people.

In France, Interior Minister Manuel Valls said Wednesday "The majority (of Roma) should be delivered back to the borders...We are not here to welcome these people. I'd remind you of (former Socialist premier) Michel Rocard's statement: 'It's not France's job to deal with the misery of the whole world.'"

In the Slovak city of Kosice — chosen as a European capital of culture this year — residents erected a 6-foot wall to segregate a Roma neighborhood.

August saw police battle with hundreds of far-right protesters who tried to storm Roma districts in towns across the Czech Republic.

Three men were sentenced for life in Hungary for a string of racist attacks that killed six Roma, including a 5-year-old boy.

Farther west, there were high-profile cases of Roma evictions in Italy, France and the Netherlands.

At the height of the Italian summer, the authorities cut the water supply to a camp of 300 Roma near Turin. And a report in Spain showed the economic crisis hitting the Roma there disproportionately hard, with two-thirds now living below the poverty line.

In France, Gilles Bourdouleix, a member of parliament and mayor of the town of Cholet, was forced to resign from his center-right party after reportedly muttering that "maybe Hitler didn't kill enough" during a visit to a Roma settlement.

Estimates vary, but many believe up to 500,000 Roma died during the Nazi extermination survivors call the Porajmos, or the Devouring.

"Roma increasingly are becoming the scapegoats for wider societal ills," he said in an interview from his base in Budapest.

"It's not just a hard core of hate from the far right. Much of this disparaging rhetoric, prejudicial speech is seeping into the political mainstream who will use it for political gain. This is a deeply worrying trend."

Europe’s roughly 12 million Roma make up the continent’s largest ethnic minority. In many countries, they are also the most under-privileged.

A survey last year by the European Union's Fundamental Rights Agency found that 1 in 3 is unemployed, 20 percent have no health insurance and 90 percent live in poverty.

"Many face prejudice, intolerance, discrimination and social exclusion in their daily lives,” the report said. “They are marginalized and mostly live in extremely poor socio-economic conditions.”

Whether in grim housing projects surrounding the cities of central Europe, isolated villages in the Balkans, shanties of cardboard and corrugated iron under Roman overpasses or shabby trailer parks around Paris, many of Europe's Roma live at levels of poverty associated with developing countries.

Recent EU surveys have shown just 44 percent of Roma have completed primary education, a third have never visited a dentist, and that just 2.7 percent are older than 65, compared to 17 percent of all EU citizens.

EU headquarters has allocated hundreds of millions of dollars to improve conditions for the Roma and tasked the bloc's member countries to set up "integration strategies" designed to improve education, employment, health care and housing. But the European Commission complains governments are failing to meet targets or fully use available funding.

"In general, the socio-economic situation of the Roma in the past years has not been improving," says Dezideriu Gergely, executive director of the European Roma Rights Center, also based in Budapest. "On the contrary, you can say that it has been deteriorating, so the gap between the Roma and the non-Roma is getting even higher. That means the divisions are much more clear."

Rather than help, campaigners say local officials often exacerbate problems and heighten divisions between Roma and their neighbors.

The authorities in Kosice have said they would dismantle the wall there to comply with demands from the EU, but Slovakia's second city is just one of 13 municipalities across the country that have thrown up such barriers around Roma communities in recent years.

Across much of Central Europe, Roma children face segregation at school: a UN survey found that more than 40 percent in Bulgaria and Slovakia are taught in segregated classes. Worse, many Roma children are placed in special remedial schools, including up to17 percent in the Czech Republic.

Anti-Roma sentiment has been fanned by the success of virulently anti-Roma far-right parties that have seen their support balloon in the tough economic times. Hungary's Jobbik won 12 percent in 2010 elections, Golden Dawn in Greece tallied 7 percent last year, and Bulgaria's Ataka secured a similar score in a national vote this May.

"Anti-Roma prejudice predates the financial crisis and has thrived in good times and bad alike, but what we are seeing is a shift from traditional prejudices to openly racist statements, attitudes and actions by extremist parties that seem to be making some gains," Rorke says.

Although there are long-established Roma communities living in Western Europe — notably in Spain, Portugal and Ireland — the largest concentrations within the EU are in the east. They make up an estimated 10 percent of the population in Bulgaria, 9 percent in Slovakia, 8 percent in Romania and 7 percent in Hungary.

Since those countries joined the EU in 2004 and 2007, many Roma have moved west, taking advantage of the border-free travel arrangements across most of the 28-nation bloc. Numbers are hard to come by, but Eastern European Roma have become a common sight on the streets of Paris, Berlin, Brussels and elsewhere.

Although most say they’ve come to find jobs and escape poverty and discrimination at home, the visible presence of Roma begging on sidewalks or in subway cars, complaints from the neighbors of Roma camps, and media reports of migrant involvement in petty crime have fueled a public and political backlash.

In France and Italy in particular, Roma camps have been attacked and politicians have taken a hard line.

When it was in opposition, France's center-left denounced an expulsion policy in 2010 under then-President Nicolas Sarkozy. Nevertheless, his Socialist successor Francois Hollande has continued the deportations, sending 13,000 Roma back to Romania and Bulgaria last year.

And although Bourdouleix's Hitler remark has been widely condemned, other politicians have competed to blame the Roma for crimes and public disorder in the run up to municipal elections across the country early next year.

In August, far-right leader Jean-Marie Le Pen said the Roma community in the Riviera city of Nice were an "itchy and smelly presence." The city's center-right mayor responded by announcing he was installing cameras at a Roma encampment to monitor "delinquents."

Another local politician risked legal action for a tweet that appeared to condone the firebombing of Roma camps. And the center-right candidate for mayor of Paris, Nathalie Kosciusko-Morizet, accused the Roma of "harassing" Parisians during a television interview on Wednesday.

Analysts say such actions help assign collective blame and stigmatize the entire group of Roma, and that there’s no sign the momentum will let up anytime soon.

"Politicians see the presence of the Roma as an opportunity to gain votes through a very open anti-immigration agenda," Gergely says. "There is no counter-balance."