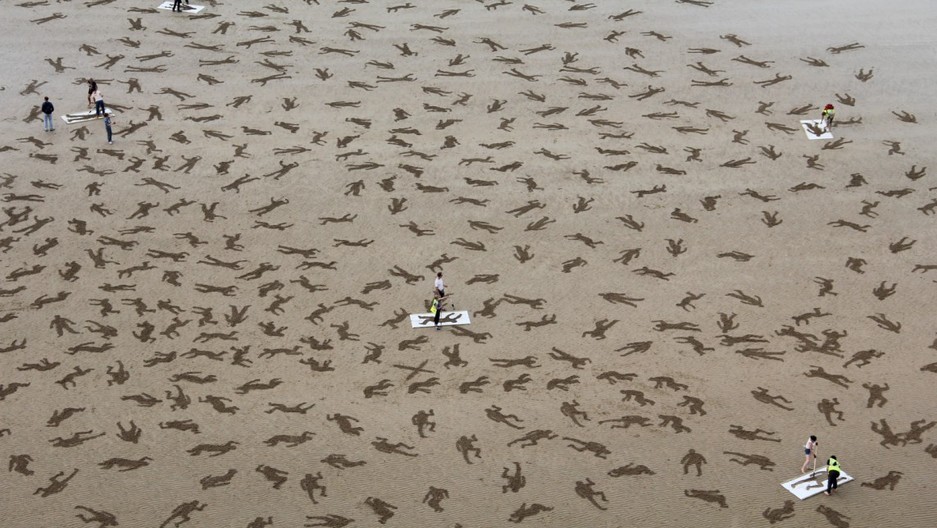 The art installation called The Fallen, created by Sand In Your Eye, was setup recently on Arromanches Beach, Normandy, France, to depict the bodies of the 9,000 soldiers and civilians who lost their lives during the Allied assault on Nazi-occupied France on June 6, 1944.

Jaime Wardley/Sand in Your Eye

The place were looking for in our Geo Quiz has a codename.

Gold Beach was the code name used in World War II for one of the places where Alllied troops landed on D-Day, the June 6, 1944 invasion of Nazi-occupied France.

So we're talking a beach along the northwestern coast of France.

And if you can name it, you'll  also be interested to hear what happened there the other day.

A team of artists went to work there to honor the sacrifice of thousands of soldiers who lost their lives on this beach during the Allied invasion of Nazi-occupied France.

So can you name the beach?

British artist Jaime Wardley is part of the team that recently created an art installation called The Fallen.

The location was Arromanches Beach, Normandy, France, the answer to our Geo Quiz.

The idea was to use the beach itself as the canvas and to create silhouettes in the sand representing the estimated 9,000 Allied and German soldiers, paratroopers, and civilians who lost their lives there on June 6, 1944.

Wardley, artistic director of Sand In Your Eye, said the idea behind The Fallen was to create a "visual representation of loss on an unimaginable scale."

"We tried to ask people to take a moment when they're doing a stencil and think about what it would be like to be (that) person," he said. "It really impresses on your soul."