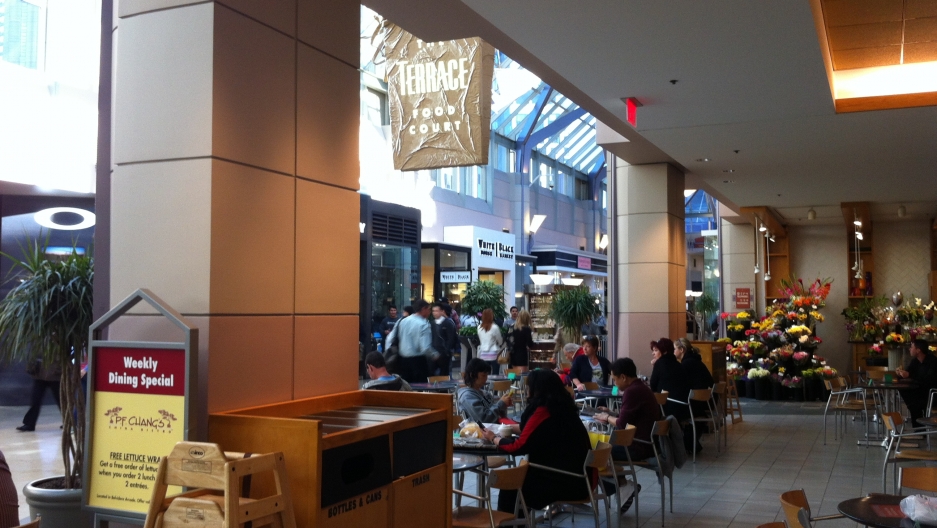 The food court at the Prudential Center.

The attack at the Westgate Mall in Nairobi is haunting.  As I watched the photos pouring out of this mall halfway around the world, I couldn't help but think of the Galleria in California where I grew up.  I spent hours at the mall as a teen without buying a thing.  I worked there and hung out there and drank a lot of Orange Julius.  A familiar story. So, what draws us to these places?  I went to the Prudential Center here in Boston, to the food court, to ask. The answers were varied:

"My daughter was growing up, all the moms would come here in the winter and the girls would run around."

"We like to go to the church in the Prudential Center and then we grab something to eat... me and my husband."

"Everything you need is within this mall you don't have to go several places to get what you want."

It's a space to buy things, sure, but it can be so much more: part church, part playground, a pseudo community center and the subject of countless movies like Mall Rats.   Remember that slacker film from the '90s?

Setha Low studies mall rats. She's a professor of public space at the City University of New York. And she says the concept of an enclosed shopping space is an old one.

"Think of the bazaar in Istanbul from the 15th century; people think of Rome as having interior spaces; if one visits Jerusalem The Souq is an enclosed shopping space," says Low.

According to Low, the modern mall that you and I know came of age in 1950's America and Canada. It was born as a by-product of white flight to the suburbs. And with the suburbs came the rise of the automobile and a dramatic shift in the habits of people who now went from their individual homes to their individual cars to the enclosed mall. This shift came, according to Low, in the name, now ironically, of security.

"People want to live secure lives. We have been producing secured environments in the hopes of becoming safer and more secure," says Low.

The modern North American-type mall went global in the 1970's and 80's. These structures have developed into worlds unto themselves with waterparks, aquariums, and theme parks. There's even a mall with a ski lift in the desert of Dubai. In Africa, says writer Eve Fairbanks, who splits her time between Nairobi and Johannesburg, the mall isn't just a place of fun, or even security, but it can be an oasis from the larger city.

Inside the mall, says Fairbanks, it's pristine; there are clean bathrooms, nice lighting, and a wealth that is seemingly available to almost anyone who enters.

"Nobody is going to kick you out if you're not buying anything," says Fairbanks. "So it can feel like you're accessing and taking part in the rising force of the country even if you don't feel like that."

So what happens when that illusion of an oasis is shattered? Nairobi will certainly never be the same. The Prudential Center is blocks away from Boylston Street where the Boston bombing occurred last spring. And it's still on the mind of Melissa Coppin who works at the frozen yogurt shop Pinkberry.

"Ever since the bombing in Boston, any sudden movement or sound puts people on edge, but you can't stop doing what you're doing. You just keep going. It's scary - a place where you think you can take your family. It's sad, it really is."

And like that, she turns to the next customer.